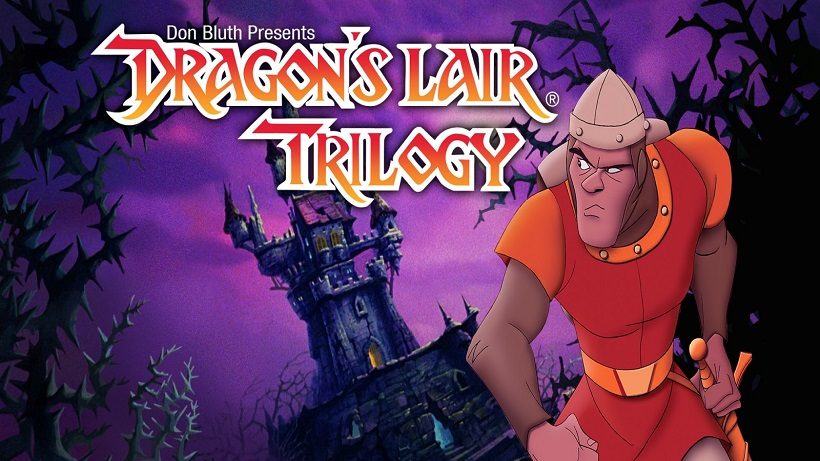 Does the thought of Quick Time Events and their continued presence in video games annoy you? If so, then the Dragon’s Lair Trilogy is not for you. You might think of QTEs being a somewhat modern affliction in videogames, with its peak being around the late 00s, but the true godfather of this mechanic is the trilogy of animated games created by Don Bluth and his team.

Despite the title, there are only two Dragon’s Lair games; the other part of this collection is the second game created by Bluth, the science fiction adventure Space Ace. This is a spiritual sequel to Dragon’s Lair and is functionally identical; even the plot is essentially the same, save for the sci-fi aesthetic.

QTEs make up the majority of the action in these games – press the wrong button and your character’s going to die. At that point, you’re heading back to play the scene over from the start again. You’ll need to nail the timed actions in order to progress to the next part of the scene.

In practice, this sounds more like an interactive DVD, which is for a reason, as the game was also available on the Laserdisc format. There are game elements with this experience though, most notably that you only have a short amount of time in which to press the correct button. That’s where the challenge comes – and you have to balance your button-pressing accuracy with the inclusion of lives and a high score. The former can be extended slightly in the extended options for the compilation and the latter is essentially meaningless as your score resets when you lose all your lives and continue from where you left off; therefore, the number of lives is the only figure you need to keep an eye on.

Being able to retry a scene is crucial, as in the arcade version – which is included in this package – that feature’s unforgiving absence means you’re unlikely to get beyond the first ten minutes. Another helpful and necessary inclusion is the default option to have a move guide displayed on the screen. Whilst this makes the games playable for newcomers, it does result in the contradictory situation in which you’ll find yourself staring at that one section of the screen and ignoring the highly detailed animation going on elsewhere.

This collection should be viewed more as an interactive museum piece, rather than on the merit of its gameplay. The games themselves aren’t exactly fun to play but do provide an insight into the medium’s past. However, the animation is stunning, and it is possible to understand how this was a technical achievement of its time. What’s more, if you do find the gameplay too infuriating, there is now the option to just watch the game instead.

The Dragon’s Lair trilogy is a nicely packaged version of Don Bluth’s classic animated games. Functionally they are better than they’ve ever been, but the gameplay will not be for everyone. It is, though, the best way to experience a piece of video game history.