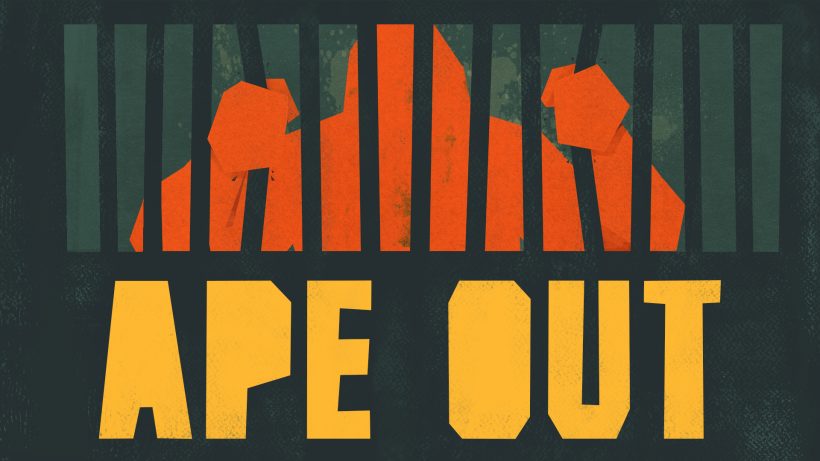 Very few games are able to entice purely based on looks and looks-alone, yet that’s exactly what Ape Out effortlessly managed when it was briefly shown late 2018 in a Nintendo Direct. It immediately captivated with it’s indisputable personality, and was all I could think about for a short time afterwards. I clamoured for more, worried that it wouldn’t live up to the lofty praise I immediately lavished it with. I needn’t have worried. Developer Gabe Cuzzillo cements himself as a creative force to be reckoned with and shows that, sometimes, a first impression is all we need.

It’s not only impossibly but, quite frankly, absurd to talk about the many stylistic merits Ape Out so brilliantly houses without first mentioning how the gameplay and sound design so beautifully and effortlessly marry up. Each level is masterfully brought to life with a jazz undertone and, in the same vein as Newton’s third law, each and every physical action has a percussive reaction. The splattering of enemies against walls or one another results in a symbol crash, akin to that of a dying scream. The more brutal the impact, the louder the crash. As action ramps up, the tempo reacts and increases. Accompanied by the gorgeous, minimalistic 50’s film aesthetic, it’s hard not to be simply enamoured by it all.

Ape Out is not only a sensory delight, but aces on the game-play front, too. By utilising only the analogue sticks and two buttons, Ape Out revels in providing simplistic-yet-challenging gameplay loops, time and time again. Each level tasks you with steering your money mate from point A to point B, and various military types litter the areas in between, attempting to halt you in your tracks. The two aforementioned buttons correlate to a shove and grab action, both of which are primarily used for dealing with the denizens that litter the various environments throughout. Each enemy type wields a different firearm, varying from pistols to shotguns, machine guns to explosives – the somewhat randomly-generated levels spawn enemies throughout, turning each encounter into something that could only be described as a dynamic action-orientated puzzle.

Copious environmental variables are sparingly placed throughout the available locations, whether it be a lush high-rise office or a somewhat-dingy laboratory, that offer momentary respite and/or cover from the eventual onslaught you will inevitably find yourselves in. Whilst it’s certainly welcome in the standard difficulties, it’s outright necessary to utilise in the additional Arcade Mode, throwing more trigger-happy enemies at you in greater volume. Accompanied by strict time limits, as well as a chapter restart upon getting killed, a more tactful approach is a must. No monkeying around here, folks. Sorry.

Ape Out is the embodiment of video game perfection. A clear artistic direction perfectly marries and compliments a simple, yet challenging, gameplay hook that keeps you coming back time after time. Additional challenging modes provide further replayability, and any excuse to keep playing is a good one in my books.