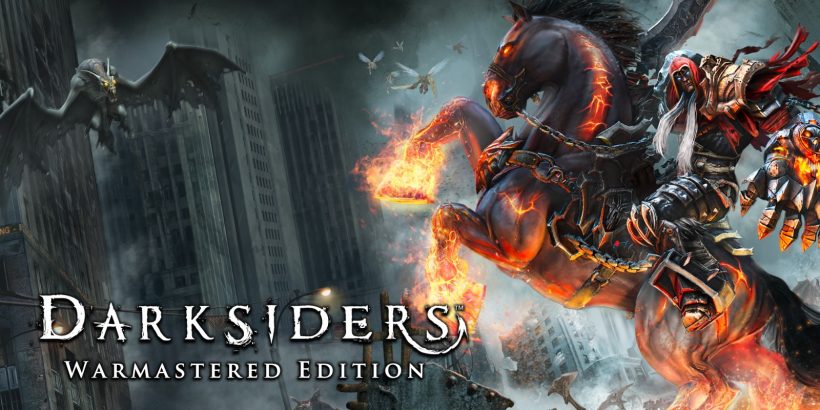 Come, sit by the hearth while I tell you the tale of the late, great THQ. This particular publisher reigned somewhat ceremoniously within the double-A boundaries, all the while having the persona of a triple-A studio. THQ staples – such as Red Faction and Saints Row – would come and go, usually to little fanfare mere weeks after release, but occasionally a new release generated the fervour that the gaming populous fed greedily upon. The original Darksiders was one such title.

Launching at a tumultuous time within THQ’s lifespan, developers Vigil Games’ creation was an adrenaline shot for THQ, hailed as both a critical and commercial success. Its success was essential to THQ who, the following year, sold the rights to Red Faction – arguably their greatest IP. Over the next few years, various studios closed, their IPs sold to competing publishers, but Darksiders – and THQ – still held on, at least for a little while. In 2014, the THQ trademark was acquired by Nordic Games, with the subsequently-renamed THQ Nordic publishing the latest instalment, Darksiders III, in 2018.

The problems faced by Darksiders’ publisher are paramount in appreciating the series’ importance to them. Showing a commendable resistance to starting anew, the original Darksiders was re-released as the cringe-inducing Darksiders: Warmastered Edition in 2016 for the PlayStation 4, Xbox One and PC, with a Wii U version following shortly after. Now, the Nintendo Switch version is upon us. Developed by KAIKO, Warmastered is a purely aesthetical, barebones upgrade, with no changes made to the core gameplay and audio whatsoever. The meticulous lauding of this particular highlight from their back catalogue is undeniably obvious, but it’s clear to see why; Darksiders is an incredible experience to this day.

The story is one of revenge against an unknown entity. War, one of the Four Horsemen of the Apocalypse, is called to Earth before his time was due and, as such, was stripped of all his powers. From here, you’re unceremoniously linked to a demon named the Watcher – played almost Joker-like by Mark Hamill – and sent to Earth to investigate why you were summoned, and by whom. Wielding your oversized sword Chaoseater, entertaining combat is at the forefront of your adventure.

Taking things seriously, despite other facets having a more jovial complexion, is at the core of Darksiders’ DNA. The tonally-serious story finds itself at odds with the comic-like graphical style implemented throughout, which focuses on contrasting colour schemes and over the top, anime-esque asset design. The incredible voice talents of Liam O’Brien, Troy Baker and Mark Hamill are used to great effect, though the over-the-top story beats occasionally seem at odds with their precise, purposeful performances. This disconnect lasts throughout the main plot, but thankfully, it is engaging enough for the aforementioned factors to not be considered derivative.

Darksiders wears its inspirations plainly on its sleeve, with combat harkening back to the PlayStation 2’s greatest, God of War. Enemies appear in droves, as in Santa Monica’s beloved series, offering gallons of blood after very little effort. The simplicity of the combat is circumvented by purchasable skills, as well as hidden items found throughout the various environments. The Legend of Zelda is another clear inspiration, specifically in terms of level design, with Darksiders borrowing heavily from the dungeon designs that we’ve come to know, love, and (occasionally) hate.

The smart design choices are not recreated, however. The camera seems to sit too close to War which, in portable mode especially, can lead to some frustrating combat and platforming mishaps. Combined with the aspect ratio changing when locked on to an enemy, this can quite easily lead to situations where off-screen enemies manage to sneak a few hits in without being noticed. Thankfully, the framerate keeps up throughout even the most hectic of scenarios and alleviates any further potential stress.

The risk of re-releasing a near decade-old game is that the mechanics used throughout have since evolved far from where they used to be. With Darksiders merely imitating instead of innovating, even upon its initial release, some of its encounters and level designs are a slog to get through. While the unique graphical and gameplay characteristics carry the adventure forward, it’s one not necessarily worth revisiting should you have already wandered through the apocalyptic landscapes first presented to our deserving retinas back in 2010.

Darksiders’ unique graphical style has aged well, but its gameplay and mechanics have not. Other games offer more engaging and thoughtful combat and level designs, making Darksiders: Warmastered Edition a tough sell. Not necessarily worth revisiting, if you have experienced it before.