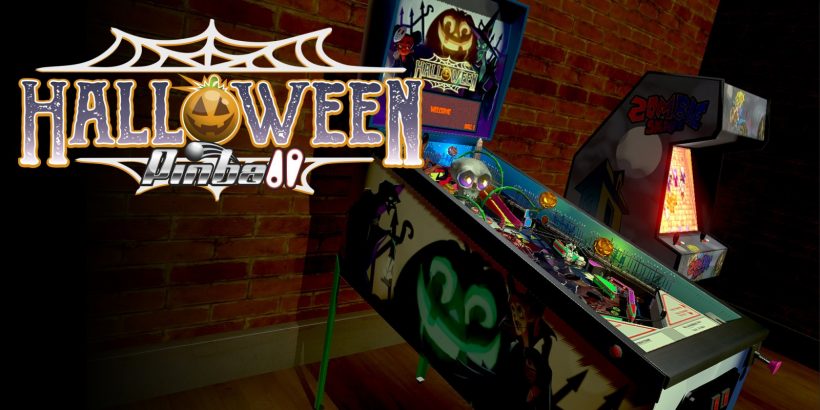 In modern gaming, pinball games are somewhat niche. Aging and forgotten, they are relics of classic Arcades; yet there are a number of pinball titles that have made their way onto the eShop, offering varying game modes, tables and difficulties. Halloween Pinball is one such title, and unlike its competitors, features only one table, and only one mode. So how does it hold up?

As with all pinball games, the aim is to rack up the highest score by hitting the small silver ball around the board. Different areas of the machine activate depending on where the ball travels, allowing for score multipliers and interactions with objects and scenery, and it is often exciting to see where the ball travels next. Tapping the L and R triggers is all that is required to use the respective bumpers, and you pull down on the right analogue stick to launch the ball.

In terms of visual design, Halloween Pinball is pretty much what it says on the tin: a Halloween-themed pinball game, with spooky skulls, grinning pumpkins, gnarled branches and spiked fences adorning the playable area. The accompanying score and sound effects are equally eerie, the volume of which can be customised from within the game’s options menu.

Sadly, the graphics are mediocre at best, and there is little difference in presentation or performance between handheld and docked. While the addition of four different camera modes is very welcome, the default mode is angled too close to the table for comfortable play; as such, the top-down view is much more preferable.

EnjoyUp Games are no strangers to the pinball genre, releasing a steady stream of them on the Switch, all differently themed; Pirates Pinball, Jurassic Pinball, Werewolf Pinball and Mummy Pinball to name but a few. Why they didn’t just release a pinball-themed game package is beyond me, as – especially in Halloween Pinball – you can only enjoy the game in very small bursts.

The reason I say this is that, although in terms of replayability you could play endlessly try again to accumulate a higher score, you’ve only got the one table to play on with no different modes; it’s simply the classic pinball formula. While the game is enjoyable at its core, keeping an eye on the smaller details – in particular the location of your ball – is difficult. Even when playing docked on a bigger screen, it is easy to lose sight of.

Overall, Halloween Pinball is great for fans of the genre and hardcore score chasers, and for the small price tag of £2.69, it’s not a bad deal. I just wish there was more content to allow for longer play periods.

Pick this one up if you’ve got a pinball itch in need of a scratch.

Halloween Pinball will give you a short burst of nostalgic, arcade entertainment. With only one table and just the classic pinball formula on offer, if you’re a fan of the genre and love chasing high scores, you can’t go far wrong; but it does feel lacking.