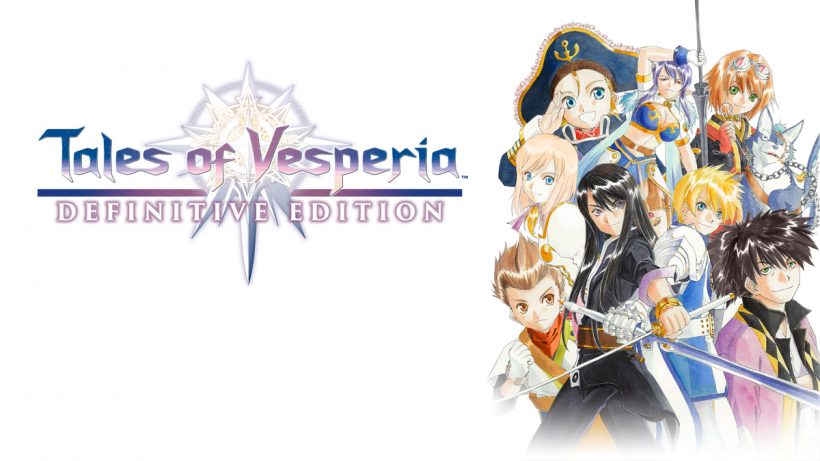 The Tales series is criminally underrated, with Tales of Vesperia being no exception. Originally released back in 2008, Tales of Vesperia: Definitive Edition includes both the full original game and additional content that was missing from the initial Western release. Two new characters – Flynn Scifo and Patty Fleur – are added to the party, as well as new events and costumes, making the game even more fun to play.

Playing as ex-knight Yuri Lowell, you journey with the noblewoman Estelle and your canine companion Repede to recover the stolen aque blastia and search for Flynn Scifo. To save the dejected lower quarter of Zaphias from dirty water with the blastia’s ancient power, an unforgiving world full of monsters and assassins must be overcome.

The compact world map of Tales of Vesperia separates key locations (such as woodland, cities, and underground outlets) from the secondary map you use to travel and fight. The result? Combat can truly happen anywhere, and if you’re looking to grind and level up, you can do so with ease.

Consequently, the map is both useful and tiresome. In spite of having items that ward enemies away, and being able to run away, there are still moments where constant combat is unavoidable. As such, it can be incredibly frustrating to progress, as there are few save points available – particularly in the city.

The combat of Tales of Vesperia is its greatest weakness, being far too clunky and unresponsive to be enjoyable – no matter whether playing docked or in handheld. You’re constantly at the mercy of poor movement input detection, and even worse, the most useful combat mechanics remain inaccessible for far too long. When finally granted access to enhanced abilities, you are left questioning whether the game was punishing you for no reason.

Despite how dated some aspects of Tales of Vesperia are, the characters are anything but, with the game touching upon several social issues that are still enlightening and relevant today. Yuri cannot turn a blind eye to injustice. Estelle struggles to balance between the law and what’s right. Karol tries to value his worth as a person. Fleshed out and enjoyable, these characters create a tale as gripping and inviting as RPG legends like Dragon Age and Mass Effect.

Despite all this, what ultimately makes Tales of Vesperia such a delight to revisit – or even play for the first time – is its overall gameplay experience. Its art, characters, music, and even its take-it-or-leave-it combat create a world that is hard to not to get lost in, nor feel anything but affection for.

For old-time fans, it’s a step back into the world they so dearly loved. For newcomers, it’s a JRPG that, despite some dated mechanics with its combat and gameplay, is still worthy of your time and fits in nicely alongside games like Xenoblade Chronicles and Octopath Traveler, even in 2019.

Tales of Vesperia still holds up as a game that is absolutely charming and enjoyable to play, with a multi-faceted cast of characters and a story of intrigue. It’s a JRPG that deserves your attention, even despite its tangible flaws.