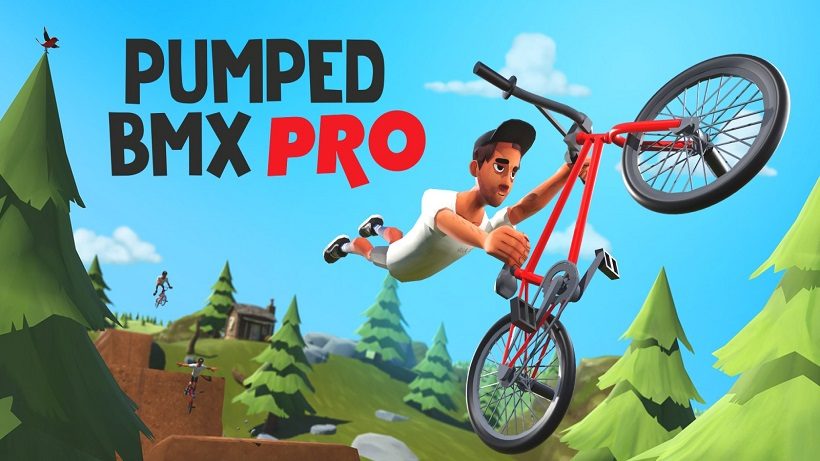 The Switch is increasingly accommodating side-on two-wheel trick-based games, with Pumped BMX Pro the latest example. Also available on PC and other formats, the game’s arrival on Switch  feels like a meaningful transition.

At first, for the uninitiated, the “Pumped” of the title turns out to refer to the core mechanic of the game. At its most basic, the objective is simply to get your BMX rider (and their wheels) to the end of the stage. However, unlike in the likes of Trials, you don’t have an engine helping you out, nor do you get any assistance from peddling. No, the trick here is that it’s all about keeping your bicycle “pumped” which basically means your forward momentum necessary to keep going. This is maintained by pressing the A button but is also greatly impacted by how you approach the multiple jumps in a level.

When launching off a jump, regardless of if you are pulling off a trick, you release A whilst you get some air, before timing the moment to press A again to gain additional momentum for when you land. This is essential as if you make a poor landing, you’ll likely lose too much speed and prevent yourself from being able to make it across the next jump.

Being able to make it to the end of a level may be the end goal, but you must do a lot more to progress through the game and unlock new areas. Each level, the player is handed specific individual challenges like pulling off a particular trick successfully, nailing a combo of two tricks or performing a certain number of move types. There are four challenges to each level, and whilst you won’t need to complete each one to move forward, it is best to complete as many as you can. Unfortunately, it isn’t immediately obvious how many more challenges you need to complete to unlock the next area, which soon results in the tackling of challenges feeling like a grind.

Pulling off tricks isn’t just for the sake of completing challenges, as they also contribute to an overall trick score for a level and can provide for immense satisfaction during your efforts to maintain enough momentum to make it to the end. This provides the true source of fun to be had with this game, it’s just a shame that score doesn’t contribute to overall progression.

Pumped BMX Pro is a somewhat straightforward game; the graphics are simple but pleasing regardless of whether you’re in docked or handheld mode, though some additional background music would’ve helped. The controls are fair and feel part of the challenge (and are easier with a Pro Controller) but tying the progression to challenges does hinder the experience, making it harder to persevere than is really necessary.

Pumped BMX Pro can be an enjoyable experience given its pick-up and play nature and instant restarts. But the difficulty of the challenge soon ramps up seemingly to stand in for a lack of other ideas.