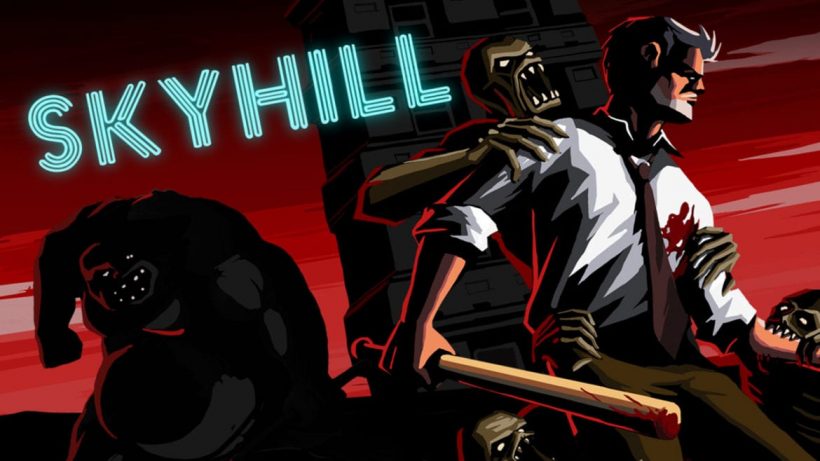 Welcome to hotel SKYHILL, where the room service is poor due to a mutant outbreak caused by a biological weapon. Luckily, you are in the VIP suite, which is equipped with a biological weapon defence system, allowing you to survive the attack.

Unluckily, when you start to get hungry, you must venture forth in the hope of finding food and escaping the hotel. Making things more difficult is the fact that the elevators have malfunctioned, and the VIP suite is on the 100th floor. Looks like you’re taking the stairs.

SKYHILL is a rogue-like RPG experience, involving levelling up, crafting meals from whatever you can find to satisfy your hunger, and acquiring new weapons and healing items to use to survive. Death spells the end of your run, and reshuffles the hotel as the floors are procedurally generated. As you progress, you can unlock various perks to use in future runs. You don’t have to use those perks, however, which allows you some freedom in how difficult you would like your run to be, in addition to customising your experience via the actual difficulty settings.

Battles are carried out in a turn-based fashion, having you select where you would like to attack the enemy. The more damage you’re expected to inflict, the less chance you have of landing the blow, which can feel frustrating and unrewarding due to its luck-based nature. Killing an enemy nets you some experience points, allowing you to eventually level up. You then get four points to spend in a number of different categories to make you more effective in combat.

SKYHILL undeniably relies too much on randomisation, with some runs feeling unfair due to the way the rooms and loot were generated. When you run into a mutant in a stairwell with no weapon, you will curse the RNG gods, especially when those 90% hits miss all too often. Another oddity is its lack of touch-screen support; despite originating on the PC from a mouse driven point-and-click style control scheme, there is no replication of this on the Switch, which is disappointing.

Things get a little cramped in handheld mode, making the small interactive icons hard to distinguish, so docked is the desirable way to play. Thankfully things run smoothly, and the games comic book aesthetic is quite pleasant, even if the environments get rather repetitive.

Due to poor luck, the initial impression SKYHILL left was quite poor. Persisting through those first dozen or so runs, though, helps to get you into a groove, and eventually conquer the mighty 100-floor monstrosity of the hotel.

Though the ending I got was a bad one – as there happens to be multiple ways the game can end – the feeling of “beating” SKYHILL once is enough of a hook to play again, and makes the experience one I’d recommend.

The thrill of conquering a rogue-like is found here in SKYHILL. It does rely on luck and randomisation a little too heavily, but it will still leave you saying “just one more run” before too long.