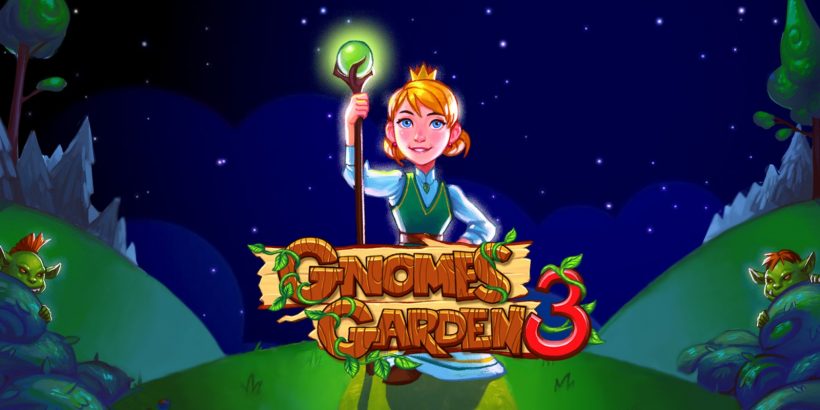 With the gnomes having frantically dashed around stage upon stage in two games before, Gnomes Garden 3: The Thief of Castles takes the gnomes on yet another adventure of crafting food, wood, stone and more in order to build a series of mini-villages.

The third game in the series released on the Switch shortly after the first, with the second game following later still, for some reason. But if you’ve played the first only, you’ll know exactly what to expect, as the amendments to the gameplay are minimal if any. Still, your goal is to tick off each of the objectives presented at the foot of the screen, and still, you’ll do this by setting up mills, quarries, mines and other resource-generating facilities, before upgrading them to have them produce the goods faster.

The tactics of the game come in the order in which you choose to do things. Starting with a limited number of resources, you might want to use these resources to chop wood or chip away rocks in order to open up new paths around the level, or alternatively you might want to establish or upgrade the already-existing facilities to produce extra resources on a grander scale. There is a wrong choice as far as this goes in many cases, as you can find yourself having used up all the wood and yet be unable to progress further as  building the bridge to the next area or filling in the swamp which blocks your way will require wood resources in order to perform. If that’s a predicament you find yourself in, the only way of fixing it is to restart the level from the beginning.

The game is split into four ‘worlds’, but these do the bare minimum in terms of varying up the gameplay. New objects, obstacles and resources gradually appear as you make it through the opening levels, but the remainder spends its time remixing the existing formula rather than adding new elements to the mix. In fact, the only additions to the formula which didn’t ring any bells from the first game were that the gremlins which bumped into the gnomes and stalled their progress in the first game are now usable resources to speed up item production. They’ve been replaced by different looking gremlins which pick up items you haven’t commanded the gnomes to collect, and run away if you don’t catch them in time with an available fireman.

They present the only real obstacle to making your way through Gnomes Garden 3 – it’s by no means a very difficult game. You’ll take a few hours to plough through the campaign, but you should never become too stuck, and in cases where you do struggle, the solution is often to start over and simply adjust the order in which you perform actions.

Arguably the most tricky bit of Gnomes Garden 3 is the requirement to complete a level in a short enough time in order to secure a three-star rating. You have three assists for this – one speeds up the gnomes as they run around the level, another speeds their building and demolition of roadblocks, and the third simply stops the clock for a short time.

Despite not much having changed from the first game, Gnomes Garden 3 is still very addictive stuff. It’s difficult to only play one or two levels in one sitting, as you’re into the thick of the action from the off. It’s worth trying out if you enjoyed the first one.

There’s not much new to see here if you played the first game, but Gnomes Garden 3 is certainly fun, and comes at a budget price. It’s worth a look.