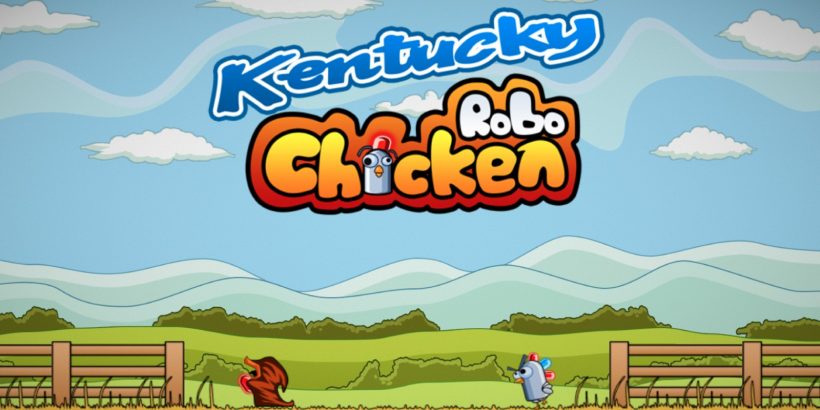 Kentucky Robo Chicken is quite the experience. This one is a mobile game that has been ported to the Switch, and it very much feels as such. The story here is minimal, with our hero, a robotic chicken, spying a lustrous red light globe, only to have it snatched away by a hooded menace. Desperate for that hallowed object, the chicken begins chase.

In this simplistic platformer, much as is the case with most mobile-style games, the narrative was never going to be the focus, but rather an excuse to engage with players enough in order to implore them to persist with the game. This example could have used a little more story, however – a more clear explanation of the reasoning behind the game’s collectibles wouldn’t have gone amiss.

The gameplay is a simple 2D side-scrolling platformer, where you must reach the end goal of each stage within a time limit in order to move on to the next level. There’s no particular emphasis on exploration – you simply work horizontally from left to right, with no secrets hidden away well above the platforms you can see. Games Super Mario Bros. excelled in this style of gameplay, but that’s not a description that can be adequately used to describe Kentucky Robo Chicken.

Controlling the chicken feels, quite honestly, horrendous. When on the ground, there is a weird momentum that follows you when you move, so you have to let go a little early when you want to stop. Flying controls, which have you flapping and hovering to higher platforms and across gaps, only confuses the control scheme, as the at this stage the directional buttons no longer have a slow-down effect, but instead carry your full momentum until you hit something, land, or press the opposite direction.

This change in the control mechanics when the chicken is on the ground or in the air is pretty annoying stuff, and makes precise platforming a chore. That’s particularly unfortunate, because precise platforming is what the game demands, as you need to collect a certain amount of the gears littered around each stage to proceed. These gears are set in spots that require finesse and a deft touch to reach, resulting in the chicken getting blown apart by a bomb, shot by a cannon or eaten by enemies far too often than is really necessary.

Visually the game does look quite pleasant in the beginning, but reused assets quickly dampen the charm. Things quickly descend into repetitive tedium, which frankly resembles the gameplay adequately. Level designs never feel inspired; enemies are all rather generic, as are the environments they inhabit.

The soundtrack is one that shows promise in the beginning; there’s a fun southern vibe to it, with some modern electronic sounds and record scratches to help offset the more classic musical sounds. Unfortunately, by the 900th time you hear the looped track, you’ll want to wrangle the chicken.

At least the game runs well on Switch. There was no slowdown, with everything moving smoothly, coming in very handy for the precise platforming which is imperative throughout the game. There is nothing worse than a game with already finicky controls having any sort of performance issues, and fortunately that’s one of Kentucky Robo Chicken‘s few plus points.

Kentucky Robo Chicken never reaches its potential. Whether it is the finicky controls, boring visuals, repetitive music, barely-there story, or the repetitive tedium of the gameplay, there is always something holding the game back. At least it runs well on the Switch.