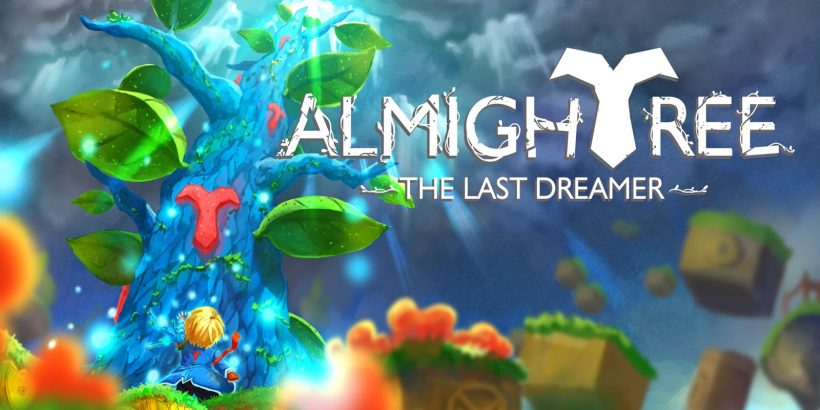 Almightree: The Last Dreamer is a puzzle platform game with a twist.

The world is crumbling around you section by section, and you must race through levels while solving puzzles in order to make it to the Almightree seedling, which is resurrected by your touch.

The levitating world is made up of cubic platforms, which the player has the power to move between positions using a technique called ‘plantsportation’. First, a vacant cubic spot must be selected with the Y button, and then an already-existing block from elsewhere on the stage is also selected with Y to fill in the gap and therefore become a new platform. The puzzling comes in putting these cubes in the right place in order to traverse the level from start to finish – you need to have them in an accessible spot to hop up to, and in a spot where hopping up further is possible either through thinking two steps ahead to existing blocks or by fetching another block from down below.

There is always the impending sense of your own doom due to part of the levels crumbling away into oblivion at regular time periods during gameplay. As such, you can’t stick around and think about your moves for too long – you need to plot and nail the course almost immediately, then hope that you chose correctly from the off, or you might find yourself diddling away your time and ultimately plummeting into the abyss.

Fans of the 3DS Pullblox games will know a similar puzzling experience to that which we find here. But, for some reason, Pullblox seems to offer a bunch more personality. Perhaps it comes in the charm of its simplicity; Almightree adds new elements to the formula throughout the experience, with thorny plants blocking your way and certain special blocks making these plants disappear when placed in close proximity. Elsewhere, metal blocks can’t be moved at all (though these make little if any difference to the challenge of the game, as there’s always an alternative standard block to be used), and some flowers are electrified, shocking you into stasis if you tread on them at the wrong time and whittling down your clock before the floor falls away. But, perhaps due to having an earlier release, Pullblox seemed to be the one to carry the memorability, despite having comparatively more similar levels throughout its games.

Challenges, which involve collecting orbs dotted about the level, only become available once you’ve beaten a level on hard mode, so there’s at least a little emphasis on replaying the levels once you’ve ploughed all twenty of them for the first time. But the multiplayer and online modes present in other versions of the game are inexplicably absent here. As a result, it’s impossible to give this Switch edition of Almightree a generous helping of praise.

Almightree is a game based on a neat premise, but its short timescale and lack of a real sense of personality work against it. After an intro to the game which seeks to establish a story around the importance of the Almightree you must reach to complete every level, the story is never built upon from that point forward, and sadly the overall feel is that you’re then working your way through twenty rather soulless levels. The concept is unique, but the delivery is not as great, and as such this is a pretty forgettable experience.

Almightree has its one clever idea which forms the basis of its twenty levels. But this game isn’t worth anywhere near the £19.99 eShop price.