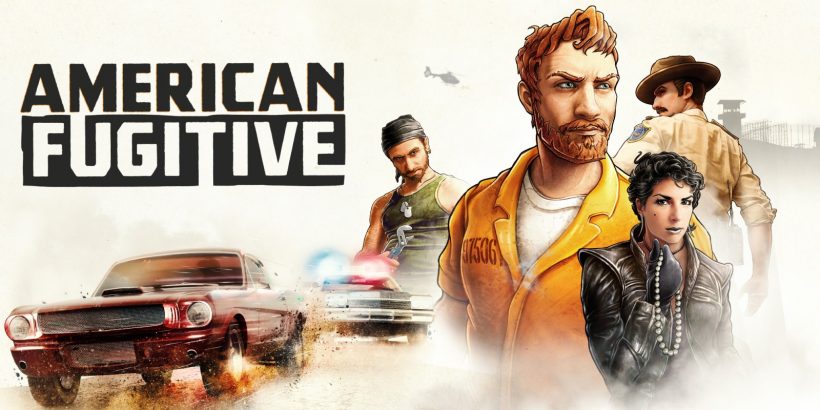 American Fugitive, from Curve Digital and Fallen Tree Games, has you play as fugitive Will Riley, who finds himself on the run after a laughably easy escape from prison. Framed for the murder of his own father, Will soon finds himself mixed up in mess the size of Redrock County as he bids to prove his innocence.

Clearly inspired by the original, top-down Grand Theft Auto titles, after escaping through a sewer pipe, Will starts to acquaint himself with various folks around the city and he attempts to redeem himself from a miscarriage of justice. The story itself is quite basic, driven through a variety of missions, and in order for you to drive the narrative forward, you’ll need to undertake the aforementioned quests from characters on the proviso that they’ll explain more the more you help them. 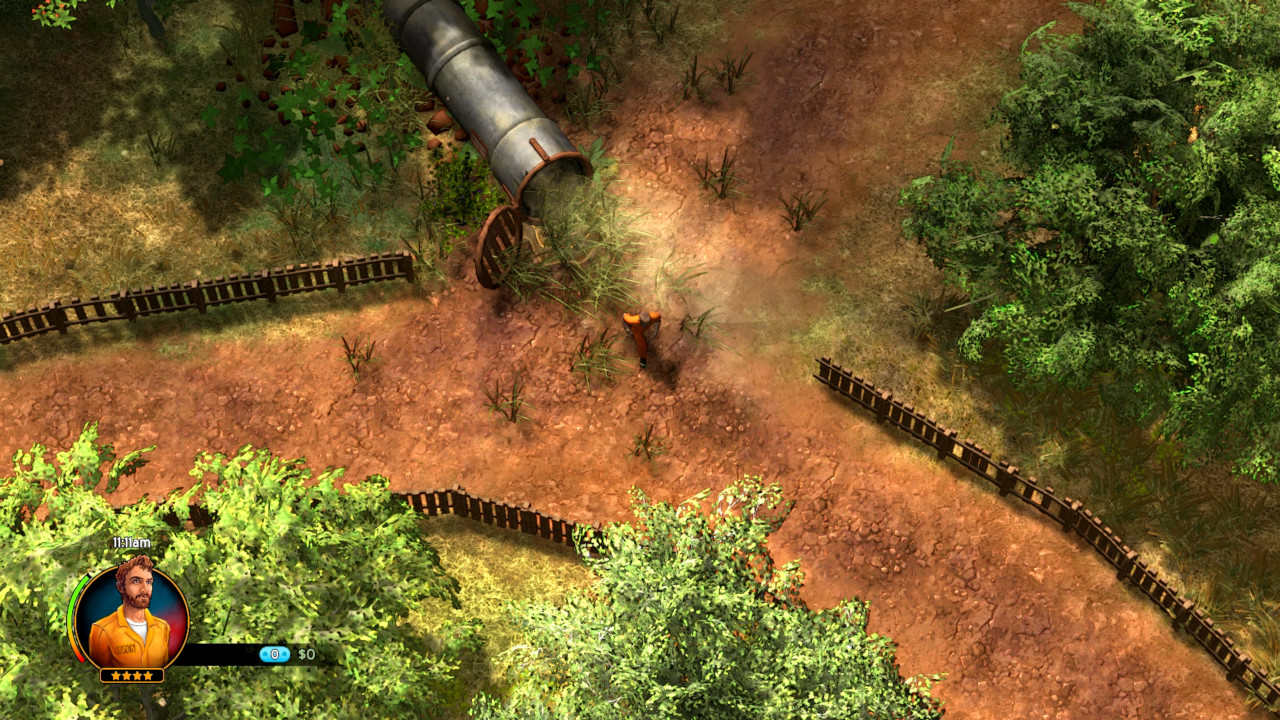 In a similar vein to GTA, missions are accessed by meeting certain characters within the world, and follow the usual sort of commands: go here, steal this, rob that. Some missions need you to “hold-up” a joint, whereas others throw in an element of combat and threat; but aside from that there’s not really ever any real sense of danger. Death (or failure) usually allows you to restart the mission, and should you get arrested, you’ll re-spawn at a sewage pipe, sans all of your gear. You will, however, keep your cash and upgrades.

Ah, yes, upgrades. Your rewards for completing missions varies from bags of cash to stat points, and these points can be used to improve certain elements of your character. Want to carry more gear? Run for longer? Improve your chances of intimidating businesses or people in their homes. It’s quite an interesting addition to the game, and I quite liked to freedom involved for you to customise your character somewhat to your play style. 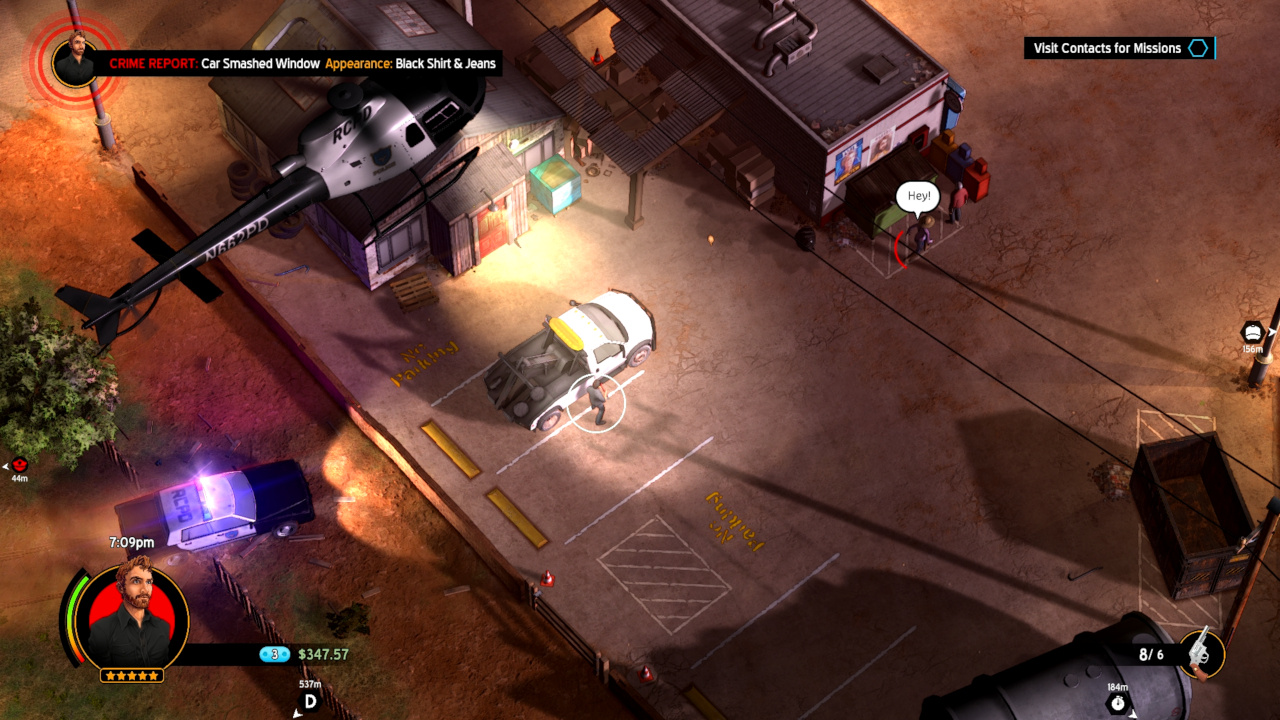 American Fugitive‘s world itself is rather well presented. The top-down aesthetic works very well and carries far more charm and detail that the original GTA titles ever did. The music is eerie and atmospheric and suitably fits the style perfectly. The same cannot be said for the performance, however, as frame-rate issues can take a hit – especially undocked. At various points it was struggling, although to be fair there is an awful lot going on – there’s a huge amount of destructive potential here. Also hidden within the game are a variety of paintings and stashes for you to find (and sell), as well as a variety of vehicles to commandeer; and a plethora of jumps to drive them over.

The two biggest issues with American Fugitive, however, lie with the missions themselves and the game’s AI. The missions, simply, just aren’t any fun. Things get very monotonous very quickly and a lack of any real variety in the missions make for a very repetitive experience. You wouldn’t mind so much if it was fun; after all, that’s what made the GTA series so exhilarating. Even if you embrace the criminal nature of the game, the police can easily be outwitted: not once was I arrested through normal means. Even a fabled 5-star rating, with choppers and SWAT teams on your tail, can be evaded with ease. 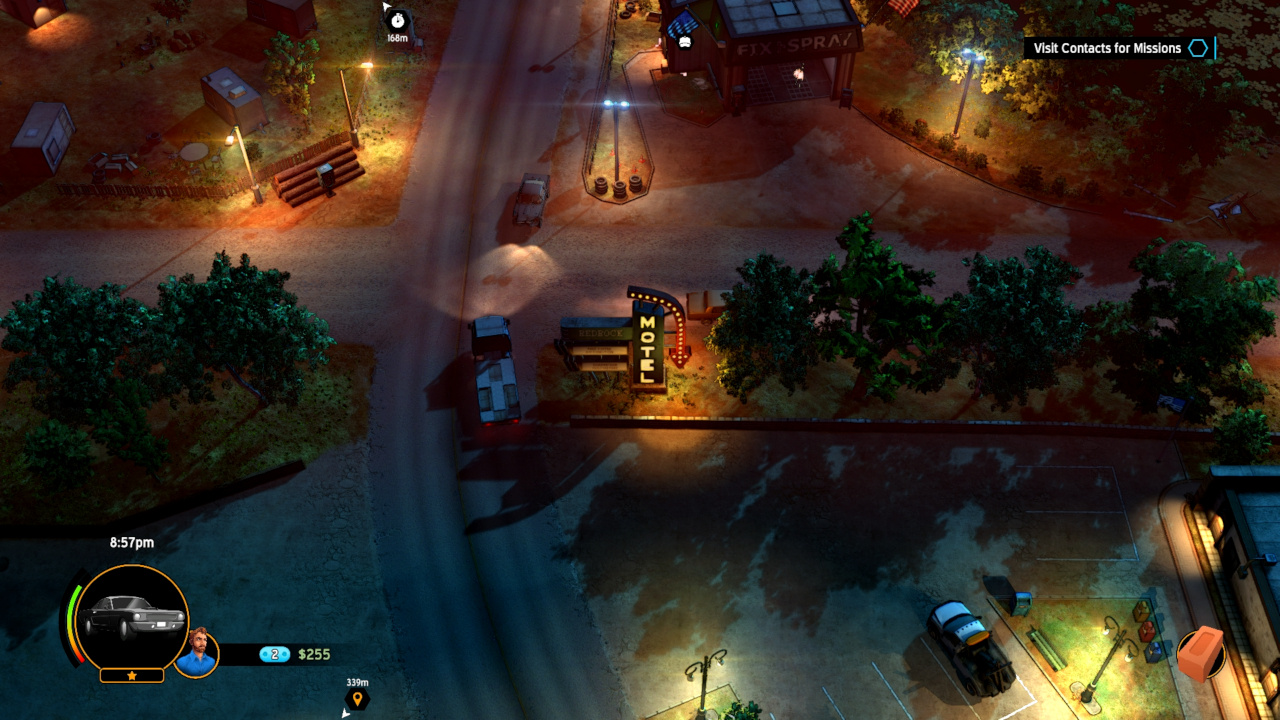 This lack of a fun challenge ultimately robs American Fugitive of the experience it could have been. That’s a massive shame, because what essentially should be an interesting homage and reimagining of a classic and well-loved series ultimately turns out to be a pretty, if annoyingly boring, fetch quest.

American Fugitive is plagued by poor controls, runs inconsistently and suffers frequent and annoying game crashes. Throw in awful loading times, and you’ve got some big issues. It could have been a GTA clone; it’s just a shame that it’s not fun.