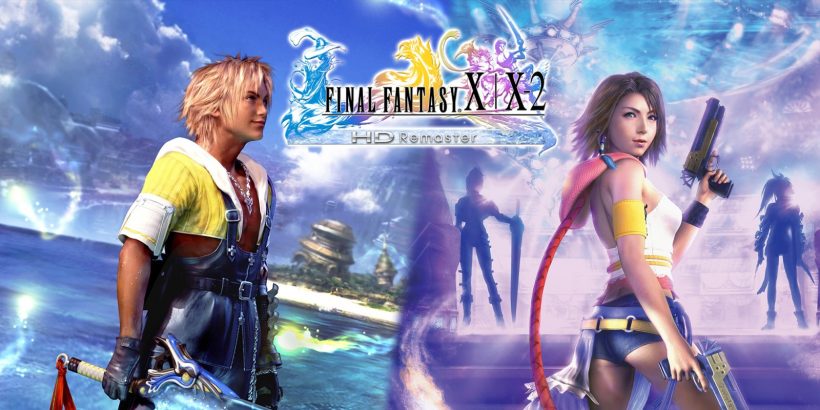 Although Final Fantasy spin-offs have appeared on Nintendo platforms in intervening years, it’s only now that the mainline series is finally making its way back to where it all began way back on the NES. Final Fantasy X is arguably one of the most beloved entries, a watershed for the series giving voice to its cast that had previously relied on just its iconic blue text boxes. The HD Remaster contains both X and X-2 and shows that after all these years, it’s still a stunning and emotional experience that feels right at home on Switch. 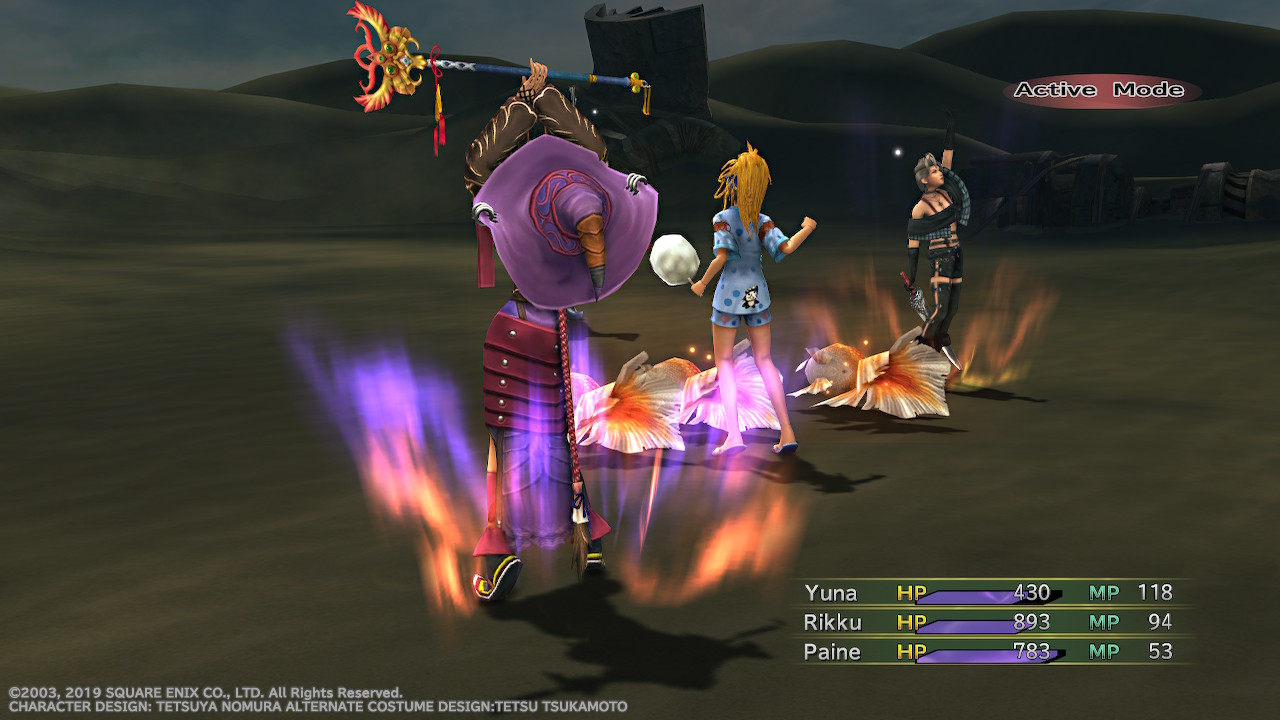 The reason X is so fondly remembered is undoubtedly the relationship between star Blitzball player Tidus and Summoner Yuna. More than just embarking on a fateful pilgrimage to defeat the invincible entity called Sin (just by the name you can expect there are plenty of religious overtones), their story blossoms into one of gaming’s greatest on-screen romances, this despite some at times ropey voice-acting. While the overall cast is not nearly as grating as I remember it, the flat delivery and awkward pace of Yuna’s lines still stick out (possibly owing to the challenge of getting the English script to match the lip sync made for Japanese voices), while Tidus often falls short of the mark when he’s supposed to hit an emotional range that’s not just being a goofy jock who can make a girl laugh – the less said about that laughing scene, the better.

Because ultimately, X is heavy on emotion, particularly when it comes to doom and melancholy – death and destruction is commonplace in Spira while its people fear technology – so it’s hard not to feel like it’s a little undone by some surfer dude who strolled in from a fish-out-of-water comedy.

At least it still holds up visually, certainly more so than the entries before it. X is an especially sweeping tale told with even more cinematic flourish, evident in the frequent and seamless use of pre-rendered cinematics all suitably upscaled to full HD – which explains how an old game still manages to have one of the largest file sizes for the Switch to date.

This is still nonetheless a Final Fantasy game, meaning there’s plenty of party-based turn-based random battles to get through. There is however an attempt to change things up in X, first in the battle system, which replaces the Active Time Battle system in previous entries, which allows you to switch characters in and out of your party while speed can also mean some characters can take more turns than another. This is particularly handy as battles often require you to switch up tactics like Lulu’s range of black magic spells or you might need Wakka’s ball-throwing attack to hit those annoying airborne enemies that are out of reach for Auron’s blade, which should also mean you don’t lean on just a few core characters only to find the rest of your party woefully under-levelled later. 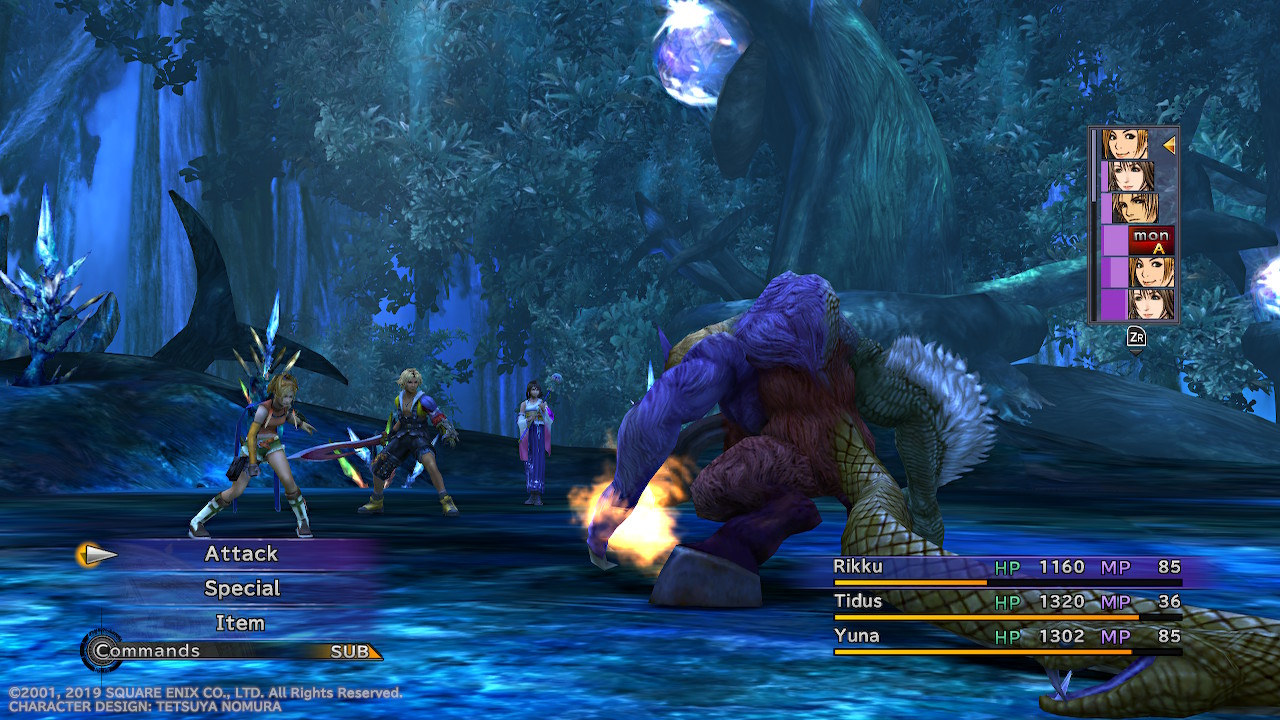 More interesting is that traditional levelling has been done away with. Instead, you have a more proactive approach to building up your character stats on a Sphere Grid by moving along and activating nodes on a board based on the spheres you unlock from successfully completing battles, with opportunities to branch out to other skill paths.

These innovations aside, it’s nonetheless a shame to find that, even if you do get swept up in it, X’s tale is a very linear one. Sometimes it barely even hides this, such as a section that sees your party travel along a high road, which really is just one long straight line filled with random encounters. When you’re not fighting random battles, the other mechanics aren’t particularly enticing either, including the tedious Cloister of Trials puzzles at the temples you frequent. If you can get your head around its ruleset, there’s nonetheless something to enjoy from playing Blitzball, while you can also try to recruit new players from around Spira.

In contrast, X-2 – the first time an entry in the Final Fantasy series has had a direct sequel – is a breath of fresh air. Set two years after the events of X, you could compare it to the way Majora’s Mask was a direct sequel to Ocarina of Time: it may reuse assets, characters and locations, but it couldn’t be a more different game in just about every way.

Controlling an all-female party for the first time in the series, Yuna, Rikku and newcomer Paine are the Gullwings, an unabashed Charlie’s Angels throwback journeying around the world in search of Spheres, special devices that contain secret recordings from ages past, but also dresses. In truth, having each character being able to change into a different dress to gain new abilities in battle is just a more glamorous version of the long-established jobs system, but it’s undoubtedly fun especially when each character’s dress has their own uniquely tailored designs.

So even though it initially looks like Yuna has ditched her summoner’s staff for Lara Croft-inspired dual pistols (and hotpants), she and the trio actually have a vast wardrobe to pick from, from the classic mage or thief classes to some more bizarre ones like the Festivalist dressphere that has each girl kitted out in a yutaka and weaponizing Japanese festival tropes like fireworks and bags of goldfish (no, really). It’s not all cosmetic either as changing dresspheres also change your stats, including HP and MP, so it’s not all tied to levelling up, though you’ll still want to grind out battles in order to unlock more abilities in each dressphere. 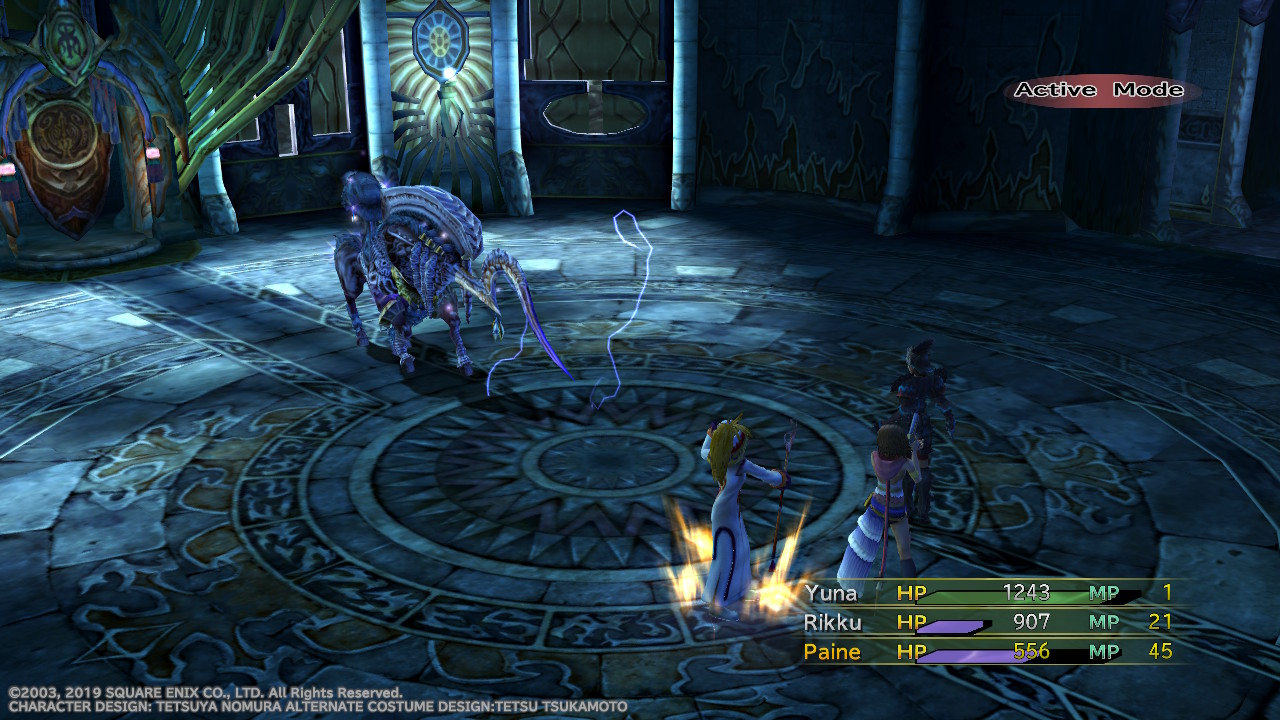 But whether you like it or not, expect to fight a lot of random battles, because oh lordy, the encounter rate in X-2 is madly off the charts – sometimes we’re talking barely five seconds after you fought the last one. If you’re on a particularly tangled dungeon path, this can get annoying disorientating when you forget which way you’re supposed to be heading.

At least the battles themselves make for an interesting change of pace to X’s, with a return to the classic Active Time Battle but with a couple of remixes, such as the ability to chain attacks, while you can still switch tactics on the fly by swapping dresses, which comes with their own suitably fancy transformation sequences.

More importantly, where X’s story was both too dour and linear, X-2 revels in its silliness and early 00s girl power sensibilities, while having a swanky airship from the off means you’re free to waltz around any part of Spira when and as you like it, making for a much more non-linear albeit mission-based narrative. The voice-acting is also much improved, although it might also be because anything that might have felt cringe doesn’t stick out as much when the overall tone is so high on the camp factor. Some might dismiss X-2 as being too light-hearted, and akin to letting someone’s fan-fic have licence to go crazy, but it ultimately works in its favour, and is something of a trailblazer when you consider how many modern JRPGs frequently indulge in fanservice with its anime waifus and J-pop references.

If there’s one thing sorely missing from this package, it’s the lack of auto-saving, meaning if you skipped your last available save sphere and then braved on for another hour only to suddenly get wiped out by an unexpected foe, then it’s Game Over and you’re booted back to the title screen, your progress all gone. Meanwhile, if you’d been taking for granted the cheats introduced in the recent ports of FFVII and FFIX that let you speed up the game, cut random battles or let you deal max damage, no such conveniences exist here if you just want to experience the story on its own. Also compared with more modern JRPG releases today, it’s ultimately a shame there’s no option to have Japanese voices instead, even as a downloadable extra.

Final Fantasy X | X-2 is both beautiful and bonkers, a beloved turning point for one of the greatest JRPG series in video games. Even with its notable shortcomings, it’s hard not to get swept up by its powerful emotions, while there’s plenty for the most ardent JRPG completionists to spend over 100 hours in Spira.