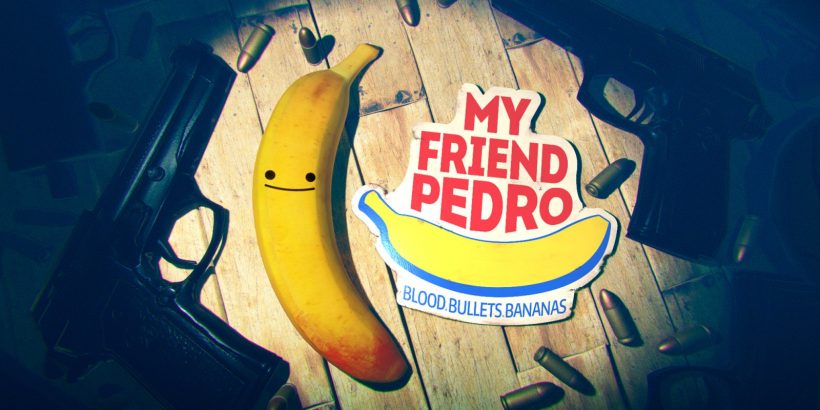 Most indie titles come and go to little fanfare. The ones that do generate a slight buzz tend to dissipate mere weeks after release. Then, as is the way of the gaming ecosphere, there are the ones that have that staying power: Stardew Valley, Celeste, and Cuphead, for example. Each of the aforementioned titles has something intrinsically special about them, giving them this near-legendary status in the eShop category, but the criteria that would deliver such a positive reception greatly varies between all three. My Friend Pedro, a title that made waves from the moment footage was first unveiled on Twitter, is one that seeks to compete in its finished package.

Well, quite easily, apparently. The character that emanates from such a title is palpable and, whilst gameplay is certainly the star of the show, the bizarre world you find yourself in does little to dampen any enjoyment, despite the deliberate daftness found throughout. All story beats, as inconsequential as they seem – when strictly viewed as a narrative tool, at least – add to the seemingly drug-endured hysteria that you’d expect from such an adventure.

Being woken by a floating, ethereal banana is most definitely a unique opening, and developer DeadToast Entertainment appear to revel in the apparent absurdity. Opening with such a setting affords them creative liberties that would usually feel far too ludicrous, but instead feel right at home. Considering that Devolver Digital is publishing the title it’s really to be expected, with the error being on our part if we expected anything less.

The sublime moment-to-moment gameplay also revels in the freedom that the narrative boastfully affords. In motion, it’s as if the Wachowskis’ ‘Matrix’ made messy love to all kinds of parkour and, naturally, threw in John Wick’s affinity for over the top gunplay just to sweeten the deal. A beautiful ballet of bullets and blood ensues, never once letting up letting enough for you to relax, and when environmental factors are thrown into the mix, DeadToast both purposely and effortlessly turn the oh-so-elicit ‘cool’ factor to 11.

The ability to enable slow motion at any point and the ability to flip, shoot and kick – both objects and your many enemies – make things only more dramatic but, importantly, easier. On more than one occasion while playing I got confused about the button placement. However, in a game that is occasionally difficult, the added stress certainly highlights any inefficiencies in button layout. Whilst a minor gripe in an otherwise mechanically-sound game, it’s surely going to aggravate on the odd occasion.

Still, the gratuitous celebration that each combative scenario ignites deep within yourself is the driving force of the game, despite the execution not always being the cleanest. Within the first few minutes, you notice that the traversal animations aren’t the smoothest and, for the sake of smoothing out the gameplay, some liberties are taken to ensure you land on your feet, despite your head being inches away from the ground mere moments before. The parkour was never going to be perfect, especially so considering the flexibility that the game provides, yet it never manages to detract from the overall experience. Instead, oddly, it further contributes to the unorthodox character of My Friend Pedro, seemingly the perfect showcase of the type of game where if the gameplay is masterfully executed, all other issues fall by the wayside.

The game’s sound design isn’t going to be something which sticks with you, but praise should be given for the various, satisfying noises heard throughout. Each gun fires with an appropriate punch, further emphasised when in slow motion, and the recognisable sound of a knife entering a torso (not something I ever thought I’d write – thanks, modern media) feels all the more satisfying because of, again, the gameplay. The soundtrack doesn’t manage to live up to the same lofty levels of the individual effects, however, with a generic action-esque backing playing throughout.

My Friend Pedro Does little to retain your attention once the credits roll, which seemingly forces an end to all the carnage. Playing through the campaign again would seem redundant, with little that you might miss the first time around. With the player left wanting more – not because of the brevity of the campaign, but instead again due to the stellar mechanics – it begs the question whether post-launch content will be introduced, possibly in the form of challenges, campaign modifiers or something else. We don’t know what will happen at the moment, and it will likely depend on the critical and commercial reception, but it most definitely deserves them in this reviewer’s eyes, and I wait for the answer with baited, potassium-infused breath.

My Friend Pedro proves that gameplay is king in a bizarre spectacle of bullets, bananas, and parkour. Whilst other aspects of the game may not be up to the same level of quality as the gameplay, it doesn’t manage to tarnish this otherwise excellent adventure.