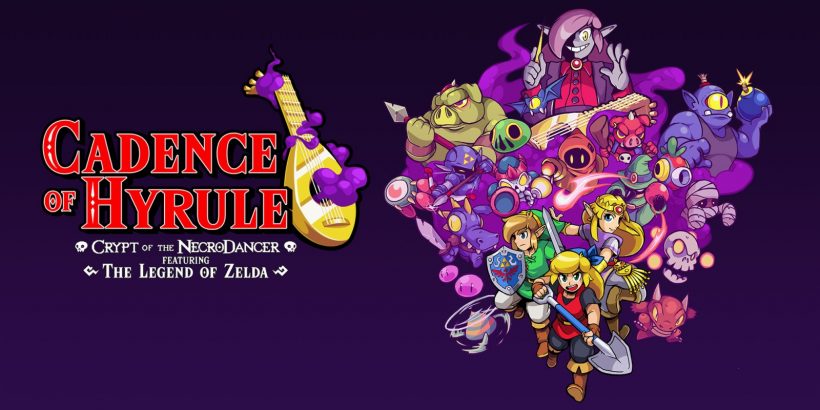 Nintendo is known for being protective over their IPs, with many promising fan-made projects shut down before they could ever see the light of the day. This fact is what made the announcement of Cadence of Hyrule during a Nindies Showcase in March such a shock. Not only was Nintendo letting an indie developer work on Zelda – one of their biggest franchises – but they were also allowing them to adapt the Triforce universe into a wholly different gameplay style. Even more surprising, though, is seeing how incredible this mixture is.

When you consider its full title, Cadence of Hyrule – Crypt of the NecroDancer Featuring The Legend of Zelda could easily be a game with an identity crisis. However, both long-time fans of the Zelda franchise and lovers of the indie sensation Crypt of the NecroDancer are in for a treat. Cadence of Hyrule combines elements from the two franchises in a cohesive, enjoyable way, with the result easily being one of the best Zelda spin-offs.

After a short tutorial where you play as Cadence (the protagonist of Crypt of the NecroDancer), you can choose to begin your adventure in Hyrule as either Link or Zelda. This choice not only impacts your gameplay, as each character has slightly different skills, but it also means starting in a different section of the map (rest assured, though, you’ll unlock the second character later). Resembling a standard 2D Zelda, Cadence of Hyrule features an expansive, fully-explorable overworld.

The difference here is that the entire game is procedurally-generated each playthrough. A new overworld is created for you each time you start a new adventure, with only the placement of certain key segments unchanging. This adds huge replay value to the 6-7 hour-long campaign, especially if you consider replaying the game with a friend via its local co-op mode.

Gameplay-wise, Cadence of Hyrule follows the same rhythm-based formula of Crypt of the NecroDancer. From a top-down perspective, you must walk, attack, and use items, all while following the beats and beeps of the amazing soundtrack of Zelda remixes. Failing in keeping to the rhythm results in a mini-stun, which can be quite problematic in enemy-filled scenarios. Once you get in the flow, though, each screen and dungeon of becomes a bite-sized rhythmic puzzle. Combat becomes progressively more interesting too, because each enemy has its own movement and attack patterns. Mastering them all, and mixing in your newly-acquired items, results in an enjoyable and rewarding gameplay loop.

When it comes to campaign progression, Cadence of Hyrule follows a structure that is similar to a classic Zelda game. As soon as you arrive in Hyrule, you’re free to explore almost the entirety of the map. This can be a bit overwhelming at first, but each screen presents a challenge of its own, with combat, puzzles and secrets to be conquered. Your main objective is to access Hyrule Castle, but in order to do so you must gather items from bosses in four different dungeons. In a very Zelda fashion, each dungeon also demands a certain item or power-up. Exploration is key here, as you can find these goodies everywhere across Hyrule.

Most of the elements from Crypt of the NecroDancer work very well in Cadence of Hyrule. So much so that, upon my first playthrough, I didn’t notice that the overworld was randomly-generated – it seemed like a hand-crafted map. The game even ditched the permadeath system, in favor of a more lenient experience.

However, one little detail that may be a let down for the most hardcore Zelda fans is that certain dungeon sections are also procedural. These are the moments where Cadence of Hyrule looks most like Crypt of the NecroDancer. This isn’t a bad thing, by any means, because these segments are still enjoyable and challenging. However, the result isn’t the same as the expansive, intricate, puzzle-filled dungeons the Zelda series is known for.

Cadence of Hyrule compensates for any possible drawbacks with its outstanding presentation and soundtrack. Thanks to the presence of the same artists that worked in Sonic Mania, the pixel art here shows a big improvement from what’s seen in Crypt of the NecroDancer. Stylishly, it gives some nods to the visuals of pixelated Zelda titles such as The Minish Cap.

Yet, it builds over the Zelda iconography and creates a beautiful version of Hyrule, including the many references that you can expect, with Zoras, Gorons, Lynels and many other well-known figures. The music of Cadence of Hyrule complements it all, with dancing remixes and reinterpretations of the most iconic tracks from the Zelda franchise. The result? Cadence of Hyrule looks and sounds like a loving letter to Zelda.

Cadence of Hyrule – Crypt of the NecroDancer Featuring The Legend of Zelda £22.49

Cadence of Hyrule – Crypt of the NecroDancer Featuring The Legend of Zelda is a game I didn’t know I wanted until I’ve seen it for the first time. By (re)mixing the visuals, soundtrack and structure of a Zelda game with the gameplay from Crypt of the NecroDancer, it creates a unique experience – one that is faithful to the Zelda series at the same time it stands out as a superb spin-off.