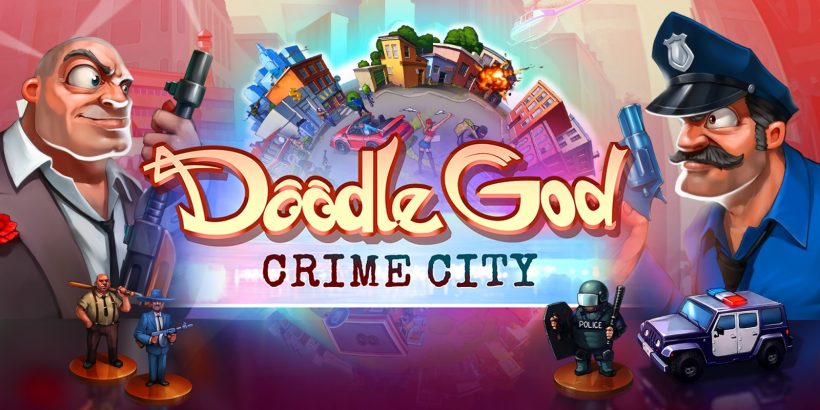 If you’re after a thrilling game of crime, murder and cops and robbers, Doodle God: Crime City might not be the one you have in mind.

While these elements of the criminal underworld are present and correct in this title from JoyBits, Doodle God: Crime City is ridiculously simple on the gameplay front. Presented with two identical sets of items and objects, which you cycle through with the left and right sticks respectively, you must form pairs of items which combine to create new items. Mix the ‘crime’ and ‘person’ items to create a ‘criminal’; ‘criminal’ plus ‘building’ yields the ‘hiding place’, and so on.

Those ones might seem logical enough, but a lot of the other combinations don’t leap out quite as much. ‘Sawdust’ plus ‘water’ equals ‘humus’, for instance; and without simply using a guide to make your way through all of the game’s combinations, that’s  an issue particularly when these combinations appear later on in the game and you have hundreds of different items to experiment with compared to the handful that you start the game with.

If you played Piczle Lines DX on the eShop when that released a while back, you might remember that the way the story mode there was that each time you completed a puzzle, a new item would appear on the art image which formed the overworld hub of sorts tying all of the levels together. Completing all of the levels would be the way to see the completed image and that was the long-term payoff. A similar aspect is at play in Doodle God: Crime City, allowing you to ‘build’ the city from a small, sparse area to one with (static, admittedly) car chases, explosions and mafia dons. But, unlike in Piczle Lines DX, not every single puzzle results in something new being added to the main image, leading to a feeling of unsatisfactory reward for figuring out some of the more arduous combinations.

While it may not be an action-based game, it’s enjoyable enough experience to pull off continuous new combinations here, so long as you don’t find yourself hitting an extended period of being stuck. Such is the scale of the number of combinations available to you, losing your track is only really fixable by following a guide, which is the game’s main issue. Switching to the alphabetised list of items in that situation is advisable for quickly finding items, as the group sets aren’t the most intuitive.

But I do take exception to the game’s description on the Nintendo UK website, which promises that players will “evade the Cops as well as fight off rival games in order to become the “Big Boss” of the City.” This isn’t even close to how the game actually plays. No matter whether you’re playing the City mode, which simply has you creating combinations until you reach all thirty sets of items and all 280-odd individual objects, or the ‘Campaign’ mode, which presents more of the same – except for a shorter duration and with fewer items to burn through – neither mode has any sort of gameplay experience which is anything other than the trial-and-error selection of items from a menu.

Nope, you don’t ‘nab the bad guys or pull off heists to build your fortune’; this game never gets close to that level of exciting. It’s an item-matching game; nothing more, nothing less, so don’t come here looking for thrills and spills.

Doodle God: Crime City is fun when you’re doing well but can get soul-crushing when you can’t figure out the right matches, particularly later on in the game.