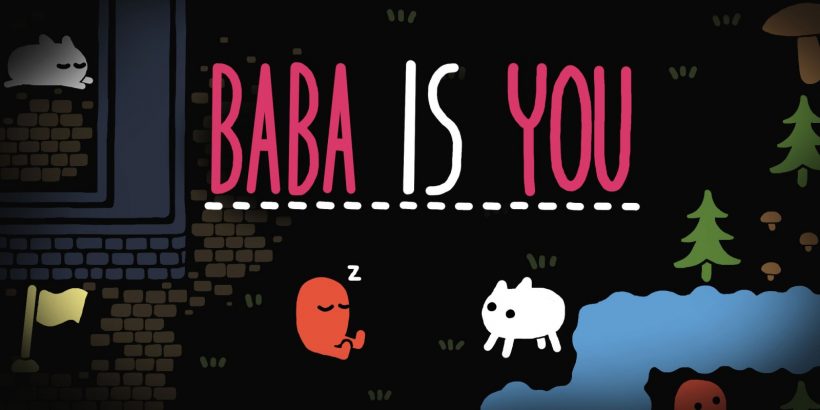 Baba is You is a surreal, indie puzzle game that has you completely changing the mechanics and inner workings of each level in order to proceed.

Every puzzle presents new ways of interacting with the game’s obstacles, and pushing them around the stage dynamically alters the puzzle landscape in order for you to progress. It sounds difficult, but playing it for just five minutes is enough for players to get to grips with the concept. Solving the puzzles themselves, however, is a different matter.

In each level, you feel like you’re picking the very game itself apart, as nothing is quite as you expect. As with all traditional puzzle games, confusion abounds from the off as far as solutions go, but here the challenge comes in the brain neglecting logic and second-guessing itself. Some puzzles are easier than they seem, but due to your prior conditioning from other games on how puzzles should behave, you don’t first consider the wealth of options that you have at your disposal in this game. It’s a fascinating way of creating difficulty.

Speaking of difficulty, Baba is You is certainly a difficult game – but you don’t have to complete every level to finish it. If you end up stuck, you can try a different puzzle or come back when you’ve refreshed yourself, and are ready to give things another try. With over 100 levels available – and as you delve deeper into them, more complicated obstacles such as robots that move alongside you, or even hot water that you will have to manipulate to prevent it from melting you – there’s enough getting in your way to spice the game up.

Baba is You is extremely simplistic in terms of its presentation, though its quirky sound effects and low-fi style are charming and lovable. These aspects ensure that your concentration on the problem-solving of the gameplay is not broken, with the aesthetic most closely matching that of Undertale – a compliment, given that game’s position as a cult indie favourite.

The mechanic of rewinding time via the L and R shoulder buttons similarly seems to take inspiration from indie forefather Braid, while the level selection overworld is reminiscent of Super Mario World. While Baba is You nods to such games, it earns its place in the indie hall of fame on its own merits. The drop-in/drop-out nature of each one-screen puzzle stage makes the game perfect for the Switch’s on-the-go hardware, and there is a lot to be said for the variety of concepts and designs given that this game is the love and labour of a one-man development team.

Overall, in Baba is You, it is important to remember that logical solutions won’t always come to mind – or even be effective. You really have to challenge your brain to think the “right” way, and think in different ways that go outside the theoretical box. It’s a learning curve that can be frustrating at times, but as a puzzler unlike any other you may have experienced, Baba is You is pretty ingenious with its unique puzzle design, and is definitely an indie worth playing.

If your interest in Baba is You has been piqued by this review, you can check out our interview with solo developer Arvi “Hempuli” Teikari in issue 26 of Switch Player Magazine, where he spoke about the game’s origins in 2017 at a Nordic game jam.

Baba Is You is a simple, yet ingenious indie puzzle game that is unlike anything you’ve seen before. The charming and minimalist presentation combines with immense creative difficulty to make something that will blow your mind, if it hasn’t melted it in confusion first.