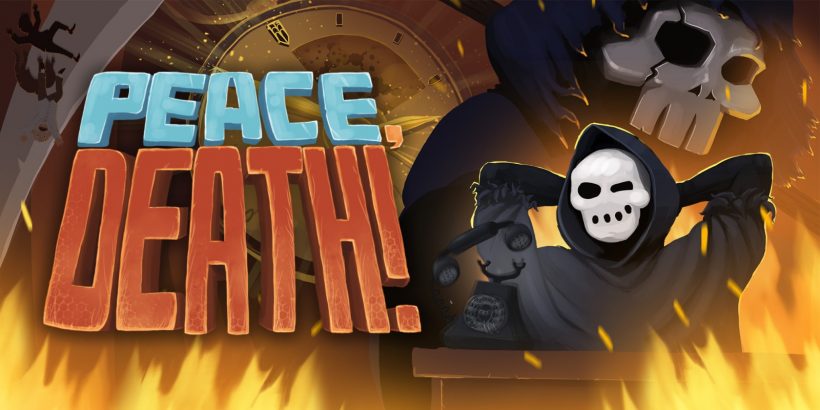 Peace, Death! is simple in premise; you play as the Grim Reaper, and make the decisions on whether the recently deceased are sent to Heaven, Hell or Purgatory. Performing the action of your decision is done with Y, B or A, each assigned to one destination, but the trick comes in the number of factors about each character which must be taken into consideration for you to make the right choice.

Peace, Death! starts out straightforward – the red-skinned, devilish entities are sent right down to Hell, while the human beings board the elevator upwards into Heaven. But then, on a level-by-level basis, things start to become more complicated. Humans, as is in their nature, can be heavily flawed during their lifetime, and you must iron out the one which have committed sins in their time before leaving the mortal coil. Some will arrive with their body covered in blood, meaning they should be sent to Hell as penitence. Others maybe standing on a pool of blood; others will be holding a weapon; all of which result into trips in the Hell elevator.

But the additional factors you need to take into consideration keep on coming. Some will be wearing hats and sunglasses; normal-looking humans may have devil horns to look out for, and these might be cunningly concealed by their headwear. So, in later levels you must first remove all of a characters’ accessories and then make your judgement as to where you’re sending them. Remembering the buttons for each action is where the challenge comes here in such a frantic rush against the clock to get everyone judged correctly.

For what is such a simple idea for a game, the breadth of characteristics to recall is what makes Peace, Death feel like a much deeper title than it ought to. Further considerations include the characters’ eyes – if they shine bright white, they go to Heaven, and red sends them down to Hell. Characters holding food are guilty of gluttony and must go to Hell, and they can be holding the Holy Book (good) or Satanic scripts (bad). And that’s not even the half of it.

Then, of course, Purgatory comes into the mix. If a character drops their weapons, the blood on their bodies or on the floor beneath them washes off, or if they renounce their holy texts, it’s Purgatory for them. Some will refuse to go to Purgatory altogether, meaning they have to go to Hell, and those with eyes in flashing grey are off to the middle ground too. But the game plays tricks on your mind as the numbers of people you must judge increases – you start to forget the things which people have renounced, and end up making simple errors just due to the sheer weight of numbers that you have to process.

The game isn’t entirely judging people based on their physical appearance – the processing system is interspersed with the odd phonecall where you must read information about a person, discard superfluous information and make a judgement simply based on what you’re told. There are also safe-cracking puzzles which seem a little out of place here, but at least offer something a little different.

Peace, Death! won’t win any awards for visuals or music – it’s pretty standard stuff, with pixel graphics and a forgettable backing score. But it does do alright in humour, even if a lot of its text appears on screen for just a split second. It’s a budget Switch eShop game worth checking out.

Peace, Death! Complete Edition is one of the better games you’ll find on the Switch eShop for under a fiver. Moreish, tricky and challenging, it has personality and is worth a shot.