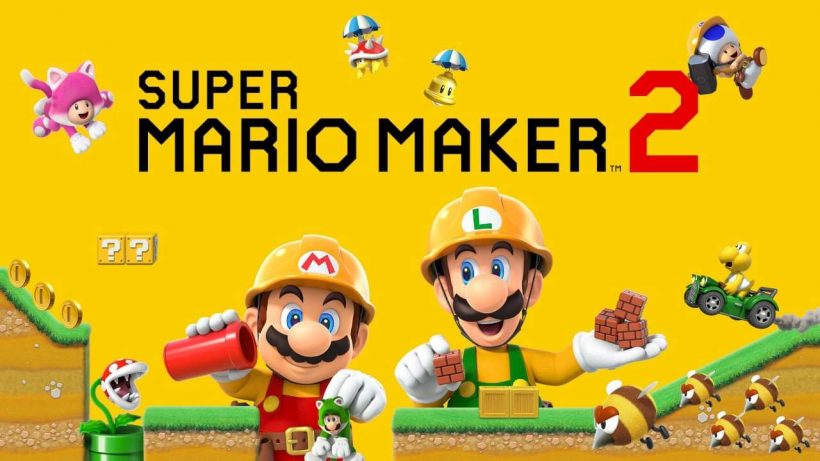 There’s no doubt the Wii U had a troubled life. But if there was any game it had to exist for, Super Mario Maker was it. Nintendo’s DIY Mario game brought a wonderful fresh take to the Mario series we all know and love, creating something unique and joyful. Could the sequel deliver the same magic?

Nintendo’s approach to SMM2 is ‘Mario Maker… but more!’ The core game remains the same, offering four retro styles that can be flipped between on a whim, which are now being bombarded with new enemies and obstacles. Each game style has more stage types, including jungle and desert themes. To add to the range even more, each style and stage has a night mode, adding even more variety to the possibilities. The night mode themselves change the rules of your levels by invoking wacky adjustments such as flipping the screen or changing the gravity. These all depend on the stages that you use, adding a huge amount of creative depth to the game – something that justifies the sequel moniker.

A new welcome addition is a tutorial section that not only teaches you about how to use SMM2’s tools, but also teaches you about good level design. It goes so far beyond the sample stages and companion book of the original that I wouldn’t be surprised if our next generation of game designers cite SMM2 as their first foray into making games. It’s an excellent starting point for budding creators as the design interface itself will take a little getting used to. Due to the raft of additional content, the immediacy of creating levels has been hampered with sub-menus in the item list. SMM’s items were in one place, allowing you to glance at items and just pick and place. The new radial menus now group items into sections, so when you’re just looking for inspiration you suddenly find yourself squinting through the sweet shop window instead of divining into the pick ‘n’ mix of everything on offer.

The absence of the Wii U’s gamepad means that SMM2 needed to implement an alternative interface. The first is using the Switch touchscreen. This is, hands-down, the easiest way to make a level. Using the stylus is almost as good as making stages in the original. Meanwhile, in docked mode you have the advantage of a bigger screen, but have to use the controller to move the cursor and manipulate your courses. This is perfectly serviceable, but despite shortcuts to jump between menus and the radial menus, it simply slows the whole process down. It’s the price we pay for losing the Wii U’s dual-screen feature. On the plus side, it does introduce the co-op building mode – if you and a friend want to build together then grab a Joy-Con each a go wild.

Of course, making levels is only half the game. There’s a platform game here too, and Nintendo have been busy creating a new story mode. In it, you’re tasked with collecting coins to help rebuild Peach’s castle. To do this, you work through a number of pre-designed levels varying wildly in theme and design. The idea is to give the player a fun experience while applying subtle nudges for ideas to create your own Mario masterpieces. This is a replacement of SMM’s sample stages and makes for a fun Mario game in its own right. The only downside is that you can’t use these stages to use as a base for your own levels, as they are completely walled off. The levels themselves are fun and creative, bringing together some really smart ideas and ingenious elements. You don’t need to clear all of these to finish the story mode, but you’ll be robbing yourself of some wonderful, challenging Mario levels if you don’t.

The game doesn’t stop there. SMM2 introduces the “additional game style” from Super Mario 3D World. It’s a clever move to bring in this 3D game style to a 2D format as the original behaves like a 2D Mario game in a 3D space. In the world of Mario making, it opens up a whole new game style as Mario is more acrobatic – partly thanks to the cat suit – and offers a whole set of unique game design elements that aren’t found in other Mario games. This style feels much more dynamic and it really is a joy climbing up walls and pouncing down on enemies while stealing a Koopa Troopa’s car. There are so many possibilities opened to makers in this mode, and it’s exciting to see what people come up with as creations start to appear in the game.

This is also, however, where Super Mario Maker 2 demonstrates that it may be struggling to deliver everything seamlessly. The 3D World style is separate to the core styles. There’s no option to switch between these and 3D World or vice versa – you have to recreate your level from scratch. With no copy and paste between levels or sub-zones, that is far from ideal. It also scratches at a deeper problem in SMM2: a disconnect of styles. This problem also exists when you create a vertical sub-zone. You want to switch from horizontal to vertical? No problem, just, you know, do everything again.

It’s nit-picking, but SMM’s joy in level designing was the seamless interplay between genres and styles. By adding all of these undeniably great additions, Nintendo haven’t quite managed to keep that same child-like innocence. Instead there are mildly annoying roadblocks throughout that mean experimentation and creating are more time consuming and a little less fun. It’s preferable to have these extras than not, but it would have been helpful if there was some better way to manage this.

Discovering levels is much improved within this game. The levels you create and upload are tagged, and players can also tag them how they please. You can search for levels by theme, style and region, which is something that was sorely missing in the original and which should prevent endless “auto-Mario” stages.

In a shock twist, SMM2 introduces 4-player multiplayer. You can play with your buddies just like in the New Super Mario Bros. games on the same screen. Local networking offers co-op and competitive modes. There’s even the ability to play stages online, a huge milestone for any Mario game; but alas, in true Nintendo form, it isn’t quite what you expect. As of right now there is no way to play with friends online – it’s randoms only. Nintendo have officially said that they’re looking into this, but it is bewildering as to why this was omitted. It may be because there’s also a bizarre need to download the stages before you can play them with friends. It’s a cumbersome setup that just feels like it wasn’t fully thought through.

Let’s not get too bogged down on the negatives though. These are issues born from the fact that SMM2 builds on Mario Maker’s foundation. With so many new modes, tools and themes we have so many new creative directions as a creator and a player. You will have no end of delight in the near unlimited possibilities and challenges that are on offer.

This is a grandiose, yet slightly imperfect follow-up to the Wii U’s darling game. But for SMM2’s faults and a lack of the original’s wackiness, it truly does shine as another great do-it-yourself Mario game. Even if you don’t want to build, the wide-ranging levels soon to be on offer can keep you going for many, many hours.