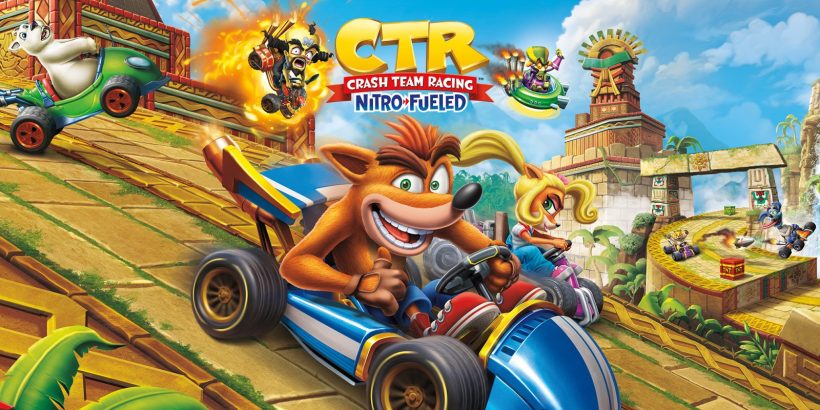 Crash Bandicoot is back on the Nintendo Switch for the second time, swapping out platforming for kart racing in Crash Team Racing Nitro-Fueled, another remaster of a Naughty Dog PlayStation classic.

This time we get the game alongside other versions, rather than having to wait for a port, and while it may have some stiff competition with the likes of Sonic Team Racing and Mario Kart 8 Deluxe available, it offers an experience unique enough that you shouldn’t have to choose between mascots. You hear that, ‘plumber boy’?

CTR might clearly be derivative of Mario Kart, but while the gameplay appears similar on the surface, the nuanced contrasts become apparent once you sink your teeth in. Sure, the ‘Gem Cups’ available later offer a more traditional four-course Grand Prix, but the main single player, much like the original, is if anything more similar to Diddy Kong Racing, offering an over-world hub with a story. Racing against the aptly named Nitros Oxide, anything other than pole position will mean defeat, so like Ricky Bobby said: “if you ain’t first, you’re last”.

For the Mario Kart purist, Crash‘s controls and feel can take a little while to get used to. This is authenticity to a T really, when you consider that the original CTR game was much the same. Developer Beenox have made sure to fine-tune gameplay and mechanics, and features such as the power-slide add an interesting and somewhat strategic dynamic to each course. By executing three successful power-slide boosts in a row, you can really gain that extra bit of speed to get you over the finish line, and pulling it off correctly is instantly gratifying.

CTR’s Switch rendition takes a hit graphically, as expected, but you’re still getting the full experience with no performance issues, aside from a few pesky load times. The HD Rumble also works brilliantly in giving you that satisfying tactical feedback when executing a perfect power-slide, and it’s as if you can feel the engine revving in your hands.

Presentation-wise, the stages have been revamped hugely. From the stained glass windows of Cortex’s castle, to Tiny’s motocross-esque arena, each racetrack embodies the personality of its signature racer to great effect. Whilst the character lineup is nowhere near as memorable or strong as Nintendo’s, references and nods to the different games in the series will keep fans happy, and added flair and vibrancy brought to the levels make them stand out more prominently than ever before. The ‘boss battles’ themselves aren’t particularly enjoyable, but this is one of those catch-22 situations with a remaster, where if you’re bringing the game back, sometimes you have to do it ‘warts-and-all’, and it’s just a section that hasn’t particularly aged well.

Kart customisation is another new aspect to Nitro-Fueled that tailors to its modern sensibilities. By unlocking coins through regular play, you can buy new stickers, karts and characters in the ‘pit-stop’ section: a Fortnite-esque storefront that changes its rotation of items each day. However, be sure to stay connected to the internet while playing, otherwise you won’t earn any coins. This is a strange choice, perhaps to do with the in-built store updating or to track progress, and it can be particularly frustrating with the Switch version if you’re making progress on the go and don’t have access to a strong signal.

The ‘Nitros Oxide Edition’ of the game, available from launch, unlocks the titular villain, alongside some other characters and exclusive goodies. Considering the characters can all be unlocked through normal play, it may not seem worth the additional cost, but it’s there for those who want Oxide unlocked from the start, and again the bonuses are purely cosmetic, so there’s no pay-to-win feeling. DLC planned from day one isn’t something typically that buyers tend to support, but the seasonal content does offer free tracks and extras, and it helps to keep the player-base active long-term.

Much like with the main series Crash games, rolling credits by, *ahem*, ‘racing’ through the single player will only complete around 40% of the game, and with an online pipeline already laid out, there’s plenty of content to get stuck into with this title, whether you decide to spend extra money or not. Creative director Thomas Wilson said in our interview that the main pillars for Nitro-Fueled’s development were “authenticity” and “modernization”, and both seem to have been achieved. Did I mention that there’s even full online multiplayer?

We now have two excellent Crash comeback games available on Switch, and both Vicarious Visions and Beenox have proven they can innovate and get creative with the franchise whilst still staying true to what fans hold nostalgically dear. Is it time for an original sequel? Who knows, but there’s certainly cause for a victory lap.

Crash Team Racing Nitro-Fueled achieves the same highs as the N. Sane Trilogy in its revitalisation of another Naughty Dog classic, and goes one step further by modernising the racer with an online component that has a clear road-ahead. With the same experience as other consoles – aside from some visuals tweaks – and more DLC in the pipeline, it’s a worthy alternative to Mario Kart 8 Deluxe.