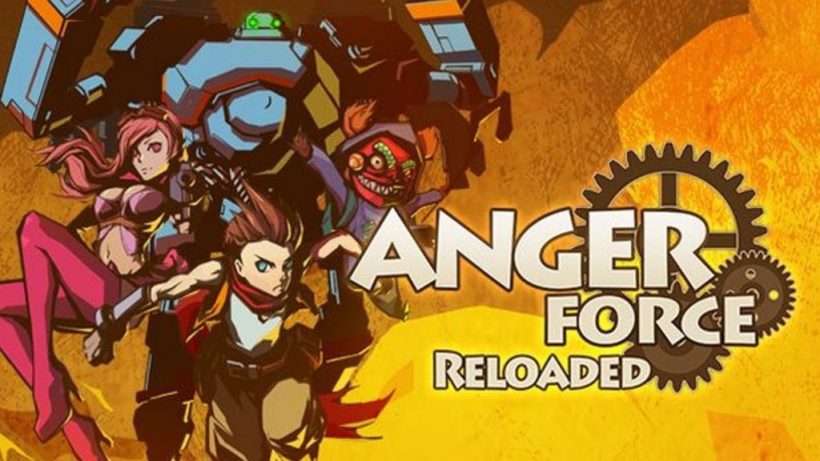 Living in this ‘golden age’ of indies reassures us of a two things. One, that there’ll be an abundance of shoot-em-ups aping the pixelated art style of the 80s arcade era. Two, a large portion of them will struggle to live up to their stylish presentation, despite giving us the expected addictive gameplay.

AngerForce: Reloaded manages to sidestep these potential drawbacks, delivering on both fronts. By being one of the rare vertically-scrolling shooters on the Nintendo Switch to expertly make use of the console’s portrait mode, and play all the better for it, it is easily a title worth trying.

Set in a steampunk world overwhelmed by a robot rebellion, AngerForce tasks you to hold back the onslaught as either Samhill, Echo, Shin or Asimo. Each playable character has their own backstory and reason for wanting to take on the hordes, and while four characters may not sound like a lot, all feature two unique abilities (in addition to dropping bombs and the general act of shooting) that work perfectly in catering to different playstyles.

Samhill, for example, is the most balanced of the four; his attack and health levels are identical which makes him the best all-rounder. While his Fireball ability comes in handy in terms of decimating enemies up ahead, some players may find his Slash ability invaluable when wanting to attack incoming robots up close. Other characters, meanwhile, prioritise health or a widespread shooting radius. All this great gameplay wraps around a gorgeous cartoon aesthetic that merges 2D animation with 3D-like effects. AngerForce hijacks the anime aesthetic and fully runs with it.

Beyond these unique genre spins, the Nintendo Switch version of AngerForce earns its “Reloaded” subtitle – and does more than enough to keep the tried-and-tested shoot-em-up format feeling fresh. The campaign consists of seven diverse stages, each including a handful of bosses (the aptly named Turboghini is a highlight) that almost always have more than one form. It helps keep you on your toes, as you always catch yourself watching for a perfect opening in which to shoot at enemies, while dodging the many frantic bullets and blasts barrelling towards you.

Of course, it’s easy to deem any Nintendo Switch version of a game the best by default purely because you can take it anywhere with you. AngerForce, however, doesn’t disappoint in this regard either, letting you rotate the screen 90 degrees for glorious portrait mode play. Using the button inputs in this way may take some getting used to at first, but it doesn’t take too long until you fall back into AngerForce’s anarchic flow and rhythm – portrait is clearly how the game was meant to be played on the Nintendo Switch.

This souped-up Switch port also features local co-op play, which, while present in other versions, feels just as natural here as it does in any other two-player shoot-em-up. Just be prepared to have two characters rapidly whirring about on the same screen at any time; when breaking off the Joy-Con with a partner, things can quickly get hectic. Oncoming enemies prove to be just as aggressive.

AngerForce: Reloaded serves as a breath of fresh air for the classic genre, being a welcome addition to the Nintendo Switch catalogue that will have you constantly exclaiming, “just one more run!”. Its difficulty might be a little erratic, but this is more than made up for through its charming style and various characters’ unique skillsets.

AngerForce: Reloaded is a challenging but rewarding shoot-em-up that you won’t be able to put down. It stands out as one of the best in its genre on Nintendo Switch.