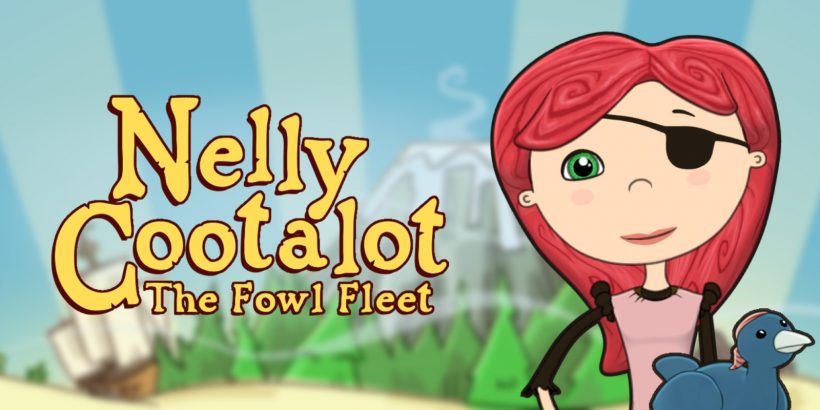 Nelly Cootalot is a self-proclaimed pirate, working a rather glamour-less job aboard a postal ship. To her shock, the ghost of the pirate captain William Bloodbeard appears to scold her for not finding his treasure. Bloodbeard’s evil brother, Baron Widebeard, is bound for the treasure, and Nelly is tasked with stopping him from reaching it. And thus starts Nelly’s adventure, where she will mail herself to an island, fix a race, attempt to stop Widebeard’s evil schemes, and save a bunch of hypnotized fowls.

The story of Nelly Cootalot: The Fowl Fleet is the main focus of the game, with its wide array of weird and wacky characters being the driving force of the narrative. It is a little bonkers, and is laced with a smart humour that will have you chuckling away to yourself on several occasions. One of the main things that helps to bring these characters to life is the extremely strong voice acting, with each actor putting forth a brilliant performance.

Playing the game is quite simple. It is a point-and-click adventure game, and comes with all the highs and lows that genre has to offer. The basic gist of gameplay is exploring an environment where you must solve rudimentary puzzles to progress. Some of these puzzles are clever and use common sense, where others get a bit outlandish, requiring you to either think outside the box, or just randomly click on things until you get the desired outcome.

Most of your actions as the player include inspecting an item, picking it up or using it to interact with a person, another item or a place of interest. Sometimes you will have to combine items before you use them on something, and at other points you will have to order others around to help you solve things, but that is really as hard as it gets. Although mostly simple, there will be some puzzles that will have you tearing your hair out, as the logic seems a bit off, but then that applies to nearly every point-and-click adventure game.

Controlling Nelly Cootalot is easy, thanks to a rather smart control scheme. When docked, you use the left stick to move Nelly around, and flick the right stick to select items to interact with. Thankfully the game doesn’t use the right stick as a mouse pointer, which is a tired trend in this genre; instead you just flick between items within the environment. You also have some basic menu functions, though the execution of the menu system leaves something to be desired.

When playing in handheld mode, all your right-stick motions can be substituted for touch-screen controls. Although this may sound easier, it actually was a bit of a pain. When clicking on an item, instead of just selecting to pick up or interact with it with the touch of a button, tapping it will bring up a mini menu for you to choose what to do, adding an extra step to things and slowing down the pace.

The game is visually stunning, with a great illustrated design which resembles a children’s picture book. Some of the characters will have a pseudo-3D look, but it never impacts negatively on the artstyle as a whole. Things run smoothly on the Switch, with no bugs or nastiness to report, though the load times when changing areas can be a bit long, which can make certain puzzles a chore.

Though it doesn’t break the mold of point-and-click adventure games, and falls into some of the genres trappings, Nelly Cootalot does encapsulate what makes them so fun to play. Fun and entertaining characters really bring the story to life, and the voice acting is superb.