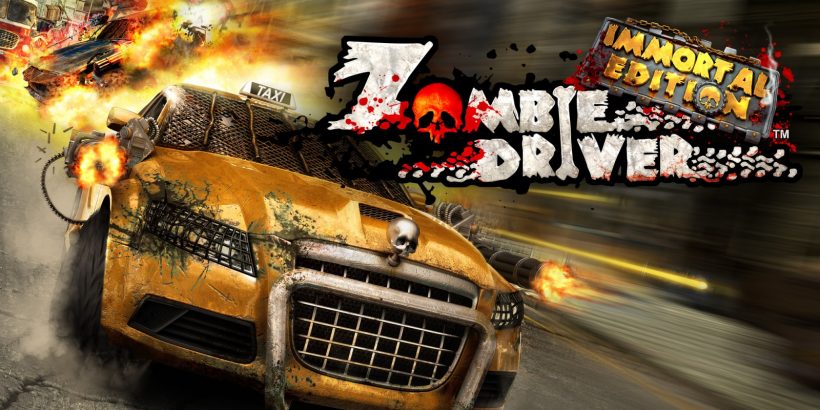 Other than sounding like a phrase that would work wonders for SEO, Zombie Driver is a game title on a level of blandness that really doesn’t do this anarchic, vehicular-based zombie kill-a-thon any justice. To be fair, it did originally release in 2009 – a time when there wasn’t a constant assault of indies launching each week, Xbox Live Arcade doubled up as a great curator, and games didn’t have to work so hard to be seen. Now available on Nintendo Switch as Zombie Driver: Immortal Edition, this petrol-fuelled indie hit has aged extremely well, delivering a healthy mix of speed, blood and apocalyptic destruction.

Opting for ‘Immortal’ as a subtitle not only references Zombie Driver’s insistence on never going away, but also acts a smart way of suggesting just how much of your time its likely to suck up, thanks to the amount content on offer here. The original story mode remains intact, casting you as a taxi driver who is forced to help other survivors in need of a lift amidst the zombie outbreak. It boils down to 31 bite-sized missions that, while brief, feature a range of tasks like defending key targets, transporting randoms back to base and taking down bosses.

So far so satisfying. And really, were it not for the fact that all your actions are performed from the seat of a weapon-equipped vehicle, there wouldn’t be much to separate Zombie Driver: Immortal Edition from, say, Housemarque’s Dead Nation. Learning to handle all thirteen different vehicles is key to your success, and in my 8 or so hours of playing I can’t tell you just how important it is to master the art of the handbrake turn. Thankfully, usually when you mess up – crashing into barriers, zooming headfirst into hordes and what have you – it’s usually down to your own influence and not that of the controls.

Outside of the campaign are two extra modes to keep you entertained. The first is Blood Race, which essentially runs you through the gauntlet of three unique event types in testing your racing, eliminator and endurance abilities. These are all actions you won’t have experiences in Zombie Driver’s story mode, and completing all 36 events is an entertaining challenge. Then there’s the Slaughter Mode, which is the best way to work on your killing spree. Here you’ll fight through waves of endless zombies to see how long you can last.

In every component of Zombie Driver are you constantly earning currency and upgrades that can be spent on your vehicle fleet, making you an even more effective slayer of the undead. Starting, as mentioned, with a taxi, you’ll eventually be offered the opportunity to boost the armour of your tank, nitro capacity of your limo, and so on.

The only real negatives I can highlight in Zombie Driver for Switch are all related to sizing issues. Namely, both the on-screen mini map and text size are too small. These can both be offset by playing on the big screen, sure, but cosying up on the couch to kill zombies is too fun. Other than that, visually the game shines on the Switch’s screen.

If you ever wanted to kill creatively with your own customised car, Zombie Driver: Immortal Edition is an absolute riot. Age has only been kind to this top-down vehicle game that sees Mad Max merge with The Walking Dead, and other than the slight size issues, it still looks and feels great to play.

Zombie Driver is a tour de force of vehicular undead destruction, proving that when Mad Max meets The Walking Dead only creative killing can occur.