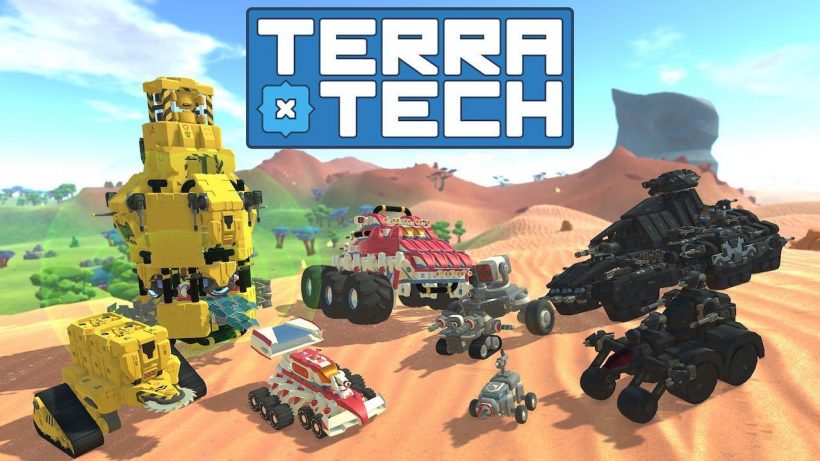 Minecraft certainly wasn’t the first building-orientated game on the market, but it’s certainly in the top few to revitalise the niche genre, giving it universal appeal to both the younger and older generation. It’s both for those looking for a fun romp, and those who wish to make working calculators. It made a dauntless task seem accessible and friendly, all whilst touting the ‘anything is possible’ mantra.

TerraTech, on the other hand, is the K’Nex to Minecraft’s LEGO; A much more daunting, technically-demanding experience. Whilst the scale of potential projects is much the same, the charm and character that the latter brings are sadly all but forgotten throughout.

Having started back in 2014 via a successful Kickstarter, TerraTech focuses on the detailed and complex creation of vehicles, with said vehicles then being used to traverse the randomly-generated world at large. The type of vehicle you create is up to you, and throughout the course of the game’s many quests and exploration aspects, it will build gradually into a more honed, function-complete beast than the base model that you started with.

The potential scope of the vehicles throughout are indeed impressive, and should this have been yet one module to a much larger product, Minecraft – both its apparent muse and its obvious competitor – would truly have something to worry about. With TerraTech focusing on vehicles and naught else, however, it forgoes the freedom so generously provided elsewhere and forces us to inhabit the world by their rules and design, not ours. Having only slight creative freedom over what could be a truly wonderful universe may not be the largest problem from a gameplay perspective, but it certainly limits both the initial draw and, most importantly, the staying power required in such a genre.

The resources required to build your various contraptions come in a variety of flavours, and this particular element will leave you feeling in your element, should you have played Mojang’s finest. Trees, rocks, and the rest of their ilk provide the expected materials required, and these components can then be further refined for more impressive, mechanically-apt building blocks for your project of choice. An alternate option – one I much preferred – was to farm resources, later to be sold, as well as quests, purely for the monetary reward that I could later exchange for the exact ingredients when needed.

As you’d expect, a much more complex building tool – one that focuses on building off of a core vehicular module, as opposed to designing your creation from scratch – requires a more nuanced control scheme, prioritising precision above all us. That strangely isn’t found here, with a drag and drop mechanic being favoured above all else. When this works, it’s a dream. The vast majority of the time, however, it’s a frustrating battle between the user and the controller, with elements ending up being placed near the planned placement area more often than not.

Whilst the scope of the creations is certainly commendable, especially considering the various weapon combinations you can employ to your heart’s desire, the payoff in losing direct control over the world at large ensures that the time spent playing the game, as opposed to just designing, feels uninspired. I hope that, should Payload Studios find themselves back in this universe, they open the mechanics up to allow complete influence over the environment; we may truly have a competitor to Minecraft if that happens.

TerraTech showcases its strengths proudly in focusing on vehicular creations, whilst leaving the rest of the world behind. Unfortunately, this immediately limits both the immersion and enjoyment found within, and leaves the experience feeling like an early-access title awaiting a larger content pack.