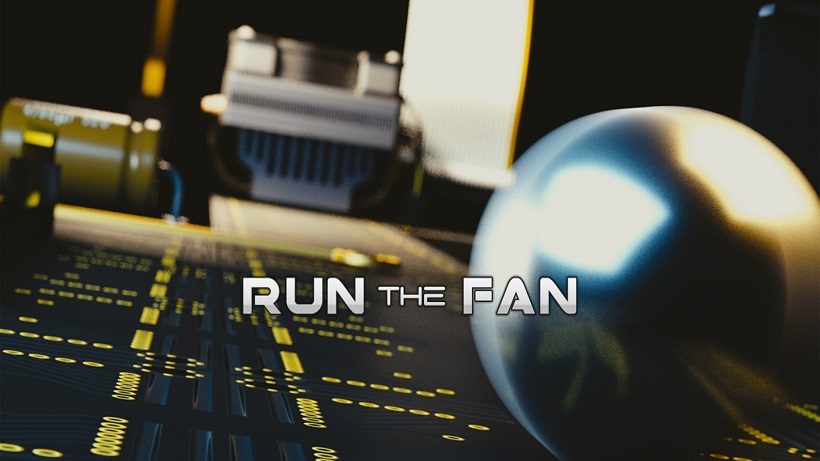 At first glance, the easiest way to define Run the Fan is to compare it to those wooden marble labyrinth games that you would occasionally see as a child. The initial difference is that Run the Fan provides you with a modern depiction of this and a theme more appropriate to a video game; that being the inside of a desktop computer.

Unlike the traditional labyrinth games where the aim is to get the marble to the end, with Run the Fan the objective is to help an electrical current reach the cooling fan that is located somewhere on the computer’s motherboard. There are different circuits that the current can travel along, but there are numerous gaps between them. This is where you come in. You control a metal ball and you need to roll it towards the necessary gap and hold it in place in order to allow the current to pass through.

At first, this is fairly straightforward, as you just need to work out the best route for the current to travel along whilst the current moves along. But, as you progress through the levels, there is an increase in obstacles making it more difficult to reach the intended gap. There is some clever game design at work here too, as rather than just make it difficult for the sake of it, the game plays with you into attempting one route, only for it to be impossible due to the speed of the current. That might sound punishing, but in practice, figuring out such a realisation feels rewarding. Soon you’ll also find yourself dealing with multiple currents in order to power multiple fans which is when the real challenge begins.

As you progress through the three stages – each containing 18 levels – additional challenges are placed upon you. Stage 2 introduces pitfalls and removes barriers, meaning your ball can now come off the motherboard resulting in you restarting the level. Stage 3, however, switches things up even further. Whilst the previous stages have contained multiple fans, stage 3 gives currents the ability to split into additional currents. This adds the need for considerable quick thinking and at times careful planning. Despite this though, the level of challenge is just right. You might fail on the first couple of attempts, but you never view a level as impossible.

Run the Fan is seemingly designed with the Switch in mind, and whilst the default ball controls use the control sticks, you can turn on motion controls which make the game feel even more like a traditional marble labyrinth game. Admittedly the game is easier using the stick controls, but the option for a more interesting challenge is there. It’s also recommended to play in handheld mode, as this is clearly the option the developers had in mind. The text and UI are scaled better for this and weirdly the fan seems to run more when in docked.

Visually there isn’t too much variation between the levels; ultimately, you’re just staring at different motherboards with alternative layouts, but they do look like a motherboard and the important elements on the board are always clear. The soundtrack, whilst repetitive, manages to avoid becoming annoying and does a good job of keeping you engaged and in the zone.

Run the Fan isn’t a particularly long game, but it does provide an enjoyable challenge and one that is perfectly suited to handheld play on the Switch.

Run the Fan is a surprising little gem of a quick-thinking interactive puzzle game. Whilst it might leave you wanting more, you’ll certainly feel that your brain has had a decent workout.