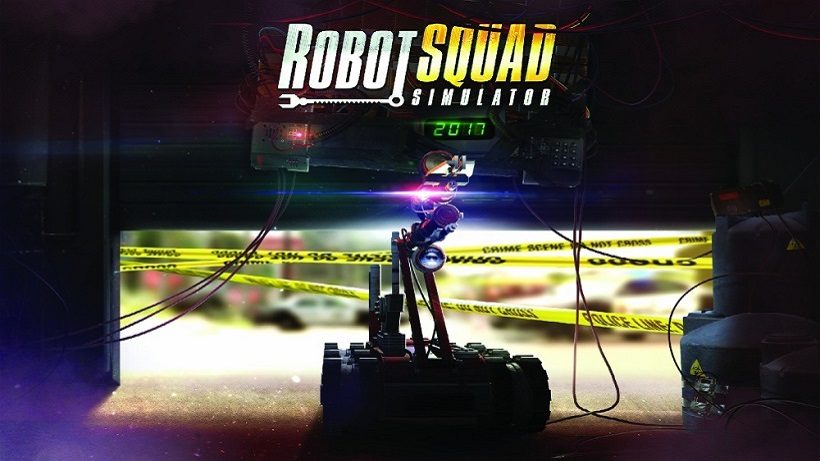 Right from the start, Robot Squad Simulator feels a bit disingenuous. Whilst it’s not a surprise to discover that this is a port of a Steam game, the fact that the 2017 moniker from the original release is conveniently missing from the main title, only to be front and centre on the first screen in what at times feels like a hobbled-together port for Switch, contributes to that negative perception.

Despite this criticism, this is by no means a terrible game, as there are some satisfying moments, but they are often bookended by frustrating ones. Robot Squad Simulator doesn’t refer to some kind of exciting Avengers-style force of super-powered robots. Instead, it’s about more realistic remote-control machines that can help in situations where it’s too dangerous for humans to handle.

This premise is actually an interesting one, and to the developers’ credit, what is provided – for the most part – does get to the core of this simulation. However, this simulator is problematic, with some instances throwing you right out of the experience.

One mission sees you attempting to locate a bomb that has been hidden in a park, while police snipers are on the lookout for the person who placed said bomb. For our reason, you must avoid the snipers’ lines of sight, otherwise they will fire at you instead. Surely, they would have been informed about the presence of such a robot? This is a petty complaint, and certainly, it makes sense from a gameplay perspective to generate extra tension, but it destroys the notion of the simulator. Remember, this is not trying to be something like Goat Simulator.

There are different types of missions available, and this necessitates the inclusion of different types of robot that can be unlocked and used when the mission calls for it, hence the “squad” element of the title. Some missions will see you switching between them, with one helping to clear the way so that another can finish the job. These robots all have different features and perks which determine both which areas they can access, and also what functions they have available.

Some robots are more elaborate than others, but the main complexity – and consequent frustration – comes from the “EOD” robot. This has an adjustable front arm that is most effective at disarming explosives. Whilst the controls do work, it’s a fiddly process that struggles to adequately stand up to later complexity.

The visuals and presentation of the game leave much to be desired, often looking like something from a console generation or two ago. But the worst offenders are the instructional signs, in which a Joy-Con has been poorly pasted in and subsequently looks like a blurred mess. Other times, assets just seem unfinished and placed almost at random.

Yet the core controls are the main concern, again. While fundamentally functional, they are a hindrance to the experience – just the act of moving is a drag. This is also hampered by your robot often getting completely stuck on a piece of scenery, causing you to have to restart from a previous checkpoint. This will mean replaying the previous 10 minutes, which more often than not will consist of slowly trundling from one point to another with little else to do. Overall, the Robot Squad Simulator has an interesting concept, but has flaws which make it a little rusty to play.

Robot Squad Simulator succeeds in temporarily making you feel like a bomb disposal expert one moment, only for the next moment to be more akin to crashing a cheap remote-control car.