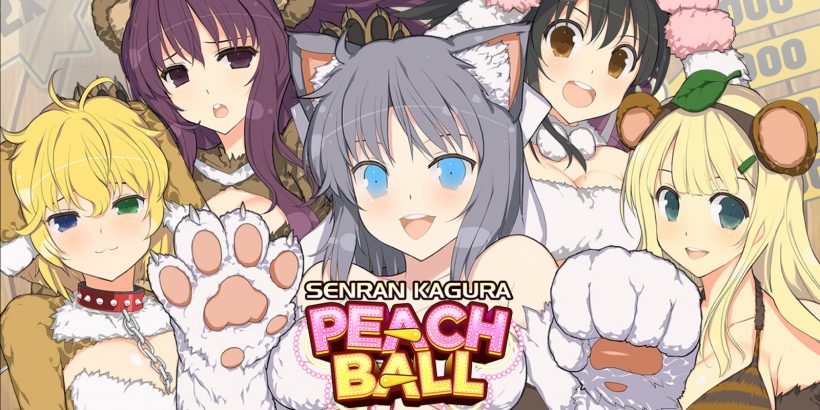 MARVELOUS!’s continued anime-themed glorification-cross-bastardisation of every possible category continues with Senran Kagura Peach Ball, a unique take on the admittedly underutilised pinball genre. Whilst it’s difficult to say that any Senran Kagura game is necessarily great, instead leaning towards being merely competent at best, Peach Ball clearly shows the amount of love and affection the developers have for both the cast of characters and the genre, culminating with an enjoyable, yet disappointingly light, title.

Peach Ball’s story is believably minimal. The overtly ridiculous narrative focuses on a serum that changes anyone who touches it into an animal, which is a predicament each of the characters find themselves in. Through the use of the titular Peach Ball, the characters are able to be changed back. It’s both wacky and whimsical in nature, consisting of light tones and appropriately nuanced dialogue. It’s most certainly not going to win any awards, let’s be clear about that, but I found myself enjoying the interactions, even if they were occasionally teetering on the edge of being cringe-worthy.

As would be expected, the meagre offering of two Pinball tables – Peach Ball and Spooky Shinobi Park – feature lewd artwork on the table itself, and hyper-sexualised characters in various compromising poses. Each of the five characters can feature prominently in their revealing and unique animal-esque outfits in the near-centre of the table and, depending on the various actions you may activate through your specific game, will be in one of many poses – again, all sexualised. With a point-based emphasis being placed on the breasts and bum, it’s clear to see that the developers confidently lean into the blatant DNA of the franchise, yet still somehow never rubs it in your face – pardon the phrase.

As far as the gameplay is concerned, it’s initially a mixed bag. The physics of the ball aren’t exactly as you’d expect if it were aiming for realism, with the ball’s movement skewing in the player’s favour more often than not. The paddles occasionally appear to make contact with the ball when, by the looks of it, they’re much too short, which can lead to temporary moments of disconnect. However, the flashy and overtly outrageous spectacle can easily distract you, culminating in a relaxed, casual experience, even as you aim for that high score.

The various elements found on each table truly reflect those that have defined Senran Kagura for many years now, specifically the aforementioned sexualisation of characters and their bountiful assets. Upon reaching set goals within games, bonus objectives appear, whereby you’re taken to a temporary table with an enlarged version of the character and, as taken verbatim from the game, “Bop her chest as much as you can!”.

Each game climaxes with the eponymous Peach Ball having its desired effect, changing the girl back to her fully human form, albeit just a tad naked. Playing to such fan service isn’t a crime, as this series certainly has its audience, yet it seems a missed opportunity by allowing only five girls and two tables to take centre stage in what could potentially be a much grander game – one that both could and should resonate with the hard-core Senran Kagura fanbase. Should the quality of the titles continue to match that found in Peach Ball, consider me included. Just don’t tell anyone.

Senran Kagura: Peach Ball displays new-found confidence and discernable competence when taking on a new genre, even if the overall package does appear light on content. Familiar staples from the series, such as unlockable outfits and dioramas, do pad the content out somewhat, making it a good title for fans of the series.