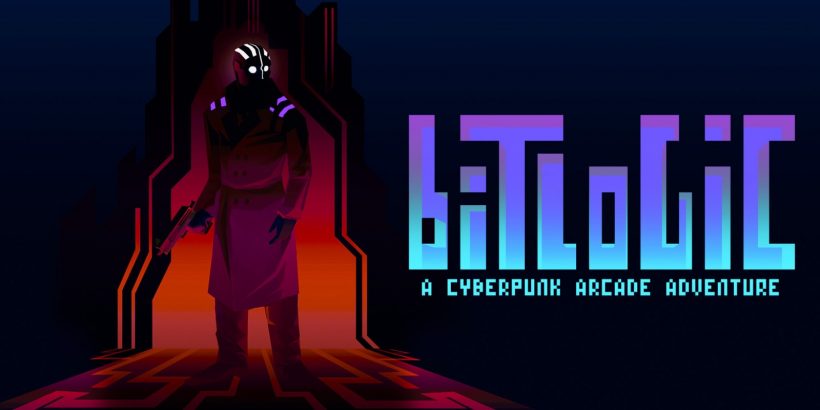 Originally a game developed for the MSX, Bitlogic – A Cyberpunk Arcade Adventure is a classic-esque arcade puzzle-platformer that harks back to the classic PC games which inspired it. Unfortunately, from a gameplay perspective, that’s to its detriment.

Bitlogic is a part-adventure, part-action, part-puzzle arcade game in which you must navigate cyberpunk-themed mazes while collecting computer chips in order to progress. You control ‘Bit’, an avatar within a virtual world. As expected, enemies must be taken out or avoided along the way, and the levels also have quite a lot of verticality, forcing you to consult the map and think about the order in which you tackle the screen-to-screen gameplay.

The controls in Bitlogic are EXTREMELY simple. The analogue stick controls your movement, and many of the other buttons fire your pistol. That’s it. Pacing about in his Rick Deckard/Nick Valentine trenchcoat, Bit can feel cumbersome and clunky to control at times, but to the game’s credit, the almost overly simplistic controls actually work as an interesting puzzle dynamic as you’re navigating the mazes. Not having the ability to jump, for example, forces you to think creatively in order to reach certain platforms, and your character’s meandering speed means you have to time movements in order to avoid threats.

Enemies in Bitlogic are just the worst, honestly, and that’s not just because they’re out to get you. They’re those classic, arcade enemies that respawn every time you walk off-screen, and it’s an absolute PAIN when you’re having to backtrack throughout. Additionally, some of the enemies are just plain unfair. The rolling-type spike enemies are literally impossible to avoid as far as I can tell, meaning you just have to take hits, and the airborne enemies’ movements are also too sporadic to plan around.

Being an arcade-style game, Bitlogic’s story isn’t necessarily important, but OXiAB have incorporated somewhat of a narrative revolving around Bit as a character, and there are different avenues to it depending on your decision. Throughout the game, Bit will begin to struggle with the fact that he is simply software created for your enjoyment, in some sort of meta, Black Mirror way, but it’s not very interesting, and it isn’t worth grinding through the game for a few additional dialogue boxes. The game does feature the original MSX graphics if you want the authentic ‘retro’ experience, which is a nice touch, and an achievements system adds some replay value into the mix. The HD rumble in handheld mode also works fairly well.

Overall, while the updated visuals and catchy chiptune tracks are a welcome addition to Bitlogic, and make it more of a complete package on Switch, the gameplay just isn’t very fun. Enemies and levels don’t have enough variety to keep the game feeling fresh, and backtracking to try and find items can feel like a chore. There are other games which feel like this which offer a better experience – you’d be better off heading to seek them out.

Bitlogic‘s labyrinthian stages have a sleek cyberpunk finish with some catchy chiptune tracks, but the presentational facelift doesn’t do much to alter the basic MSX gameplay, which can get monotonous fast. It’s not bad as an MSX throwback, but there are much better games out there on the eShop.