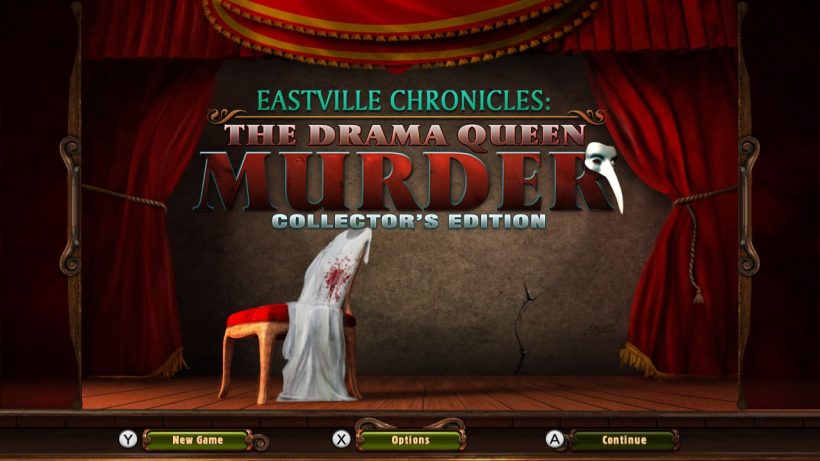 Murder-mystery games have been done to death. That’s an unescapable fact, so any games which appear on the Switch eShop scene need to be pretty memorable these days in order to be worth the time of day.

The Drama Queen Murder, or Eastville Chronicles: The Drama Queen Murder – Collector’s Edition, to give it its full title, sees you play as the woman investigating the murder of Dolores Molinero. You’ll be interviewing suspects – but only in the cutscenes. No, here the crack investigation to uncover the mystery assailant is done for the most part through a series of ‘find everything on this list of items’ puzzles. Those make up the core of the gameplay, while they are interspersed with those dialogue scenes and also isolated mini-game puzzles, which can include cracking codes, putting matching shapes together and connecting wires to form a circuit. These games do at least stop the hidden object sequences from feeling too much of a chore.

And that’s of utmost importance, as the overall presentation of the game always feels quite uninspired. With static character models, no animation and all of the dialogue displayed on the screen with no voice acting, The Drama Queen Murder has a difficult time building up any kind of personality for itself, and that’s a big issue.

It was due to this that a few days after playing through the game from start to finish, it was difficult to recall hardly any of the plot. For a game to stand out amongst the murder mystery games and the puzzle adventure games already on the Switch eShop, nailing the character and personality to charm players with the story is a must, but on this The Drama Queen Murder simply does not deliver.

There is another gripe to be had in the touch-screen controls, with the Switch’s handheld screen not allowing for the required amount of precision to touch the exact items that you want to as soon as you’ve spotted them in the environment. That’s not a chunky fingers issue, but it’s perhaps unfair to blame this game in particular, as a number of other hidden object games have suffered from the same issues on the switch. Using the Joy-Cons and control stick as a mouse is a bit more precise, but also a bit slower, as you’d expect.

Certain items on the list are highlighted, which was seemingly due to them being key progression items, and gave off a jump-scare-like shrieking sound when found, but there seemed to be no reason for this, as you still needed to find all of the other items on the list in the scene to progress regardless. Peculiar design like that is joined by spelling errors in the text which are pretty unforgivable, and just shouldn’t be slipping through into finished games which make their way to the point of appearing on the eShop.

The game’s ending, spoilers aside, feels as underwhelming as the rest of the experience, with a sudden confirmation of the identity of the killer and than an abrupt ending which comes quicker than a hiccup. And that is a summary of the disappointment of The Drama Queen Murder – the fun and mystery never materialise as you’d hope, and before anything has a chance to become compelling, they’re over.

Give this one a miss, and go and play one of the adventures from Artifex Mundi instead.

The Drama Queen Murder under-delivers pretty much across the board. Hunting down items is the best bit, but even that isn’t as good as it should be due to the dark colours and squinting requires to spot everything.