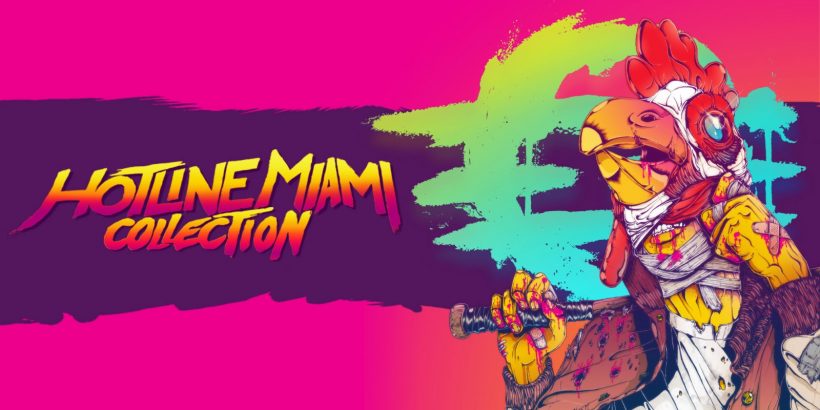 Making a sudden arrival on the Switch in mid-August, Hotline Miami Collection has brought its take on top-down pixelated gore and other adult themes to Nintendo for the first time.

Looking something like the top-down Grand Theft Auto games, Hotline Miami and Hotline Miami 2: Wrong Number has you traversing floors of buildings with the aim of obliterating every sign of life in sight in order to progress.

And this is a die, die and die again sort of game; one which is nigh-on impossible to complete without being mauled each time you go around a corner and learn your lesson. A particularly unforgiving title, Hotline Miami Collection is going to frustrate you and have you swearing until you’re blue in the face, but after five minutes of yelling and screaming you’re going to want to be picking up the controller again for another go.

But that’s not to say the game is a feat of perfect design. It’s cruelly difficult in places, with enemies off the screen being able to shoot you for a one-hit kill without you even knowing they’re there. There’s no one-way-fits-all way of taking on the levels, whether you go for the softly-softly approach of going in with your fits or a melee weapon and taking out the enemies one at a time, or pick up a gun to unleash some mayhem on as many people as you can manage. The game will always find a way to undo your plan.

Tapping the R button to shoot doesn’t feel intuitive enough, and the twin-stick aiming controls will prove quite infuriating as you plan a method of attack, only to accidentally fire a shot into the wall as the enemy bears down upon you. The game has an annoying tendency to have two or more enemies walk right on top of each other, and using the shotgun on them will often only take one of them out. They then react with lightning-quick and inch-perfect precision.

Keeping the nerve to maintain your aim with the right stick when under pressure from oncoming enemies is a hell of a challenge, though you can click the right stick to lock-on to one enemy. This is problematic, though; rapidly switching from one locked-on enemy to the next is far too difficult to perform at speed, and is just yet another awkward input likely designed to prolong the run time by having you die over and over again.

Masks which you unlock as you play through the game and which can be selected at the start of each level (naturally, you can only wear one) offer perks to possibly give you a better crack of the whip. One makes you invulnerable to dogs, another makes doors lethal if you slam them into enemies and others do things like increasing your ammo. But they rarely feel like they’re making much of a difference. You’ll still die just as much.

There is a slight, weird storyline element which tries to tie the levels together, but you’ll likely end thinking, ‘what the…?’ rather than appreciating the writing. The second game has been banned in Australia for its sexual content, so bare that in mind if you’re squeamish… ah, who are we kidding. With decapitations, gore and blood and guts all over the place, Hotline Miami Collection is a game for players who like their games on the violent side.

Hotline Miami Collection is certainly moreish, but suffers from irritating controls and a level of difficulty which crosses the border into the unfair. It’s for the sadists, that’s for sure.