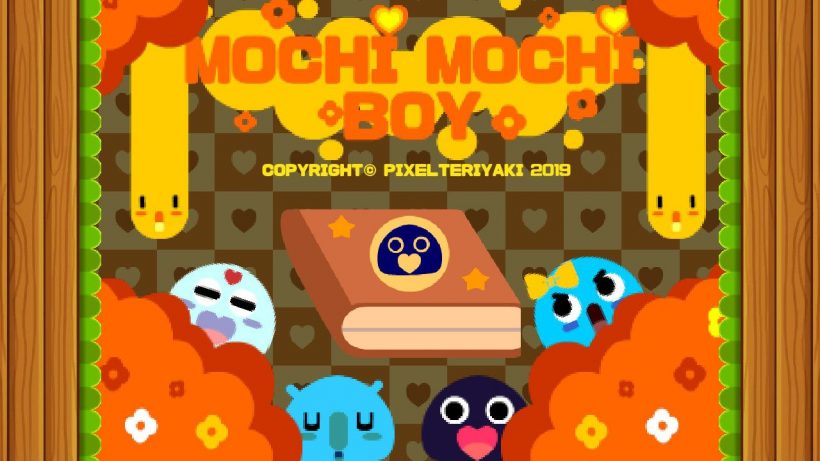 Mochi Mochi Boy is a simple, yet fun, puzzle game. It charms you with its childish visuals and challenges you with deceptively simple gameplay. Yet, you really shouldn’t buy it. Even the small price of £4.99 is a big ask for something that has less content and offers less value than most free mobile games.

In the beginning, Mochi Mochi Boy’s latest adventure with friends is brought to a halt as Lucifer himself shows up to wreak havoc. The innocent slime has accidentally wandered onto land owned by Lucifer, resulting in his friends being taken away and locked inside a castle. Thus, Mochi Mochi Boy alone must raid the Devil’s castle and free all of his friends.

It is quite an exciting set-up, a battle against the devil himself to save your cutesy slime friends. Well, the gameplay has nothing to do with this. Even the background graphics of the puzzles fail to reflect this plot, and it becomes so irrelevant to the point of feeling completely alienated from the rest of the game.

In each of the main 138 puzzle levels, you control a snake and aim to spread around each level’s checkerboard background. Your goal is to fill every square, and though levels introduce various obstacles as you progress (such as warp tiles), the challenge they present is limited, as all you’re required to do is fill in the squares and move through the treasure chests. Levels never change in appearance, and stock music loops frequently. With such a small pool of elements to each puzzle, the majority of them blur into an unmemorable mass.

There are a few different modes and options thrown in, though. The “Dungeon Mode” sets you out clearing ten random rooms in a dungeon. These ones contain more obstacles like bombs and have an overall time limit. The implication seems to be that they’re harder than the story mode, or even different. The gameplay is identical. The two modes may as well be one. There is also a “Paint Mode”; quite a grandiose term for picking a colour for your slime, wouldn’t you agree?

The entire experience feels like filling in a child’s puzzle in a doctors’ waiting room. If this is the Devil’s tower, then he’s taken mundane punishment to new extremes. It begs the question of what bureaucratic sin Mochi Mochi Boy committed to deserve such a dull version of hell. Truthfully, Mochi Mochi Boy too closely resembles the simplest of mobile games. The real kicker though is the number of nearly identical puzzle games you can pick up for free that offer an almost identical experience.

Developers have a big choice to make when releasing titles on the Switch; they can either optimise for release on such a unique platform, or ignore it entirely. Mochi Mochi Boy had the potential to play really well to the Switch’s strengths. It could have used the touch screen in handheld mode, or used the HR rumble to provide some feedback to the player, or included a two-player single joy-con mode like so many other Snake-like puzzles have done.

However, it took advantage of none of these ideas. It uses no more features than it has to, just input your movements and leave it there. Even if the game took advantage of the Switch specific features, it would do little to distract from the complete lack of imagination found in the game itself, and as such, it isn’t worth your investment.

Mochi Mochi Boy isn’t exactly a bad game; it is just a pointless one. The gameplay is derivative and nothing about it warrants the time it’ll take to download, let alone the price. If you’re a real puzzle devotee, you should probably just stick to Wario’s Woods and save yourself the fiver.