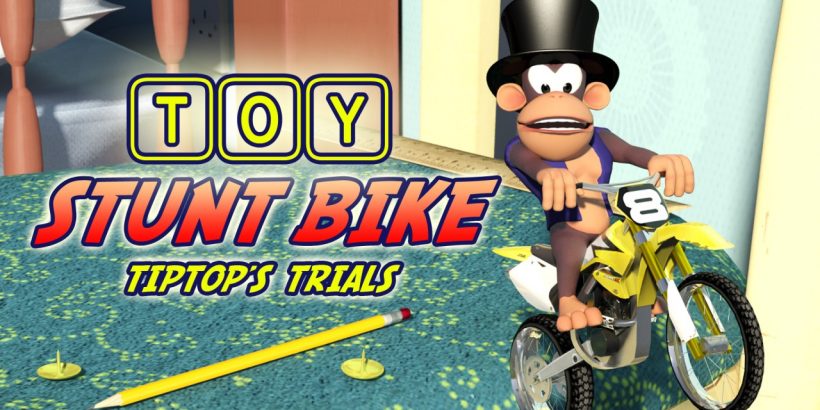 Toy Stunt Bike: Tiptop’s Trials is a 3D motorbike trials game. Very similar to the Trials series, players must guide the eponymous monkey Tiptop through various courses consisting of numerous obstacles in order to cross the finish line. However, this is a very, very basic version of Trials…

Toy Stunt Bike: Tiptop’s Trials features 36 tracks over the course of six different household locations; Bedroom, Kitchen, Bathroom, Dining Room, Living Room and even in the Garden. Each area has six accompanying tracks, although it’s fair to say you’re pretty much just playing the same track in a different variation each time.

Sadly, the game won’t last you very long, as each track can be completed within less than a minute, and I had completed all tracks within a day of playing. I wish I could say I was disappointed to have finished it so quickly, but there was nothing about the game that made me want to keep playing. There is a hint of replayability though, as each level has three trophies to collect: One for the time you complete each stage in, one for your total score, and one for collecting all three available racing flags. I can’t say there is any point in doing so though unless you really want to, as it doesn’t offer anything extra. The way in which you increase your score is simply by doing ‘tricks’ during the tracks. Airtime, flips, wheelies, they all add up.

I was disappointed to find out that there is also no customisation at all in the game, something Trials titles and others in this genre often have. No other bikes to unlock, no upgrades, not even a new hat for your little character. Nope, none of that. This means that there isn’t any motive for you to continue playing, no end goal – nothing to aim for.

Strangely enough, it’s almost impossible to ‘fail’ during each track. For example, if you go too far back during a wheelie, you’ll just stay there and be able to accelerate forwards until you hit something that will tilt you back up, and even landing on your head multiple times will do nothing. I sometimes got stuck during certain tracks – annoyingly – and struggled to even force myself to fail… That was until I discovered the bail button.

To suit the basic gameplay, the game also has basic controls. All you pretty much need to know is that the A button is to accelerate, and moving the Left Stick controls your movement. You won’t use any other button, aside from to select the next stage or the odd checkpoint restart. It’s that easy. I even completed some tracks just holding the A button… not even moving.

Toy Stunt Bike: Tiptop’s Trials doesn’t necessarily look bad – I’ve seen much, much worse – but it doesn’t catch the eye. It’s, again, pretty basic. It would have been nice for the items you are riding over to feel more… real? For example, riding over a tube of toothpaste doesn’t have any movement… it’s just a solid object. The same can be said about the game’s soundtrack. There’s nothing wrong with it, so to speak, but it just gets lost in the noise of the bike. You almost forget that it’s there unless you’re really listening for it, and overall, it reflects the entire experience: Basic.