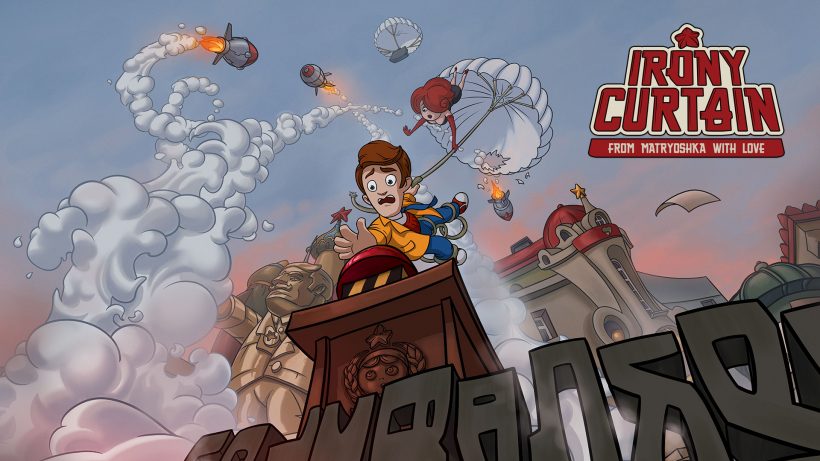 Set at the height of the Cold War, this humour-loaded game tells the story of Evan Kovolsky, a goofy American journalist and socialism advocate, who travels to the fictional communist country of Matryoshka following an invitation from femme fatale Anna Eglove. Once on the ground, Evan soon learns that all is not as it seems, and he is quickly thrust into a web of intrigue and endless paperwork.

Inspired by classic games of the genre, Irony Curtain blends stunning stop-motion animation, numerous hand-painted scenes and an atmospheric soundtrack to create a gripping and believable world. Humour also plays a particularly important role in the game, as the state’s residents gently poke fun at the absurdity of their situation and the regime under which they live. Played in handheld mode, these interactions feel even more secretive and rewarding, but docking certainly allows for a better appreciation of the artwork.

The game itself is divided into a series of chapters, each with a specific goal. For example, in one chapter, you may find yourself traversing several areas to gather or craft the items needed to build a disguise, while another may require you to complete several mini-games in order to rack up enough points to progress further. Although this variety does well to prevent the gameplay loop from becoming stale, some of the mini-games verge on a departure from the genre, and felt a little out-of-place.

Irony Curtain is certainly not for the easily frustrated, as the game requires a certain amount of tenacity, but you’ll soon learn that curiosity and experimentation are key to success. For instance, unsuccessfully attempting to merge two inventory items results in only a witty remark from Evan, rather than the loss of either object, while selecting the wrong response to an NPC’s question simply lengthens the conversation. So exploring every option and thought, no matter how strange, will serve players well.

However, if players find themselves especially perplexed, help can be found; from hot spots highlighting all points of possible interaction, to telephone helplines to characters who can offer hints on how to complete specific task steps. However, even with all the help on offer, some trains of thought will run along especially convoluted tracks, and players may find that a little assistance from Comrade Google is in order.

As challenging as the puzzles are, the controls are simple and gameplay smooth. From time-to-time, Evan’s run animation stutters, but not for any great length or to the point of distraction. More importantly, players with dexterity issues may find the analogue controls frustrating due to their hit-and-miss nature, and exiting a cutscene partway through caused some unexpected (although not game-breaking) character teleportation.

Of course, for most of us, it’s hard to imagine the undercurrents of fear and paranoia that run beneath the surface of a communist regime. But Irony Curtain excels in bringing to life not only the reality of living under such a regime, but the resilience of the people trapped in it.

Irony Curtain: From Matryoshka with Love £17.99

Irony Curtain: From Matryoshka with Love is a beautifully executed point-and-click experience that combines a gripping narrative, humourous characters and rich scenes to create an unforgettable espionage adventure. Fans of the point-and-click classics won’t want to miss this one out.