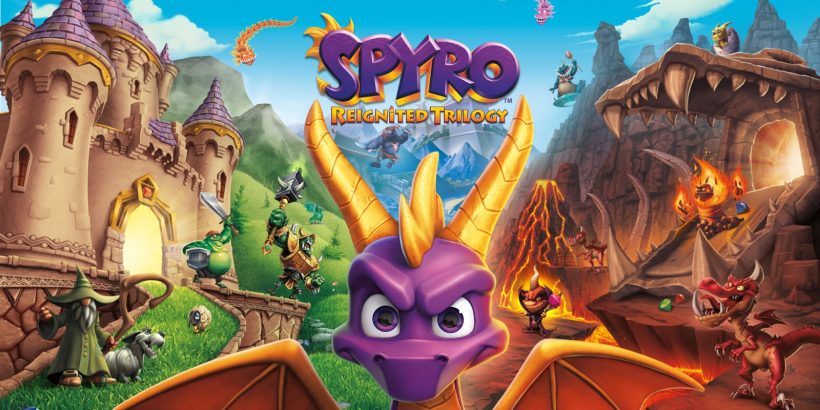 I’m not one to look back through off-rose-tinted glasses at the yesteryear of video games all too often, at least within reason. Whilst some video games may hold very special places in our hearts, they’re often relative to the time in which you first experienced them and usually don’t hold a candle to our memories once the dust is blown off for it to be consumed yet again.

Spyro Reignited Trilogy, however, does not suffer from these problems at all, providing an incredible and character-rich remaster that manages to effortlessly hold all of the original charm, and so much more.

For those not familiar with the wonder that is Spyro, the Reignited Trilogy neatly packages the original three Insomniac Games-developed PlayStation games – released in 1998, 1999 and 2000 respectively – into a singular offering complete with all the modernisations you could possibly hope for. Thankfully and, somewhat surprisingly, the gameplay by in large feels untouched, or at least feels akin to what I remember 21 years ago. Unlike the recent Crash Bandicoot N. Sane Trilogy – developed by Vicarious Visions and ported to the Switch by Toys for Bob – there’s no spike in difficulty to be found here. Spyro always leaned towards the easier side of the difficulty spectrum and whilst added difficulty wouldn’t go amiss, I’m nonetheless glad it’s a faithful recreation of my childhood memories – Oh look, I’ve got those glasses on again.

Containing the aforementioned original trilogy, you’d be forgiven – should you have not experienced the titles before, of course – for expecting a potential meaningful variation from game to game, at least in terms of the core gameplay experience. Whilst there are slight evolutions, such as additional abilities and, in the case of Year of the Dragon, additional playable characters, the objectives remain largely the same. That’s not to say that the gameplay loop is bad by any means. Whilst the idea of going to each instanced area and performing various level-specific tasks, whether it be protecting villagers from dinosaurs or the like – along with the not-so-specific, such as collecting gems and dragons/talismans/eggs throughout their respective games – should be one born of a repetitive nature, it instead provides a familiar excuse to both enjoy and experience the unique, inviting words laid before you.

And boy oh boy, are they stunning. The level of not only competency but understanding that developer Toys for Bob show for the originals is outstanding. At no point do any of the new elements, such as the unique dragon skins shown throughout Spyro the Dragon and Spyro: Year of the Dragon especially, feel out of place but instead act as an extension to Insomniac’s original design. The personalities and animations so proudly shown seem so reminiscent of Insomniac’s later titles, most notably the Ratchet & Clank series, that it’s clear to see it’s in keeping with the original artistic intentions intrinsically woven within the very DNA of Spyro as an entity.

Thankfully, the competency shown is abundant throughout the entirety of this stellar title. The level of quality found throughout the Switch port is of such high calibre that any prospective buyer, whether it be a first time purchase or a double-dip should you have played these on their more powerful console counterparts, need not worry. At least, for the most part. As expected, Spyro Reignited Trilogy runs at a lower resolution when compared to the aforementioned releases on the PlayStation 4 and Xbox One, and the general texture quality won’t seem as sharp in comparison. Should I have viewed the Switch title and not compared and contrasted though, I doubt I would have noticed a difference. Minor frame hiccups also occasionally appear, but these are few and far between.

The crux of my nostalgia-induced pleasure was, surprisingly, the seemingly-forgotten melodies that I get to experience yet again, albeit this time with a more full and complete instrumental take. The option to swap between the reimagined and original soundtrack is available for those that wish to experience Stewart Copeland’s original compositions is available, however, and is most certainly a welcome addition.

One can only hope that the marvellous job Toys for Bob have done on the Spyro Reignited Trilogy makes way for a potential new title in the series. Whilst further Spyro games were available after the initial run, they lacked the particular je ne sais quoi that the PlayStation titles had. Unbeknownst to Insomniac, it appears the torch has indeed been passed and, should they be given the chance, there’s a bright future ahead for our favourite purple Dragon.

Whilst most remasters simply up the visuals and leave it at that, Spyro Reignited Trilogy has been deservedly given an overdue modernisation that brings it in line with the best of the best today.