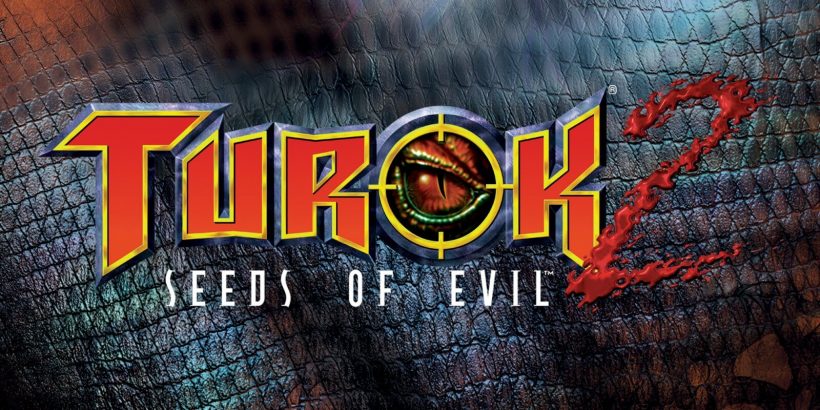 DOOM has the BFG. Half-Life has the Gravity Gun. Turok has the Bow. While it might sound weird to think that some shooters are built entirely around a single weapon, those that follow this trend tend to leave a pretty big footprint within the world of games.

As the latter’s first sequel, Seeds of Evil might not be especially well-remembered compared to other games to have done this, but it does hold up decently in its own right via this recent Nintendo Switch re-release. For those not in the know, Turok 2 originally released in 1998, as a Nintendo 64 exclusive. While some of its contemporary design decisions feel archaic by today’s standards, the general act of gunning down dinosaurs across time is still immensely satisfying.

Unabashedly made in the same mould as a lot of early FPS games, what made Turok 2 stand out was its distinctive set-up, which sees a world of aliens merge with dinosaurs. You play as Joshua Fireseed, an unsuspecting warrior-hunter who is suddenly tasked with defeating an otherworldly menace called the Primagen. Doing so requires clearing out legions of enemies across six diverse levels, always with your trusty bow in hand.

Thank heavens, then, that shooting in Turok 2 still feels tight – even over 20 years on. The game hails from a time before aiming-down-sights became the norm, and firing from the hip here works accurately. It’s why the bow still manages to trump pretty much every other weapon the game slowly dishes out to you, elevated even further by the implementation of the Switch’s gyro controls.

What doesn’t hold up so well are the environments, which run the gamut between simplistic and impossibly obtuse due to poor signposting. Every level drops you into a new setting to explore, but each has its own set of tasks that must be completed before you can advance to the next.

This may sound fine in theory, but almost all of them swiftly become a test in patience when you’re forced to navigate a maze-like series of corridors, portals and similar-looking interiors. Finding objectives always feels like too much of a puzzle. Although this remaster eases the pain somewhat by including objective markers, it brings about its own set of issues by letting you see them through walls – not very helpful, to say the least.

The original release of Turok 2: Seeds of Evil was infamously plagued by inconsistent FPS drops, and fog was needed to cover up level loading. Thankfully, it appears the latter has been pretty much removed in this remaster, with gameplay feeling silky-smooth throughout the ten-hour (ish) campaign. This really is the best Turok 2 has ever looked. While textures might appear flat and without detail for the most part, structures and character models are still incredibly crisp when now rendered in HD. Small details like seeing enemy blood splatter on the wall behind them can be fully appreciated in all its grizzly glory.

Overall, Turok 2: Seeds of Evil’s return to a Nintendo console in the form of this definitive Switch version is well worth playing. Playing through the game today essentially means undertaking a history lesson. There’s no doubt plenty of better shooters available on Switch, but diving back into this cult classic offers value in letting you see how far the genre has come. It still remains totally playable if not wholly enjoyable, despite some inherent design flaws, and pulling back that bow using motion controls only highlights what the game does best.

Turok 2: Seeds of Evil is a classic Nintendo 64 FPS that perfectly enraptures the charm of its era. Certain design decisions struggle to translate well to the modern times, however, rendering the act of shooting dinos feel fun in some areas but obtuse in others.