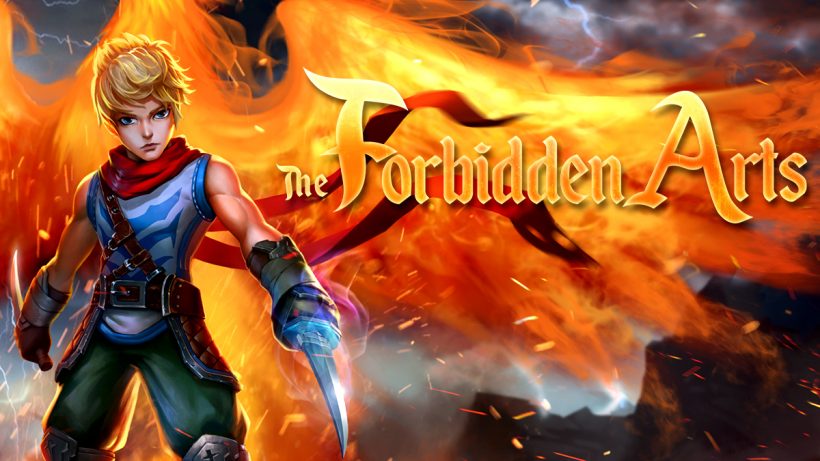 There’s something to be said about games that thrust you into mystical worlds full of magic and lore; their stories just beg to be delved into. But, creating such captivating spaces is a hard task, and one that must be tackled carefully – even more so at a lower budget. It’s a shame, then, that the developers behind The Forbidden Arts clearly had a vision of a complete and magical world, but it struggles to cast an effective spell on players.

Playing as the young boy Phoenix, you’re swiftly told of dormant magic within you that grants you the ability to control fire. This is the hook for the story: rediscovering your pyromancy status and embarking on a journey to fully harness the power of the flames.

The Forbidden Arts is split across two play areas: the overworld, a fully 3D environment (albeit a very basic one in its layout), and dungeons, which embody 2D platforming stripped down to its very basics. Though it’s fairly easy to control Phoenix in the overworld – as you have full use of the camera – the majority of the action takes place in the dungeons, with the world above only acts as a linear bridge to travel over to the next dungeon.

Sadly, battling through dungeons is a slog. The map can’t be enlarged, and the combat system feels half-baked and broken at times. Even the enemies don’t seem to know what they’re doing, which feels frustrating and underwhelming. You could drop from a ledge, and chances are the enemies will walk away, granting an easy escape. I even cleared a dungeon by running past most of the enemies on one occasion. Though there are gold pieces to collect, making the exploration of areas a tad more interesting, endlessly wall-jumping to get to bosses that are painfully easy to slay becomes incredibly tiresome.

Thankfully, there are puzzles to solve, and these help to break up the action. One, for instance, requires activating levers in a specific order to then roll a couple of boulders into two holes, with invisible switches hidden within. There are also some classic platforming elements, such as climbing vines while avoiding protruding spikes, and jumping past falling rocks, which grant some fun and varied gameplay into the mix.

NPCs hark on about using your pyromancy from the very beginning of the game, but never did I actually want or feel the need to. Squeeze ZR when you’re near a flame, and you’ll fill up your fire gauge. Then, with a press of X, you can fire a ball of flame at your enemy. It’s unintuitive and unresponsive a lot of the time, and as such, it feels like a waste of effort.

From enemy hitboxes to invisible walls, the general flow of The Forbidden Arts is rough and jarring, and its repetitive and mundane soundtrack had me reaching to turn down the volume on more than one occasion. It never seemingly exceeds 12 bars of music, so heading into a different section of the game only gives you a few moments of respite.

Overall, The Forbidden Arts is a largely forgettable title. The combat is hit and miss (literally), the music is uninventive and the story is mediocre at best. You may find enjoyment in the simplistic approach to platforming, but the game’s shortfalls will more than likely cause more frustration than enjoyment.

The Forbidden Arts will remind you of those old 99p bargain bin games with a drab colour palette, annoying music and half-baked combat. Some platforming elements are enjoyable, but the overall package is a chore rather than a joy to play.