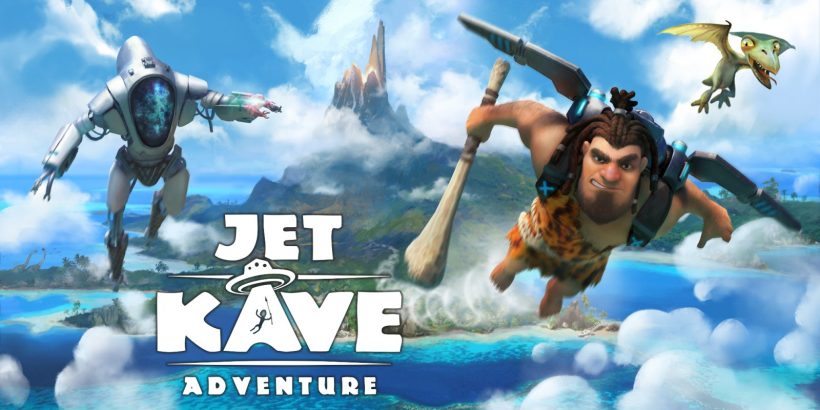 There are times when a game feels so satisfying to play that you just get lost in it. Suddenly, and before you know it, it’s over – often too soon. Jet Kave Adventure is a 2.5D platformer from the folks over at 7Levels that delivers in many areas, and that could have elicited these sorts of feelings, but sadly, it falls short of the greatness it could have achieved.

The aim in Jet Kave Adventure, like in most platformers, is to reach the end of each level by jumping across obstacles and defeating scattered enemies that try to prevent you from reaching your goal. The game deviates very little from the established formula, and offers nothing revolutionary or new to the genre – and this theme unfortunately translates into other aspects of the game, too.

If you’ve seen the promotional materials for Jet Kave Adventure, I’d be surprised if you weren’t a little confused as to what the setting of the game actually is. In actual fact, the game sees you placed in a fictional prehistoric setting where humans and dinosaurs roam the world together. As it turns out, aliens aren’t all that uncommon either. After being banished from your tribe, you come across an alien which drops a jet pack – a jet pack that immediately becomes a core gameplay element.

Those who have played games akin to Donkey Kong Country will feel right at home here. Offering a similar experience, Jet Kave Adventure consists of 36 levels of platforming joy – of course with the addition of the jetpack. Despite the apparent theme clash, nothing is taken away from the gameplay – quite the opposite, in fact. The platforming is incredibly satisfying and refined, with the jetpack adding an extra layer of depth to the moveset that is endlessly fun to use. It’s a good job, too, as the campaign story is almost as extinct as the game world’s inhabitants.

Jet Kave Adventure offers some further interesting breaks to the platforming formula, in that there are regular, surprisingly challenging boss fights thrown in, side-view, Temple Run-esque escape sequences, single screen fights against waves of enemies, and both horizontal and vertical autoscroll jetpack rides that somewhat resemble a mobile game. For the most part, these are welcome, though on rare occasions they do appear cheap and unfitting.

Speaking of cheap, visually the game is far from impressive. The graphics serve the required purpose, but offer little more than that. The 3D models appear almost as if made of plastic, are rushed at times, and while the backgrounds are decent, they border on the repetitive. Nothing about it is distracting, just very uninspired. Fortunately, the game does however run perfectly well in both the docked and handheld modes due to these unimpressive visuals, so if performance is your priority, then this game has you covered.

Jet Kave Adventure, while being a largely enjoyable platforming experience, feels like it ends too soon. The game certainly may have benefited from another set of levels, but its replayability and good level length hold it up somewhat. As such, don’t let the level count detract from the experience, or put you off.

While it may have some flaws, the game is undoubtedly a lot of fun. Sporting smooth, high quality platforming, alongside interesting boss fights, this is one of the higher-quality platformers on the Switch eshop. If this is the sort of thing you’re looking for, then Jet Kave Adventure is definitely worth a look.

Jet Kave Adventure may offer very little in the way of innovation, but its refined and enjoyable gameplay makes this an easy recommendation for platforming fans.