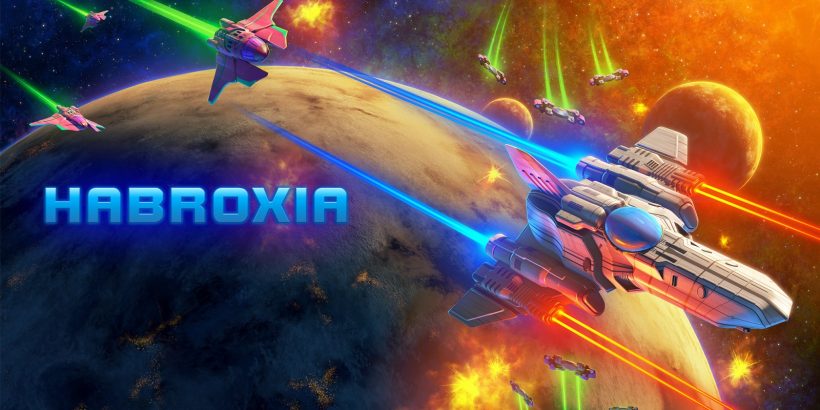 It would be weird, these days, to have a week of eShop releases on the Switch without a new addition to the console’s shoot-em-up range. Habroxia, from Lillymo Games, is one of the more recent arrivals, but its design, look and gameplay constitute a package that harkens back to the very earliest days of the genre. This is a space shooter where players eliminate hordes of enemy minions before taking on a more challenging boss to complete each level.

With a choice of three standard shooting styles – shooting dead ahead, to either side, or unleashing a spray of bullets – knowing which to use and at what time is the difference between success and getting overwhelmed. These shots can, of course, be added to or adjusted by collecting the various power-ups littered throughout space (a perfectly logical place for them to be found, floating in mid-air…) or else by upgrading your ship through the use of credits, which again can be found floating in space.

There aren’t too many occasions where swarms of enemies will dominate the entire playing field, and in truth, you may find that there are only one or two occasions where there are too many enemies on the screen to handle. Avoiding incoming enemy fire doesn’t prove to be too much of a chore, and there is a boost button to help you career away from spots of trouble should you need it.

That said, I never felt that I needed to use it. In fact, danger usually came from the most unlikely source: the walls. While dashing around, firing upon enemies and dodging their bullets as they rain down upon you from the opposite direction, it’s very easy to collide with the borders of the playable area. Some terrain can crumble when shot, yielding power-ups and credits, but the sides of each stage are unforgiving – so do your best to avoid them.

There’s very little to Habroxia that the player won’t expect. Enemies come in a small range of different forms, with few showing any sign of intelligence when it comes to shooting you. The majority are on a pre-set flight path where the only real challenge is to time your strafing right so you avoid their shots, while also scoring some accurate shots back at them in return.

A pretty bitesize experience, Habroxia will only take up two to three hours of your time before its story is concluded. Levels are named after objectives, which can prove quite puzzling when the command is to destroy all enemy ships, yet simply dodging them will be just as effective in your bid to make it to the end of the stage. Some levels make sudden switches from horizontal to vertical scrolling, but this impacts the overall shooting experience very little.

Once the fifteen levels of the game are out of the way – each of them offering just a few short minutes of entertainment apiece – the reward is three endless modes which act as high-score-a-thons. These extend the replay value of the title somewhat, but it remains underwhelming. The whole on-rails space shooter thing has been done so many times now that it really struggles to get the blood pumping in 2019, so the whole experience just feels rather dated.

Thus, Habroxia is an alright space shooter, but it does nothing at all to stand out from its peers. There’s little challenge, few new ideas, and the bare minimum in terms of the personality which will keep players pushing on for those high scores.

Habroxia is a space shooter that’s far too straightforward and lacking in personality. It won’t live long in the memory at all, and perhaps is a symbol to indicate that this genre has become dated.