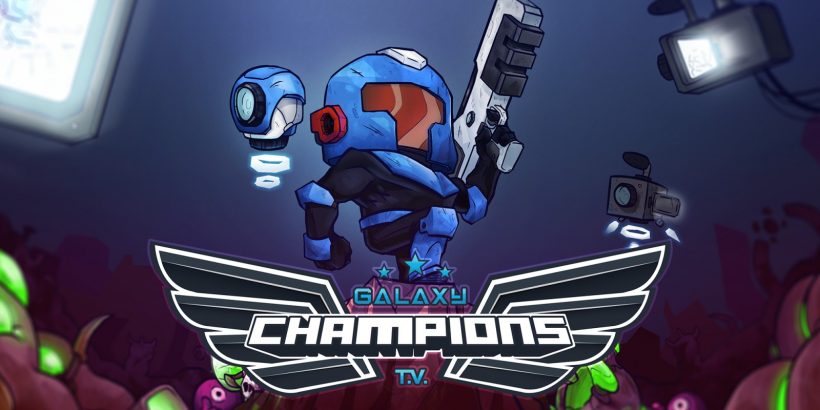 Call me crazy, but I’m a sucker for future-set television shows that threaten the lives of their contestants. An idea first popularised by 1987’s The Running Man starring Arnold Schwarzenegger, it’s a sadistic concept that video games have aped countless times ever since, arguably influencing the entire Battle Royale genre, which in turn has given us Fortnite. Yay?

Several other smaller-scale games have also often tackled the idea, forcing players to fight their way out of a publicly-broadcasted gauntlet in the hopes of surviving. Galaxy Champions TV is a delightful take on this addictive formula – one that’s fun, frantic, and always had me coming back for more.

Developed by aQuadiun Games, Galaxy Champions TV originally released on PC in September 2018. Fast forward to just over a year later, and now this ruthless top-down shooter set within several closed arenas has finally come to Nintendo Switch in all its pixelated glory. A good thing, too, considering how well-suited it is to short bursts of play. It’s up to you and a possible co-op partner to blast your way through four diverse planets, each jam-packed with their own unique enemy waves to overcome, always getting better as you progress.

Galaxy Champions TV is at its best when you’re right in the throes of the action. After all, it’d be a shame for a game of this style to suffer from how it feels to shoot and move, but thankfully here it’s not a problem. Guiding your character around is effortlessly smooth whether using the analogue stick or the D-Pad, and this makes gunning your way through the 40 enemy-stuffed stages immensely satisfying. You’ll start off as an underpowered grunt with only a measly handgun to your name, but blasting foes away earns you currency that you can then spend on upgrades.

The available upgrades are nicely thought-out, influencing the effectiveness of every discoverable gun type as well as improving your general movement ability. One of the earliest upgrades purchasable on the first planet, for example, is a dash ability that is incredibly useful for getting out of a pinch. Getting overwhelmed is always a possibility in Galaxy Champions TV, so it’s nice to know that there are tools available to help you to improve your chances. There are 15 to unlock in total, and these always stay with you, rather than being wiped after each run.

As mentioned, you can duke it out alone or with a second player, but those looking for an extra layer of challenge after the brief campaign can jump into what’s known as Champions Mode. It’s here where you see how long you can last in your quest for a respectable score for the global leaderboard. Top-down shooters like this lend themselves well to score chasing, and this mode alone ensures that Galaxy Champions TV won’t leave my Nintendo Switch dashboard any time soon.

Galaxy Champions TV is the perfect pick-up-and-play shooter for whenever you have a spare five minutes. Its campaign is shallow and won’t take you very long to complete, but the tight, fast-paced action is only backed up further by a charming soundtrack and art style that lovingly pays homage to the pixel era.

Should post-apocalyptic life-threatening TV shows be this fun to take part in? I don’t know, but it certainly makes for an addicting video game – one that’s found a perfect home on Nintendo Switch.

Galaxy Champions TV is an unrelenting take on the top-down twin-stick shooter, but one filled with enough pixel-based charm and tight gunplay to make returning to it never a chore.