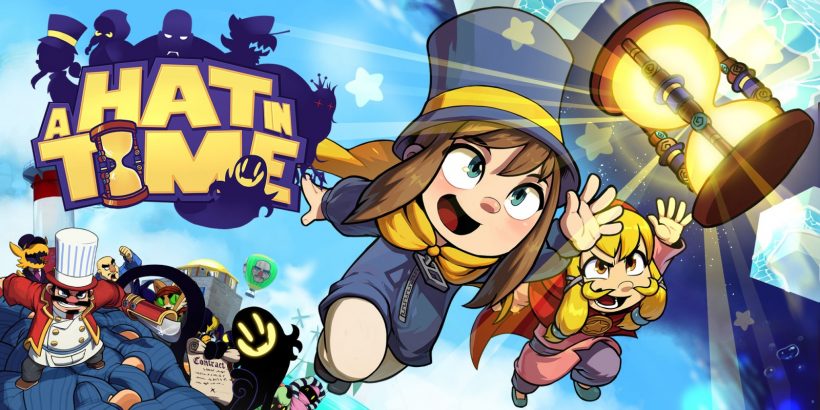 A Hat in Time is a 3D platformer that calls back to the GameCube era of 3D platformers through and through. Being more akin to Super Mario Sunshine, this one has obvious draws to Nintendo audiences, and finally makes its home on Nintendo Switch. Featuring the Seal the Deal DLC that adds an additional world and a harder difficulty mode the Switch version is currently the definitive way to play this title. Gears for Breakfast have triumphed in making an original title in this genre that can place its hat right next to some of the best, but along with that comes a lot of the aged mechanics that made the 3D platformer go extinct.

Hat Kid is travelling through space on her adorable child-safe spaceship, when a greedy Mafioso comes a-knocking wanting a toll to be paid. After a brief struggle, your ship is damaged, and your fuel has spilt out all over the planet below. These fuel sources, the Time Pieces, can be used to manipulate time, thus making them quite valuable. So, it’s up to you to gather up these pieces again so you can get back on your way. The story is a fun-loving trek through adorable ups and downs and is a definite strong suit overall.

Platforming, as you may have guessed, is a mainstay for this title. Jumps, double jumps, dashes, sprinting and more nearly mimic everything you will remember from Super Mario 64, and the added abilities from the various hats you can get allow for some more interesting mechanics throughout the playthrough. Things don’t feel as rigid as those more classic titles did, which means accuracy in your landings is a little bit tougher to nail down.

Hats are not only an accessory for the cutesy Hat Kid to adorn herself with, but also allow for much more depth in your platforming skills, as well as in fighting and puzzle-solving. From throwing explosive potions to a ground pound-esque ice transformation, you will be able to really open things up once you gather all the hats. Plus, in semi-Metroidvania fashion, there are areas and portions of levels early game that cannot be accessed until you progress and gather up the hats necessary to get you through those portions of the game.

Puzzles are never something that make the game too complicated, as they are generally just platforming tricks or something that requires a specific hat to get through. I honestly felt this portion of the game was a bit lacking, as most of the time you’re just rushing through levels gathering up collectables and making your way to the endpoint to gather up your next Time Piece, so a bit more in terms of other things to take up some of your time would have been a welcome addition.

As is customary, 3D platformers are known for their incessant collectable gathering. This is a blessing and a curse, as it adds a ton of gameplay for you to work through, but also can be tedious and monotonous. You may have guessed that the Time Pieces are the equivalent to “shine sprites” or “moons” in the Mario 3D platformers and need to be gathered up for total completion. Also, you have things like yarn, that allows you to build yourself new, useful hats, and “pons”, which are the basic currency for this title. Collectathons died out long ago due to the tedium, and the same issues you will remember from gathering up puzzle pieces and dragon eggs come through in this one.

The various worlds you will travel through, though diverse, offer a little less than expected. It was definitely a plus to have the extra world available from the Seal the Deal DLC, but there are still only six chapters for you to play around in. To be fair, these chapters offer up much larger play areas in general for you to look around in when compared to the classics, but with only around six acts per chapter, this does feel a bit content-light. Especially when you consider that the overall playtime will net you somewhere between 10-15 hours, depending on your speed and completion rate.

Regardless of the old fashioned mechanics and short length, this is still a notable 3D platformer that fans of the genre will be very happy to have had the pleasure of playing through. I found the levels of nostalgia I felt to keep me going through it all, even when there was a shortcoming or two. All in all, if you are someone who misses the heyday of this genre, and you freaked out at the announcement of Crash Bandicoot and Spyro the Dragon being remastered, for example, then this is another title that can satiate your thirst for a while.

A Hat in Time brings back a genre that, as Nintendo fans, we hold a ton of nostalgia for. Even with some archaic mechanics present, this is still one of the best modern examples of what a 3D platformer should be.