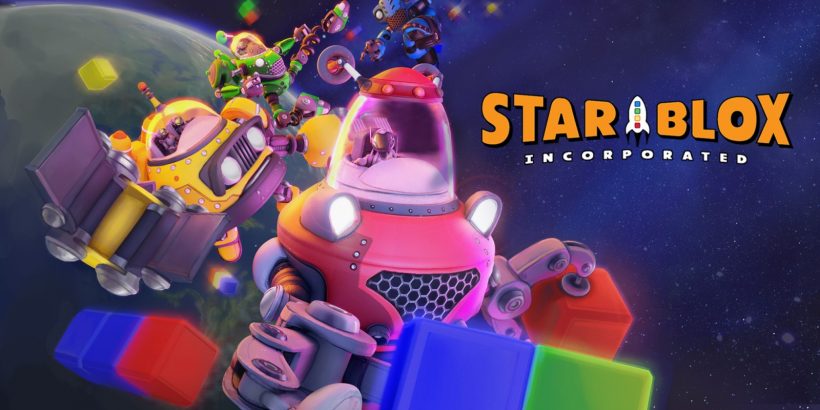 StarBlox Inc. comes to the Nintendo Switch library combining puzzle with brawler in a Super Smash Bros. meets Tetris Frankenstein’s monster. Co-developed by Ingenium, Canada’s Science and Technology Museum overseer, this title not only offers one of the most unique concepts to gameplay I have ever seen, but also a compendium of knowledge on our solar system from NASA themselves. Featuring a single-player mode, along with a couple of offerings in local multiplayer, you have a good amount of content outside of the fully-fledged book on planets.

Welcome to StarBlox Inc.! You are in charge of operating a bi-pedal robot whose job is to sort the incoming cargo. You must be quick and efficient to best the competition, as they also have their cargo bots prepared to grab everything they can. Be warned, your rivals can be fierce, as their automatons will attack and steal from your own as you all avoid the various obstacles the planets you are working on have in place. With quirky, pro-company quips there is a lot of charm here that comes through, regardless of the fact this title lacks any sort of actual story.

The name of the game is being the better bot — garnering the most blocks with which to build up a proper chain of cargo — to lead you to victory. As the blocks are piped into the arena, you will have to punch, grab, and fly your way to the cargo, and as long as your aim is true, plopping said cargo into a proper pattern. Each stage has you needing a certain number of each coloured block to be connected in order to win the round. Although this concept is easy to understand, the actual practice of it is something else entirely.

Aiming works rather poorly, with a basic control scheme of holding the B button to begin aiming, followed by using the analogue stick for accuracy. Even though the controls are basic, they just don’t work very often. I regularly tried to get a block to slide down into the perfect position, without anything trying to stop me, to just have it settle in at the top of wherever I was aiming, closing off multiple chains in the process. On top of that, you can’t just fling blocks willy-nilly onto the board, as you have to make an actual connection with an open block of the same colour. So, when this happens, you literally have to sit and wait for a multi-coloured block of a matching type to come through in order to progress.

When taking all of that into account, now have up to four of your screaming friends also trying to do the same thing while punching and grabbing at each other nonstop. It is one of the coolest ideas for a game I have seen, but it just doesn’t actually work that well.

One of the few saving graces here is the artwork offers scientifically accurate backdrops, along with a soundtrack that sounds a bit like a 90’s work training video pumped up to the max, so that was something I appreciated.

StarBlox Inc. is one of those titles that suffers from having a cool premise, and not really caring if it works in practice. I would say you should at least consider buying this for the planet information, but even that is gated behind gameplay, so it isn’t even a good encyclopedia.

StarBlox Inc. offers a unique couch co-op puzzle-brawler experience that, unless your friends are extremely passive, won’t work that well for you. This is largely due to its unpolished controls and hit-or-miss accuracy issues.