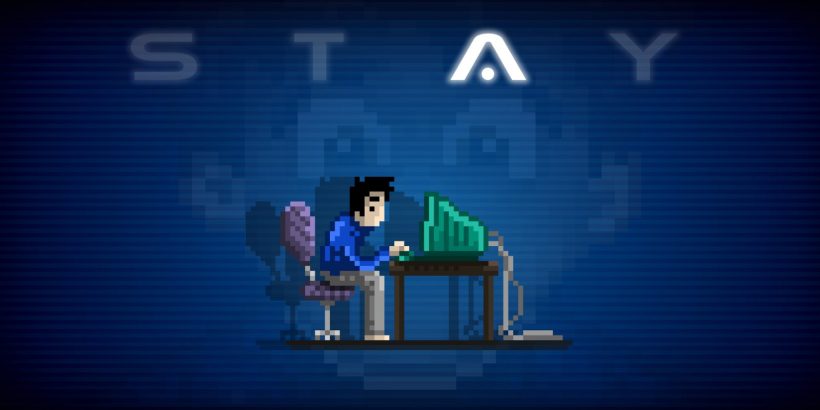 There are some slow-burner classics in gaming. You know, the games that don’t burst out of the gate with action and excitement, but instead allow interest to simmer, grow, and eventually come to a boiling point.

Stay – developed by Appnormals Team and published by PQube – recently became the second Switch title to get a physical release from Red Art Games, and offers a strange beginning, with an online chat being initiated by a peculiar boy named Quinn, who appears to be trapped in an unfamiliar room. Quinn’s emotions are all over the place, and you must act as his guiding light by giving him advice on what to do to lead him towards a route out of the room.

Heavily story-driven, Stay isn’t just about what the player does – it’s also about what they don’t do. The game gets its name from encouraging players to stay sitting with the game, as time spent away from the game in real life can negatively affect Quinn’s psyche. This time is displayed on the game’s computer screen, and Quinn will be affected in his mannerisms towards you as a result of your enthusiasm or negligence towards him. All the player can really do is to choose between choices of two or three responses at infrequent gaps in what Quinn is typing to you.

In comes the building of the tension, the intrigue as to whether Quinn will be able to escape his predicament safely, or indeed whether Quinn is who he says he is at all. Quinn is a stranger, after all, and his presentation as somebody who has managed to initiate an online conversation with you is likely to strike a slightly uneasy chord with the modern-day gaming audience.

I’d hedge my bets that most people aged between 15 and 35 today have had at least some experience of talking to a total stranger online, such is the amount of time we all spend alone with our laptops and smart devices. More often than not, the nature of these conversations can be quite seedy, or can be revealed to be borne of sinister motives, so there is always the sense of dread that Quinn might be an awful person speaking under false pretences, preventing you (just as it did me) from forming a close bond with him.

There are some mini puzzles interspersed within the gameplay, with such puzzles including putting fragments back together and placing books in the correct order on a bookcase. These puzzles aren’t often overwhelmingly challenging, but at least always feel new, and are not repeated.

The story is the main element here, and you need to be keen on following the narrative in games to have a good time with Stay. The conversation with Quinn is one-sided to such an extent that it can feel like a child or a really clingy and unwanted lover desperately trying to get your attention in a somewhat cringeworthy fashion.The game’s pixel art is nice, though, and does stand out as one of the high points of this offering.

Stay is a slow burner to such an extent it might lose players’ interest ahead of the conclusion of its six-hour-ish runtime. A more believable dialogue would have helped with engaging players, as it’s easy to find your eyes straying from the screen when your contributions to the dialogue are as infrequent as they are here.

Stay is a slow-burner which feels uneasy throughout with its dark and seedy-feeling online chat setup. There’s some good story to unveil here, but things are too one-way to make for a great game.