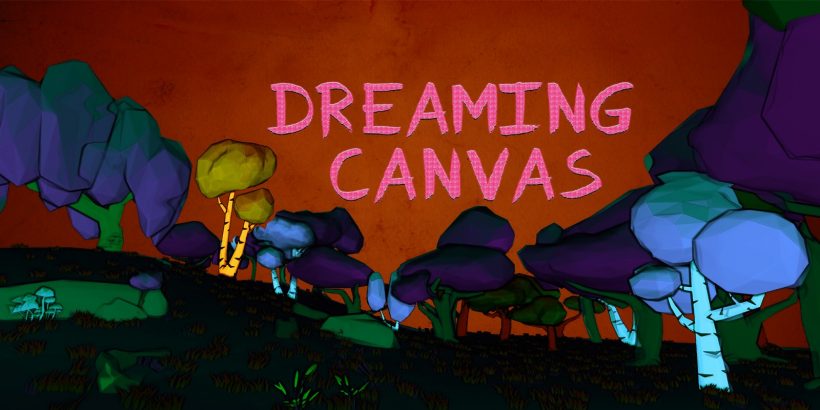 Delightfully crafted worlds and bright, low-poly graphics have never piqued my interest as much as in Dreaming Canvas, but I also have never come crashing back down to Earth so hard with the realization that I was about to play through something that offered absolutely nothing of interest.

Dreaming Canvas is a first-person exploration title from Playstige Interactive that has you playing in five separate worlds in order to search out canvases, people, and inspirational quotes. Unfortunately, the charm and aesthetic presented here is quickly overshadowed by a serious lack of depth and some questionable assertions about what you will be doing with your time across the different locales.

After choosing one of the five locations from a snow-laden city to a great forest, you will begin wandering around with nothing but bright, red beacons in the sky to direct you towards your goal. As you reach the corresponding easels, you will find a blank canvas that the game purports will be the beginning of your artful adventure. However, you are simply presented with an image that allows you to alter its colour, shadows, and line width with various sliders. After making some minuscule changes, you apply it to the canvas, and move on. Since the overlying theme here is about “art” it is pretty disappointing they don’t offer you any real substance in manipulating the images, and the process left me wanting more.

Beyond these canvases, you have glowing inspirational art quotes littered throughout each level that give you some wisdom from many of the world’s greatest painters and artists. You walk into these areas and a line of dialogue is read out to you. The fact the game is voice-acted here is the only cool part about it, as the title doesn’t offer achievements for collecting them all, and you aren’t given a menu or location to re-read or display them. It’s just a one-and-done affair here. In fact, rather than wasting your time moving around these environments to collect the quotes, you could simply Google some instead and get the same effect.

Finally, the game mentions “interesting travellers” to meet along the journey. Again, this isn’t the case, as the people you run across just stand there staring into space, occasionally becoming the subject of the painting you unlock on the canvases. No dialogue, no interaction; they are just there for some reason.

The only redeeming quality here is the fact that the locations are quite pretty and well-made. It has that “walking simulator” art-piece feel, for sure, but lacking any real objectives or motivation means you have even less of a reason to put up with having no real gameplay features. Without a story to hold this title up, I can’t think of any real reason to recommend anyone play this, and the game doesn’t feel to me like a final product.

Dreaming Canvas offers such an unsatisfying and lacklustre experience that you would probably have a better time just painting your own picture at home, regardless of skill. Beautiful locales and charming low-poly art design aren’t enough to make up for the seriously lacking gameplay, that teeters on the precipice of being straight up false advertising. Without the purported painting or collection mechanics present, this is simply a grouping of areas for you to wander around in, which you could just do in real life instead for free.

Dreaming Canvas offers very little in terms of gameplay, fun factor, replay ability, story, redeeming qualities, and much more. But hey, at least the locations you wander around in look pretty good. Kudos to the art team.