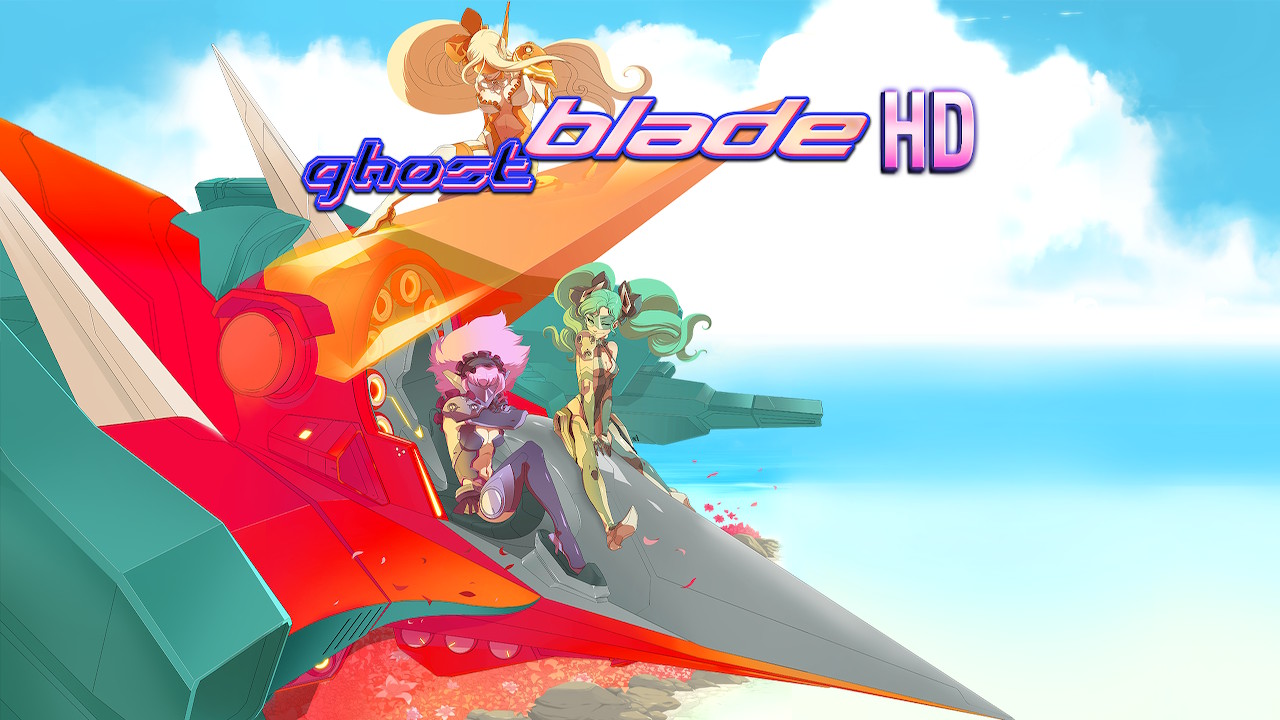 Ghost Blade HD from Hucast Games is inspired by the bullet-hells of the 90s. Its gameplay’s resemblance to DoDonPachi by Cave makes this clear, although the art looks more modern, similar to Crimzon Clover: World Ignition from Yotsubane. The game was actually released for the Dreamcast originally, before being ported to several modern systems.

Starting off, you get to select from three different ships. The fastest one is Milan (green), then Rekka (purple), then Ghost (red), while the strongest is Ghost, then Rekka, then Milan. If you’re not good at memorising patterns, then you will probably want to go with the quick manoeuvrability that Milan has. Each ship has different coverage when powered up, and also the ability to switch between focused attacks and normal, wider-ranged attacks. Focused attacks also score you ‘Tech Orbs’, which will contribute to your high-score.

Hit boxes in Ghost Blade HD are fantastic. On the ship they’re nice and small, and the ones for the bullets are the same size or slightly smaller than them. This makes it very easy to navigate the screen. The attack patterns are incredibly simple, which makes this a perfect introduction to the bullet-hell genre if you’ve never played before, or if you simply dislike memorising attack patterns. There is an easy, normal, and hard mode as well – though it might still feel a bit too easy for more advanced players, even on the highest difficulty.

There are five stages, each with a boss at the very end. The bosses themselves aren’t particularly memorable, and they lack any unique or interesting transformations; their explosions upon defeat are rather lacklustre as well. The final boss feels particularly anticlimactic, and this combined with a story that’s not even included in the game is rather disappointing, unless you count Evil Shira being mentioned in an achievement upon first defeating it. Even then, you’re left without knowing who you were fighting or why.

The game features a nice options menu, offering customisation and some convenient tweaks. Here, you can adjust the transparency of Tech Orbs, change the wallpaper, select languages, change explosions to bright or dark, adjust brightness, customise controls, edit volume, view credits, and switch soundtracks. The different soundtracks are both very good and pleasing to listen to as you play. They’re basically the definition of hype music.

Two player mode is fun, but takes a little adjustment, as getting enough points for each player to upgrade their attacks can be difficult. The faster (but weaker) green ship particularly had trouble with this. Past that, it’s a lot of fun to play with a friend, and surprisingly enough it’s not too hectic to tell what’s going on. The levels, patterns, and bosses don’t change for 2-player mode either.

There are Leaderboards as well, with different sections across difficulty level and multiplayer, which is a welcome bonus. Unfortunately however, if you’re not connected to the internet, then you’ll keep getting prompted to connect when you start or finish the game. It’s a bit of an inconvenience and makes it a hassle to play on the go.

Ghost Blade HD is a very fun game all-in-all. It could benefit from taking the design and animation to another level, or adding some unique mechanics, but it still manages to be fun. It’s something that you could easily keep going back to without tiring of it, and certainly a welcome addition to the bullet-hell genre.

Despite lacking some polish, Ghost Blade HD is an immense amount of fun. The leaderboards make you feel very motivated to get higher and higher scores, which undoubtedly aids its replay value. It will keep you coming back for more.