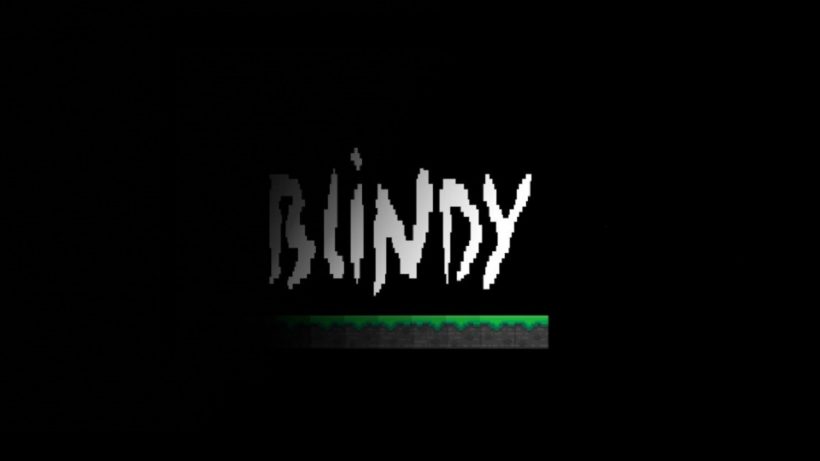 “Try to not smash your device.”

When the eShop listing shares this poignant piece of advice with you before purchasing, it is based on the assumption that you are going to play long enough to feel the desire to do so. In the case of Blindy, even finding the desire to keep playing is rather difficult.

Developed by Radoslaw Felich, Blindy is advertised as a hardcore 2D platformer with Souls-like difficulty. It tasks you with navigating a single-screen section of platforming with extremely limited vision. So limited, in fact, that the only platform you can see is the one you are stood on. Edging forward, you can sometimes catch a glimpse of objects ahead, above, or below you, but often not before you’ve died at their unforgiving hands.

Herein lies Blindy’s greatest flaw: it’s not fair, no matter what the eShop description may say. Games are often a test of skill, with the player feeling a sense of satisfaction after overcoming obstacles and solving problems. They’re enjoyable. Blindy, on the other hand, is a test of luck. Your aim becomes remembering the route taken, and attempting to better it the next time. Blindy‘s fundamental difference here – the darkness – means that while you may try to remember the course, it is all too easy to misjudge where the obstacles are that you are trying to avoid, and you’re forced to start again.

For those with the required stamina, perseverance and luck, there are 60 levels to complete in Blindy across its four game modes. ‘Classic’ mode sees you reaching the star to unlock the next level, ‘99 lives’ gives you said 99 lives to complete a level, ‘Lucky 15’ similarly gives you 15 chances to complete a level, and ‘Random’ sees you play a random level without limits. Each level has a hidden coin to find, providing an extra challenge to complete in order to boost your top score. Again, though, the assumption has been made that the player will want to stick around long enough to participate in all this.

For Blindy to have been a hit, it would have taken several design changes. If a wider circle of vision had been provided from the beginning, that would have been a good start. A progression system involving the light dimming the closer you get to the end-of-level star, also, would have ensured a decent challenge without losing players to the Souls-like difficulty spike from the very beginning.

As is, Blindy tries to support players by making visible the platforms they most recently landed on when starting a new run, but this ends far too quickly to be of much use. It also offers an ‘Easy Mode’ where, at the start of the level, you can briefly see the entire level – but again, this is over too quickly to see very much at all.

There are a whole host of games where death is par for the course – take Celeste as an example. What’s different between these two games though is that Celeste offers stunning visuals, an excellent soundtrack, and rewards players’ skill. Blindy, just as it is lacking in fun, lacks in every one of these departments as well. Ultimately, it is hard to say whether Blindy has potential as the execution is so poor. As unfortunate as it is, it seems it realises a concept that should never have seen the light of day.

On paper, the concept behind Blindy was something worth exploring. In practice, it is a frustrating, shallow and uninviting platformer that would have been better left in the dark. In the battle of expectation versus reality, neither won here.