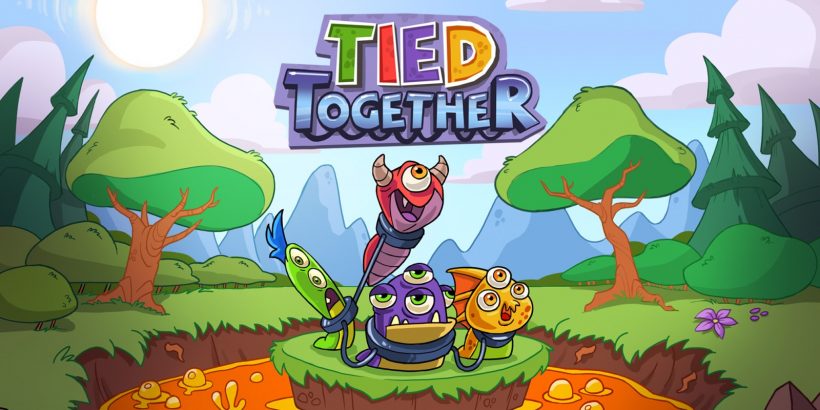 Thank god for Napalmtree, publishers of co-op platformer Tied Together, which is a traditional platformer in every sense other than your character being tied to another character controlled by your friend. Yes, this is a co-op-only title, so single player fans don’t get a look-in, but you can play with up to three friends, practically ensuring you lose at least one friend through game-induced rage.

The nature of Tied Together is that all players need to be in sync. If one moves to the right and jumps up to the next platform, the other players need to do the same to advance through the level. That’s the basic control input, of course – throughout the course of each level will be a series of platforming puzzles which must be solved by thinking of ways to utilise the pulling of ropes to help players reach points of the level they might not be able to get to through traditional platforming.

There might be a collectible which lies above a vast crevasse – simply jumping towards it would result in an immediate plummet to your death. But, with the assistance of the rope, the other players can run in the opposite direction to the brave player’s jump, and drag them back to safe terra firma. That’s not the only way the rope is cleverly used. By getting to a higher platform, one player can dangle and swing the other player underneath that platform like a pendulum, hopefully generating the momentum to pick up a key or a treasure that would otherwise be completely out of reach with a standard jump. The rope appears to be dangled behind the platforms (ie, not the side of the platform closest to the camera), so this negates the chance of the rope colliding with a platform if multiple players are jumping through the air and across the screen.

Fortunately, if one player on the team does manage to die, the other team members can revive them by getting close enough. Now, this can prove quite tricky if that player has managed to die by falling into the abyss, particularly with a team of two, because the other player will need to find the momentum from somewhere in order to bring their partner back up to the screen. But the chances are if one person makes a mistake, the others will end up plummeting straight after them to meet the same fate.

But that’s the beauty of Tied Together. While there may not be a lot of content here – forty levels for two players and twenty for three/four – actually playing through the levels evokes a great sense of teamwork and hilarity ensues for each of them. There aren’t too many games which really nail co-op gameplay like this – think about how you went to war with your family the day that you got Snipperclips and started cutting each other’s characters to shreds – and there really should be more games which nail this concise couch gameplay experience. For that reason, there’s something of a pleasing retro feel to Tied Together. There’s just enough variation and switches to the gameplay mechanics to make you feel like a lot of thought has gone into the game’s modest selection of levels – and depending on your number of friends, there may just be some replay value to speak of too. Check it out.

Tied Together offers fun, co-op, trial-and-error gameplay in its short runtime. The price is a little steep, but few games do co-op platforming this well. The players being tied together brings everyone closer for decision-making and that’s a recipe for great fun.