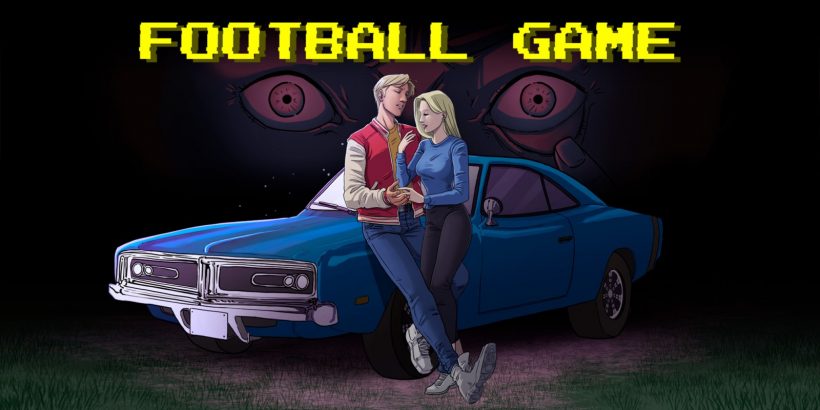 We all remember our teenage years – secondary school (or high school over there in the States), discovering boys and / or girls (depending on your persuasion) and things never quite working out just how your inexperienced self thought they would.

Football Game, a point-and-click from Ratalaika Games, is a short story which takes in all of these themes. You play as high school football star Tommy, a resident of East Bend, USA, who has plans to go to a college football game to meet up with his girlfriend. But things quickly begin to unravel for Tommy, and his journey to the game doesn’t go remotely close to how he expected, with things feeling dark and sinister throughout.

Inspired by the point-and-click thrillers of the 80s and 90s (actually, we’re pretty sure that there’s more of this type of game being released in the 2010s than there ever was back then), Football Game looks akin in places to something which might have been produced on the Philips CD-I. The visuals certainly haven’t got any kind of “wow” factor, and the enormous floating heads which appear when any kind of dialogue is being delivered are quite unnerving, to say the least. For such a short game, this isn’t that much of an issue, but if Football Game were to plod on beyond its one-hour-ish playtime, we’d have most certainly been clamouring for something a little easier on the eyes.

This is a very basic point-and-click – and it’s very short. The narrative involves a short jaunt around Tommy’s house, before a quick exploration of the football stadium. There’s very little by way of interesting characters to encounter, and they’re usually involved in just the one short puzzle and then you’re done with them. Then, when the plot’s twist comes, it signals the end of the game, and with no replay value to speak of whatsoever, you won’t be coming back.

The challenge level isn’t particularly high – each of the game’s puzzles has a logical solution which should jump out almost right away – shady characters might ask for cigarettes, prompting you to double back on yourself in the direction of that bad boy who was puffing on them like a trooper a few screens back.

The trickiest things might get is to memorise codes for changing room lockers as you see them written down elsewhere – but that’s nothing a pen and paper won’t help you out with. There’s a lot of picking up an item in one place and using it in another, but there’s nothing which really comes out of left-field. Your mum wants a coffee? Better put some coffee beans in a mug and switch the kettle on.

Don’t be under any illusion – there’s no sports element to this game. The likelihood is that the game’s name might put quite a few point-and-click fans off the scent, which is a puzzling conundrum. But you won’t be throwing any balls, making any passes or joining in with jubilant celebrations at any points during the game’s story.

Where Football Game might have been a little more valuable on other consoles due to its very easy-to-get achievements, the Switch’s lack of support for such a function makes this version difficult to recommend. There’s nothing here that will blow players away, and you’ll be playing the game simply for a tiny burst of retro graphics-inspired nostalgia than you will for any satisfying point-and-click gameplay.

Football Game is a short and largely forgettable point-and-click. Its visuals are the most notable part, but with no achievement system on the Switch, there’s little else to drag you in here.