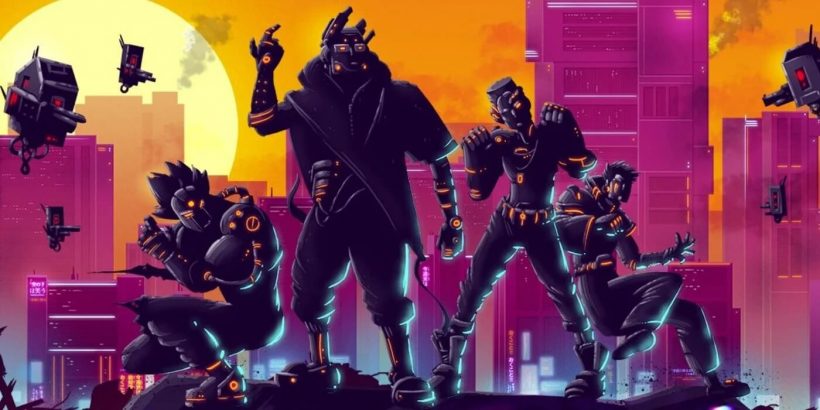 How much can you accomplish in 18 minutes? Cook a lasagne, learn a card trick, maybe even finish the chapter of a book. For each of the five playable characters present in Black Future ’88, however, that length of time must instead be used for something much greater: saving the world from nuclear apocalypse.

Simply put, that’s how long they’ve got before their hearts explode. Such is the premise of this thoroughly enjoyable and stylish 2D action roguelike, where you’re tasked with toppling a colossal megastructure as quickly and creatively as possible. This is one indie gem that feels right at home on the Nintendo Switch.

Black Future ’88 wastes no time in dropping you in at the deep end, with every run starting at the base of Skymelt Tower before you attempt to reach the top. Standing in your way are all manner of cyber-infused bots, bounty hunters and mini-boss Wardens set to test your shooting and slashing ability, all as part of the ultimate vertical gauntlet. There’s some attempt at a story relayed via text logs and the initial start-up exposition, but ultimately all you need to know is that this war-torn world is caught in an endless age of 1988. The key to stopping it depends on your successful ascent.

Helping you on this journey are the five starter characters, most of which you’ll unlock relatively early in the first few hours. Each tout their own buffs, weaknesses and weapons that allow you to tailor runs to your preferred style of play, but it all eventually evens out as you acquire more upgrades. Upgrades in Black Future ’88 are unique in that most aren’t unlocked through currency, but rather the game’s most valuable commodity: time. There are around 30 upgrades in total you can come across, with some being so powerful that you’ll become ‘cursed’ (forced to inherit negative traits) should you wish to install them. Black Future ’88 is very good at letting you choose between risk or reward in this way.

The gameplay itself is appropriately fast and frantic, seeing you clear out rooms packed with legions of enemies while always dodging their bullet fire. However, as the floors of Skymelt Tower are always procedurally generated, Black Future ’88 can at times suffer from feeling too challenging in the lower areas.

For instance, I got really lucky with my first run, ascending all the way up to through the first four sections before ultimately dying. I couldn’t manage this for the next three attempts, though, largely due to the game spitting out poor upgrade drops that didn’t suit my playstyle. Like most roguelikes, your success can sometimes be down to a dice roll.

Even still, Black Future ’88 does manage to shake things up with daily challenges and leaderboard rankings, which are appreciated additions when you consider that reaching the top of Skymelt Tower sometimes won’t take you that long. There’s simply a lot of inherent replay value in a roguelike as stylish and as fun to play as this. The synth-based pulsing soundtrack alone is enough to inspire you to get back into it again immediately after a failed attempt.

While there aren’t any Nintendo Switch-specific features to speak of, having the option to play Black Future ’88 portably with another player makes it all too tempting to pick up for short bursts. There are worse ways to spend 18 minutes.

Black Future ’88 is a neon-drenched 2D roguelike that effortlessly encourages you to undergo repeated runs thanks to its great music, style and short bursts of fast-paced action.