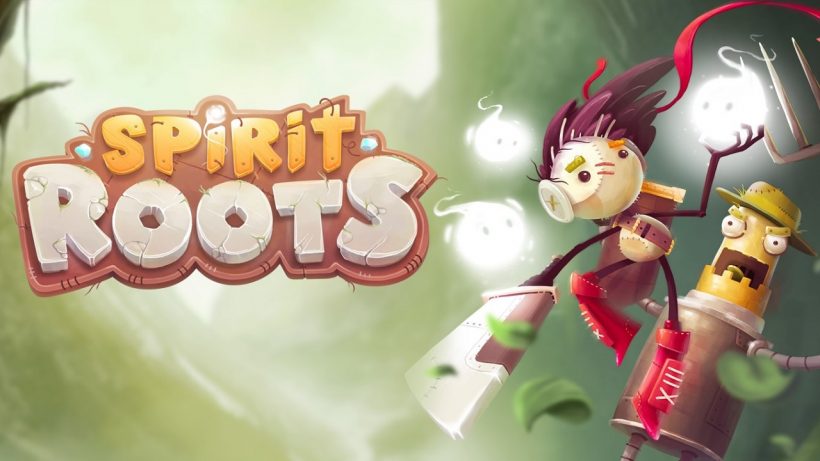 Spirit Roots is an action platformer that sees you traversing the five unique worlds of the “Stitched-Together Planet”. After generations of fighting, the inhabitants of two planets stitched their broken planets together in order to survive, making one peacemaking treaty: that the inhabitants of each planet must never trespass onto the other.

For thousands of years this all went swimmingly, but then the devastating “calamity” broke the planet apart and separated our protagonist from their family. As such, travelling across forbidden borders in order to get back to your family forms the gameplay of Spirit Roots, and you must battle through numerous enemies, overcome many obstacles and gather various collectables as you head to your destination.

This developed backstory creates a sense of purpose behind your actions, but ultimately feels a little bizarre given the artistic direction. The graphics are charming and aesthetically pleasing throughout, with featured environments including idyllic farmlands and snowy peaks, but these do not exactly inspire thoughts of a crisis-stricken planet. One flaw in the design, too, is that certain foreground elements block your vision, meaning some battles or leaps are obscured at the most crucial moments. Certainly not ideal in a platformer as unforgiving as this.

I say unforgiving because several elements of the platforming are relentlessly tough on the player. Though having two weapon types at your disposal and the abilities to double-jump and to climb onto ledges are welcome inclusions, the poor collision detection (including constantly climbing back up ledges when trying to drop off without jumping), lack of traditional platforming movements (e.g. jumping onto platforms from below) and harsh life / respawn system (one-hit kills, anyone?) make this game one you’ll grind your teeth over. Thank God for the inclusion of an Easy – and other – modes.

Each world features different enemies with unique attacks and durabilities. Some can be defeated with one hit, but others require several sword slashes with A or gunshots with Y before they’ll drop. Learning which enemies can be defeated with which attacks and how to avoid them forms part of Spirit Roots‘ challenge, but the sense of accomplishment afforded by this is sadly cheapened by poor hit detection and delayed inputs.

Worse still, you are instantly defeated if you so much as touch an enemy, meaning you’re sent straight back to your last checkpoint or else the beginning of the level if you have no lives remaining. Getting up-close-and-personal is therefore less enticing than shooting from a safe distance.

The boss battles at the end of each world feel the most unfair, not least because of their increased difficulty and repetitive nature. Each boss comes with its own set of unique attacks, and while not impossible to dodge, the platforming designs in these levels don’t make it easy. On a few occasions, when having just clambered onto a ledge, I was still hit by an attack or stray projectile, and in other situations I was forced to memorise attack patterns and movements in order to defeat the bosses, rather than getting to dynamically enjoy the fights.

Thus, though Spirit Roots sports a charming aesthetic and a decent challenge, its gameplay is not enjoyable enough to keep returning to. With repetitive upbeat audio, poor collision detection, cheap combat and frustrating boss battles, it is a difficult game to recommend, though fans of the genre, the aesthetic and a challenge are likely to find some value in playing it.

Spirit Roots‘ charming aesthetics are not enough to warrant suffering through its many monotonous levels. Although some may find enjoyment in the challenges it poses and its platforming, it is more frustrating than fun, especially where its boss battles are concerned.