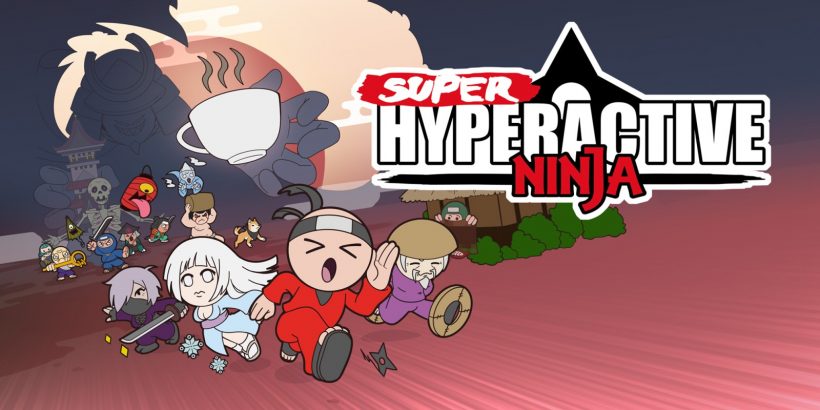 Super Hyperactive Ninja is an action-platformer that has you constantly needing to juice up as the last of the Coffee-Nin. Kohimaru is on a mission to defeat the Shogun’s army in order to save the Legendary Coffee that was stolen. Based on all of these bean-related story beats, you might have guessed that the “juice” in question that keeps you pumping from jump to jump is, in fact, coffee!

In gameplay, this title is similar to something like Super Meat Boy, without the extreme difficulty, but offers its own set of challenges instead of having brutal design. However, lacking the tightness of controls and design that hinders your speed means that you have a title that falls into more of a slump than its high-octane predecessors.

Your ninja-coffee-master of a main character has the ability to jump, but besides a few selectable special abilities for combat, that is the beginning and the end to the diverse control set in this platformer. The main attraction is when you enter “Hyperactive Mode” where you begin to spend your coffee meter in order to move quicker and jump higher. In this mode, you also will be able to wall jump and take down enemies positioned throughout the levels.

I enjoyed the simplicity to how you use your character but will say that the stop-and-go nature of trying to save your coffee, along with the way enemies work, makes this game take that fast-paced angle it wanted and chucks it right into the garbage. Not to say that the slowdown is bad by nature, just feels way out of place compared to everything else, including the title of the game. Controls never feel very accurate, as well, as I regularly found myself missing jumps in Hyperactive Mode that felt good to me.

Level design is very simple and bare-bones, with cookie-cutter layouts for backdrops and platforms. So, in order to supplement this, the developers added enemies, spikes, and flames throughout the levels to give you more to workaround. This was a good idea, in theory, but based on how enemies actually function, they become the main reason for the major slowdown when you want to just go fast. Some face different directions, some flip flop back and forth, while others move and have weapons. Regardless, they all must be defeated by charging at them, in Hyperactive Mode from behind, as ninjas do. This means you will have to stop outright in order to wait for the samurai blocking the tight hallway to face the other way before you can blast him. Also, the ranged weapons the enemies can carry mean you will need to time things and yet another stop will probably be necessary for that to be successful. Unfortunately, this further goes against the entire concept of the game.

Outside of a soundtrack that is quite obnoxious, you have art design that resembles stickers in a doodled notebook of sorts, which I rather appreciated for its uniqueness. Boss battles offer a decent break from the platforming that feels pretty close to unfair. Unlockable characters and items offer some customisation options. Along with a good bit of content from the fifty or so levels and secrets throughout each, you have an overall package that the most hardcore of difficult platformer fans might get a kick out of for a while, but most will be quickly turned off by the lack of polish.

Super Hyperactive Ninja is a fast-paced, action-platformer that fails to keep up the pace. Although there is some fun to be had with a decent content load and speed running potential, there just isn’t enough to keep you motivated.