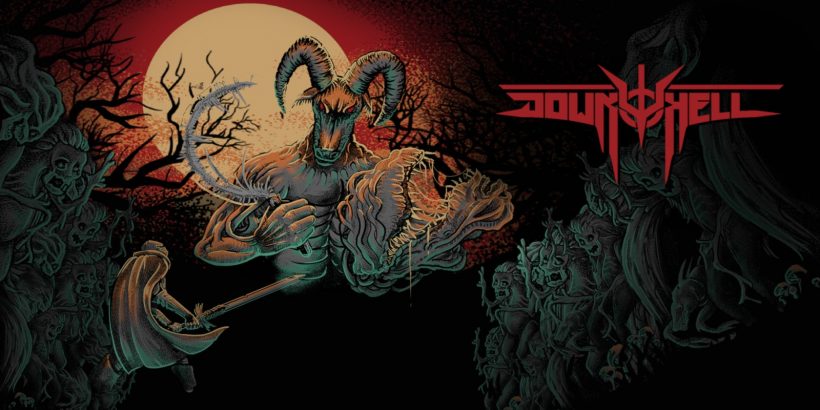 Imagine a game in which the UI sometimes prevents you from being able to see enemies or even yourself. A game in which the hit boxes of bosses seem to fluctuate throughout a fight so that you can never be sure whether you are leaping to safety or into the path of danger. A game in which fast reflexes are vital but inputs lag behind at the worst possible moments. What you’re imagining is Down to Hell.

Down to Hell is a side-scrolling slasher in which an unnamed knight must battle through hell in order to begrudgingly rescue a mysterious girl who previously saved him. The story takes place over two chapters, each of which contain several short (and I mean short) platforming portions besieged by demons before facing off against various bosses using weapons and skills unlocked along the way. On paper, this sounds like a good time. But in practice, basic flaws in the game’s design make Down to Hell one heck of a slog.

Let’s start with the title’s redeeming features though, because there are a few. For example, if you’re looking for a twisted hellscape, this one is stunning. It’s clear that the team includes talented visual designers. The same is true for the bosses. Each demon is imaginative and distinct, and while the way in which they attack may be similar, the fights felt unique because of this. Also, no review of Down to Hell would be complete without mentioning the awesome heavy metal soundtrack that perfectly complements the world.

Sadly though, that’s where the positives end. After all, when a game doesn’t play fair, the urge to rage quit quickly transforms into the temptation to uninstall. As gamers, we thrive on challenging experiences, but we also expect a certain unwritten code to be followed and Down to Hell doesn’t play by the rules. For example, it feels unfair when bosses switch their direction of attack halfway through an animation, inputs don’t register immediately, or hit boxes change arbitrarily throughout a fight sequence.

Of course, plenty of games embrace a die, revive, repeat gameplay style and do so very well. But when death is an integral part of gameplay, that loop must be as short as possible. The lengthy load screens in Down to Hell only serve to add to the player’s frustration.

Perhaps unsurprisingly, there are no difficulty options in this game which may make it inaccessible to some. But if you can get past the first two boss fights and learn how to work with the game’s quirks, things become much easier (something the studio oddly admits itself). In fact, a basic sequence of dash in, attack, and retreat is enough to slay most demons.

Interestingly, the studio made the decision to focus on fighting rather than hero development and at the game’s conclusion you are reassured that Chapter 3 is on its way. But when you rely on gameplay rather than narrative to grow a dedicated following and the mechanics feel flawed, it’s hard to see many players returning to the series.

That said, despite its issues, it’s clear that Down to Hell has potential. While the underlying tale could use work in terms of character development and differentiation, the idea of a game that focuses on gory boss battle after gory boss battle is interesting. But in its present state and at its current price, this one is probably worth a pass.

Down to Hell is a side-scrolling slasher in which you battle through hell to rescue a girl who previously saved you. But unless you feel brave enough to navigate some basic design flaws, you might be better off saving yourself.